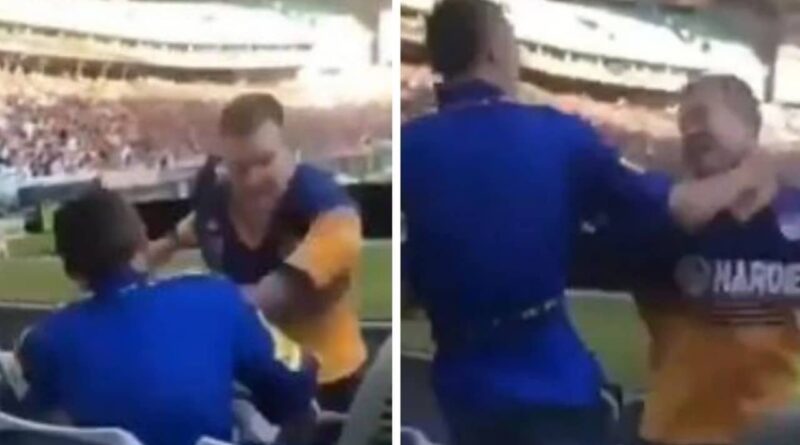 Angry rugby league fans have been filmed throwing punches at each other in a wild fight in the stands during Parramatta’s win over the Wests Tigers on Easter Monday.

Footage of the shocking incident was posted online on Monday evening, showing two Eels fans and a Tigers supporter involved in a violent altercation.

One man, wearing a Parramatta jersey, approaches another man, who is sitting in his seat and also wearing blue and gold. The man standing up then punches the other man in the head with his left hand.

That prompts the man who was hit to stand up and grab the other spectator by the throat, before both throw punches, but don’t appear to connect with any of them.

A supporter in a Wests Tigers jersey then enters the picture, and takes a swing at the man who threw the first punch seen in the video clip.

A security guard then intervenes to break up the fight and separate the men.

Things turned ugly in the stands.Source:Twitter

Parramatta beat the Tigers 36-22 at Stadium Australia to maintain its unbeaten start to the year, sitting alongside Penrith on top of the ladder.

Blake Ferguson scored two tries for the Eels but endured a horrible first half, losing his feet and dropping multiple balls as he completely lost his bearings.

He enjoyed a much more fruitful second half, having put his litany of comical errors behind him.

“I’ve got a memory like a goldfish, I forgot all about them,” Ferguson told Fox League. “Stay in the moment. What’s the most important thing you can do now, what’s in front of you.

“I try to stay in the game and just don’t dwell on that type of stuff. It’s bad when you start thinking about stuff that happened 10 minutes ago and it creeps into your game.

Meanwhile, Fox League commentator Braith Anasta called out the NRL’s “double standards” after the same rule was applied differently across the weekend.

The Roosters were denied a try in their win over the Warriors on Sunday night when James Tedesco was pinged for a shepherd after running behind a teammate, despite gaining no concrete advantage.

Eels halfback Mitchell Moses ran behind three Parramatta players in the first half before grubbering for Marata Niukore to score. However, the video referee let it slide and the try stood.

“Last night it’s no try, today it’s a try. It’s got to be more clear and just black and white,” Anasta said.