Carlton midfielder Marc Murphy has escaped serious injury but his pre-season has been interrupted by an ankle injury ahead of next month's community series opener.

The Blues opened their doors to supporters at training on Monday but the club faithful were left concerned when the veteran onballer was hurt during match simulation. He was taken from the field on a golf cart and sent for scans.

However, serious fears were allayed when the scans confirmed low-grade bruising to his right foot. The Blues said Murphy's training program was expected to be modified for one to two weeks.

The injury has come at an unfortunate time for the 32-year-old, having enjoyed a strong off-season in a year the Blues hope finally to push for a finals berth. 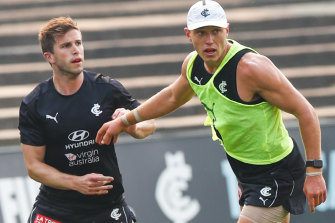 After a 2018 campaign when he was restricted to 13 matches because of injury, Murphy regained his groove last season. He played in 19 matches, his form particularly robust later in the campaign when, after the departure of Brendon Bolton, interim coach David Teague shifted him back into the midfield. He had been used regularly on the wing, as Bolton had wanted to develop more depth at centre bounces.

He had 34 touches and booted the winning goal against Fremantle in round 15, had 31 touches in a win over Adelaide in round 19, and 27 touches in a round-22 victory over St Kilda.

The 268-game veteran is set to pass Anthony Koutoufides (278 matches) and Justin Madden (287) and move into sixth spot on the club's all-time games record list.

The Blues need Harry McKay and Charlie Curnow to have a major impact but the key forwards are still nursing injuries. McKay has a groin problem and continues to be restricted to running laps around the boundary, while Curnow did not participate in on-field activities on Monday while he recovers from knee surgery.

Curnow fractured his patella tendon in November, having slipped on tiles. It was the second time this off-season he had required surgery, having dislocated his right knee cap and had a ligamentous repair to stabilise the patella.

Co-captain Patrick Cripps is primed for another superb season and took to the field having had Chinese cupping therapy. This involves having cups placed on the skin to create suction, which can facilitate healing with blood flow.

Sam Docherty, also a co-captain, was in excellent touch and appears set to return in time for round one from successive knee reconstructions. The Blues will need his crafty ball use across half-back if they are to build on last season's impressive finish when they won six of their final 11 matches. 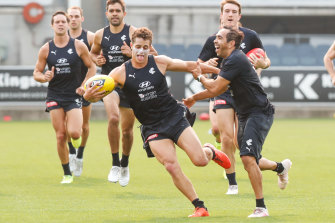 Eddie Betts drew the applause of fans with his work close to goal, the goal sneak having returned to the club since departing after the 2013 campaign.

The Blues open their community cup series against Fremantle in Mandurah on February 29.

Meanwhile at Punt Rd, superstar Tiger Dustin Martin impressed in his return to the club for the first time since the Christmas break, having spent time training in Japan. 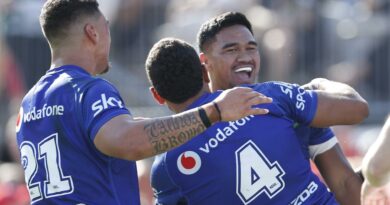 A tight Warriors win? Roger that