Home » Rugby League » ‘Something that we can’t stand for’: Grundy says De Goey’s alleged behaviour is not on

Collingwood star Brodie Grundy says Jordan De Goey’s alleged behaviour, which has seen him front a New York court, is unacceptable and insists the fallen forward is a “big enough boy” to handle being banished from his teammates.

De Goey’s hearing on assault charges has been adjourned until January 4 and the New York Criminal Court will decide his fate on January 18 after he appeared in court via video link last week. The charges stem from a night out in New York in late October. He had previously pleaded not guilty. 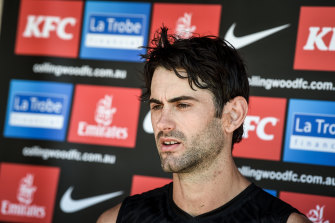 The Magpies responded to De Goey’s latest off-field issue by banning him from returning to the club to join in pre-season training with his teammates. While the club continues to pay him in-full and has provided welfare support, De Goey is training with Leopold, coached by Geelong great and former Collingwood assistant coach Garry Hocking, in the Geelong Football League.

Grundy, part of a seven-man leadership group last season, said the Magpies had worked hard on a cultural overhaul, largely in the wake of the Do Better report, and said De Goey’s alleged behaviour was unacceptable.

“Like I said, we have gone through a lot as a football club over the last 18 months, two years. We are working really hard to make this club something that we are proud of,” Grundy said on Monday.

“Like I said, that alleged behaviour is something that we can’t stand for so until that plays out – that is something we know more about – Jordan will be spending time away.”

Grundy said he had been in contact with De Goey via text, checking on his wellbeing, but reiterated his alleged actions in New York were not what the club stood for.

“Actions are one side of it, there is the human side as well. You do empathise with him being overseas, by himself at that point (De Goey’s friend Luke Dyson was also charged), you do think it would be scary, but, obviously, the alleged behaviour is something we can’t stand for at this football club,” Grundy said.

“But, having said that, Jordan is still a Collingwood player and we support him. Like I said, we reached out, we have been in constant conservation with him, and [we’re] hoping as a person he is doing the best he can.”

De Goey and his manager Ryan Vague had wanted the match-winning forward-midfielder to be able to at least train at the club while the court case was ongoing, but that request was denied – a call Grundy endorsed. 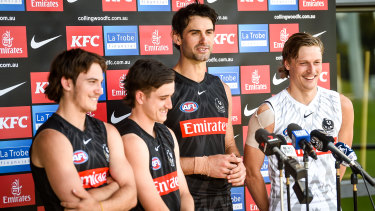 “Until things play out, I am just supporting what the club is putting in place. Jordan is entering his eighth season now, he is a professional, I think he’ll be a big enough boy training away from the group and that is going to play out in the next five to six weeks,” Grundy said.

De Goey is missing valuable time in which the Magpies are learning a revised game plan under new coach Craig McRae. Grundy said it would be up to De Goey to get up to speed as soon as possible, should he be welcomed back to the club.

“There is no reason why Jordan can’t be upskilled in the game plan and any stuff like that,” Grundy said.

“It’s just going be on him, it’s going to be a challenge for him to be able to keep up his conditioning and to come in, but I am sure, if and when that happens, he will be desperate to put his best foot forward.”

The Magpies, set to have a new board later this week with Jeff Browne the likely president, will wait until De Goey’s case is settled in court before making their own call on his future. Depending on the verdict, their options include suspending him, or not playing him for the rest of the season.

De Goey is a free agent next season but had held preliminary contract negotiations with the club before finding himself in more trouble.

He had been training in California as part of his contract with Monster Energy and took a break in Manhattan for Halloween, where he allegedly became involved in a scuffle.

He faces four charges, including assault with intent to cause injury, in the New York Criminal Court. The Magpies, with the AFL’s support, stood him down indefinitely after the news broke. This latest incident adds to the frustration the Magpies are feeling.

In August, prosecutors withdrew an indecent assault charge stemming from an alleged incident in 2015.

In a separate case in August, he was fined $2075 after pleading guilty to road offences, including speeding while driving a sports car when he was a P-plater, and sending text messages when stationary at traffic lights.

In 2018, De Goey was caught drink-driving while on his P-plates and fined $10,000 and suspended by Collingwood. That incident came a year after he was suspended by his club for lying about how he suffered a broken hand in a bar fight in St Kilda.

On a day Grundy unveiled South Australian draftees Arlo Draper, Cooper Murley, and Harvey Harrison, he revealed he had shed three kilograms in the off-season in a bid to return to his best form. He finished sixth in the Copeland Trophy count last season.

“I have lost a few kilos, trimmed up, just trying to give myself the best opportunity to play my best footy. I think that starts with having a pretty good pre-season and just getting as fit as I can,” he said.

‘Why can’t it be us?’: Gresham could be missing link as Saints chase elusive flag 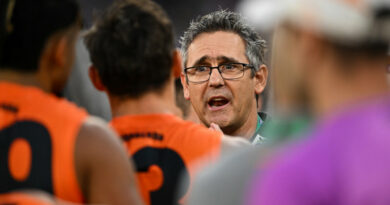 If Cameron’s time at Giants is ending, he can leave with head high