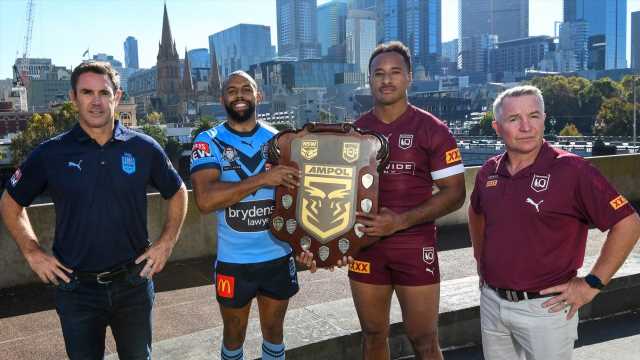 With the State of Origin teams being announced for NSW on Sunday and Queensland on Monday, the respective coaches will be watching the weekend through their fingers as the injury and suspension carnage has continued.

One game into round 12 of the season, three more players who would have been considered certainties are facing stints on the sidelines.

NSW saw an injury to Broncos prop Payne Haas, with the star set to spend at least two to four weeks on the sidelines with an medial cruciate ligament injury in his knee in the first half last night’s match against the Storm.

As hoped just a minor MCL sprain for Payne Haas, Broncos expecting it to settle quickly. Most able to return to play within 1-3 weeks, with 12 days til Origin 1 still has a chance of being fit for selection

There is still some hope for the Blues in Haas but it could come down to choosing an injured player for the toughest game of the season, although scans today showed it was a minor MCL sprain.

Payne Haas could still be alright for Origin.Source:Getty Images

The issues for NSW

— Boyd Cordner yet to return from serious concussion-related head injuries

— Luke Keary out for the season

— Damien Cook under threat to lose the No. 9 jumper to Api Koroisau

— Broncos star Tevita Pangai and Penrith’s Liam Martin are putting pressure on incumbents to force their way into the Blues 17.

— Payne Haas knee injury in round 12

Plenty of options are off the table for both teams.Source:Getty Images

But NSW aren’t the only side hit with the Maroons set to lose two more players with Newcastle’s Kalyn Ponga facing a groin complaint.

Ponga has been on the sidelines since round 9 and is projected to miss his third straight game in Sunday’s match with the Manly Sea Eagles.

But the Maroons could also miss second rower Felise Kaufusi, who will miss Origin for an early guilty plea for a trip on the Broncos’ Jake Turpin in Thursday night’s game.

It’s Kaufusi’s third charge of the season after copping two weeks for his dangerous contact on the Eels’ Ryan Matterson and was fined for contact on the Rabbitohs’ Cody Walker.

The Storm already indicated they would challenge the charge.

With Storm coach Craig Bellamy reporting hooker Harry Grant may be over his hamstring injury before Origin, he was more bullish on Cameron Munster and his foot injury.

Munster has a Lisfranc injury, which can sideline players for four to six months.

The man behind the NRL Physio Twitter account Brien Seeney said Munster may still have a chance but would need everything to go right.

“The fact Munster commenced running with two weeks until Origin I does give him a chance of being fit for selection,” he told The Daily Telegraph.

“But everything would have to go perfectly between now and then, which still leaves him in significant doubt considering the nature of Lisfranc injuries.”

The issues for Queensland

— Corey Allan in a race to be fit, but also likely to be overlooked

— Edrick Lee injured, likely to be replaced by Xavier Coates

— Jake Friend retired, likely to be replaced by Reed Mahoney

— Kurt Capewell suspended for Round 12, but available for Origin selection

— Lindsay Collins out for the season

— Kalyn Ponga out of round 12 with injury

Smashing NSW will have to wait for Rebel from Queensland