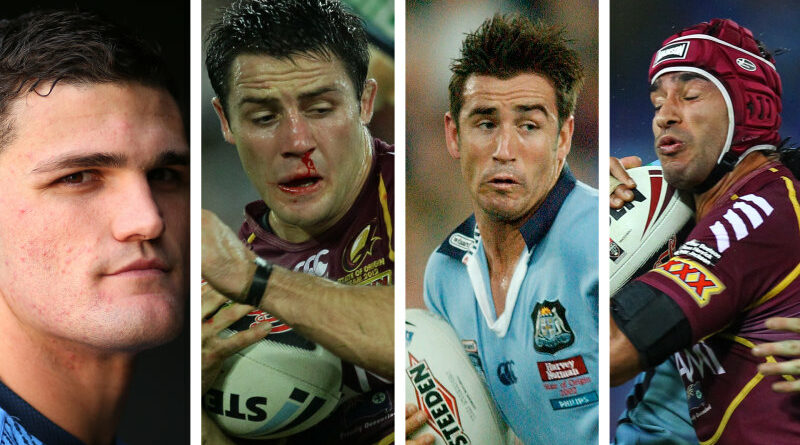 So how does Nathan Cleary stack up against the greats?

It is probably fair to argue that until he wins a premiership, or plays a dominant hand in a NSW State of Origin series triumph, comparisons to Andrew Johns, Johnathan Thurston and Cooper Cronk are disrespectful to three of the greatest No.7s of all time. 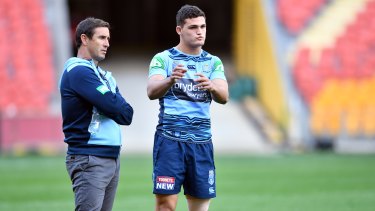 Andrew Johns and Nathan Cleary with the NSW Blues.Credit:NRL Photos

At least comparisons to the all-conquering final versions of those three halves would be, but what about to the 23 year, 204-day versions of them?

“When he first started I didn’t see greatness in Nathan, but I didn’t see it in Cooper Cronk either,” Peter Sterling admits.

“There were hints of it in JT (Thurston) because he’s such a competitor, but to me Joey (Johns) is still elevated above everyone in regards to halfbacks. The one thing about Nathan is that he regulates the tempo of the game, and that’s why Cameron Smith was such a great player.

“He knew what periods of the game required a particular type of tempo. Nathan Cleary is getting a better understanding of that and is maybe superior at the same stage in his career to a young Joey and JT.”

When you take a look into the numbers, basing it off accomplishments achieved by the age of 23 and a half, Cleary more than holds his own.

He has played more games, 111 to be exact, than all of them. The closest to that mark was Johns with 76 at the same time in his career.

He’s kicked more goals and at a higher percentage than both Johns and Thurston. His winning record is also superior to both, notching a 65 per cent win rate since debuting as a 17-year-old in 2016.

Cronk enjoyed a better win ratio, but 23 of his 74 NRL appearances by that age came off the bench in a star-studded Melbourne Storm side.

Cleary has scored more tries, more points and more field goals than all three, yet the knock remains his perceived inability to come up with the right play at the right time on the biggest stage.

While he’s won an Origin series as James Maloney’s right-hand man, the time has come for him to deliver as the general of the team. The failure of last year’s grand final is fresh in the minds of those who measure greatness by results in the games that matter.

All four players had reached a grand final by 23. While Johns and Thurston both enjoyed victories, only Johns did so as a starting half in the iconic 1997 grand final.

“Your CV is important,” Sterling said. “You need to be in a premiership-winning side to have the gravitas those other players have. 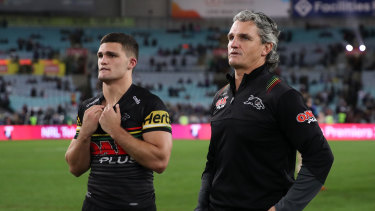 “Going through the grand final last year, that’s tough. There are a couple of decisions I’m sure he’d like to make differently. But you have to go through those things as well. To lose a grand final, the fire burns.

“He’s had a wonderful football education in a short period of time that is going to make him some player in years to come if he stays healthy. I’d like to think we will be talking about him in the same way as the others when his career ends. His best football is still not for another two or three years, I think.”

Legendary All Blacks coach Steve Hansen will arrive in Australia at the end of the week as part of a 10-day business trip with the Canterbury Bulldogs.

The Bulldogs, who announced Hansen’s appointment with great fan fare last year, have been waiting eight months for him to walk through the doors at the club’s Belmore facility. He will touch down in Sydney on Thursday night and will attend the club’s next two matches against St George Illawarra and Parramatta. 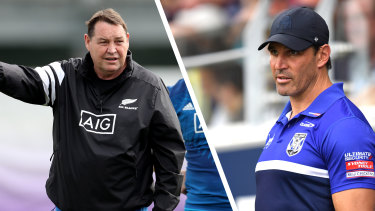 Hansen is regarded as one of the best coaches in all sports, leading the All Blacks to 93 victories from 108 Tests as head coach. He lost to Australia just three times in 22 games, including the 2015 World Cup final at Twickenham.

Canterbury announced Hansen as the club’s high performance consultant last October, however international travel restrictions due to COVID-19 had prohibited Hansen from fulfilling his commitment in person.

Hansen has been in regular contact with coach Trent Barrett and his staff over the phone and Zoom, however the Bulldogs have been desperate for him to share his knowledge and expertise in person. 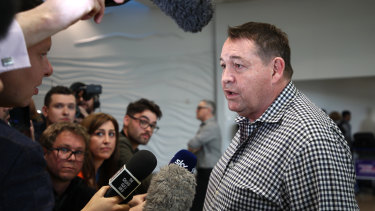 Steve Hansen arriving in New Zealand after the World Cup in 2019.Credit:Getty

Barrett has an existing relationship with Hansen, having spent time with the All Blacks on previous study trips.

His knowledge and ability to implement culture and set standards will be invaluable to a Canterbury team trying to discover its identity.

Hansen will not only work with the players and coaching staff, he has been allocated time to work with the club’s office staff and visit sponsors.

Hansen is also a horse racing enthusiast. He is a part-owner of champion sprinter Nature Strip, a winner of six group 1 races including the TJ Smith Stakes in 2020 and 2021. The six-year-old will again run in The Everest, the world’s richest race on turf, in October.

Hansen will be wined and dined by ARLC chairman and Racing NSW boss Peter V’landys during his time down under.

It’s no secret Gareth Widdop is eyeing a return to the NRL, and talk out of the United Kingdom suggests it could come in the form of the New Zealand Warriors.

We’re hearing the Warriors are keeping a very close eye on Widdop’s performances in the Super League, contemplating a play for the former Melbourne and St George Illawarra five-eighth for next season.

Widdop’s children are now living with their mother in Australia, with Widdop desperate to move closer to them. 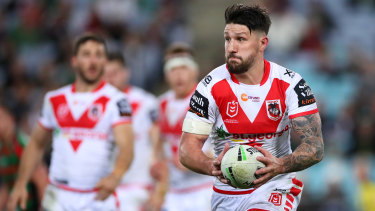 Gareth Widdop could make a return to the NRL with the Warriors next year.Credit:Getty

A contract with the Warriors still has its obstacles given travel limitations and potential restrictions, but it could provide him with an opportunity to see them more regularly.

The Warriors went after Nicho Hynes, offering a three-year $1.5 million deal. They were blown out of the water by the Sharks. Widdop appears to be their next target.

The cheeky Wests Tigers have beaten Stephen Crichton at his own game, dragging him into post-try celebrations after Stefano Utoikamanu’s victory-sealing try at Leichhardt Oval.

Crichton polarised rugby league fans earlier in the year when he brought Joseph Tapine into Panthers celebrations. It prompted accusations of arrogance. 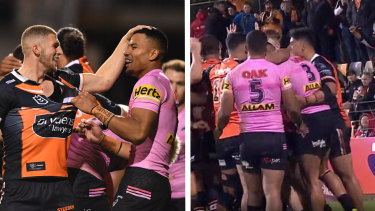 After Adam Doueihi taunted Crichton, former Panthers backrower Shawn Blore and centre Tommy Talau did their best Crichton impersonations by wrapping their arms around him as the Tigers celebrated an upset win. Credit to Crichton, he took it with a smile on his face.

Before he made his debut against the Storm on Saturday night, the Gold Coast Titans had opened negotiations with Jayden Campbell to ensure he remains at the club.

The 21-year-old son of legendary Titans five-eighth Preston Campbell had an up-and-down night in his opening outing in the NRL, but showed glimpses of why he is so highly regarded. The try-saving tackle on Nicho Hynes late in the game, as well as his ability to break away from defenders, suggest he has a very bright future.

The Bulldogs have upped how much they are willing to pay of Dallin Watene-Zelezniak’s $850,000 salary for him to play elsewhere next season.

The Bulldogs are willing to play close to half, with the Wests Tigers considering paying the other half of his salary next year, as well part of his salary this year. It averages out to be around $300,000 per year for the next two seasons if it goes through.

The NSW Blues had organised for Craig Bellamy to address the players the night before the State of Origin series opener in Melbourne. Unfortunately the change of scheduling has put it on the backburner.