Grant went off the field during the captain’s run complaining of tightness in his groin ahead of the Storm’s clash with Manly at AAMI Park on Thursday night. 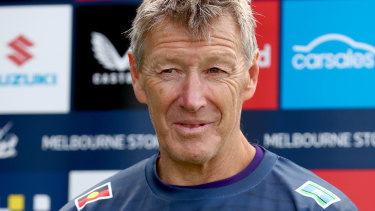 Losing Grant would be a big blow for the Storm considering they have lost their past two games and are still adjusting to being without full-back Ryan Papenhuyzen and prop Nelson Asofa-Solomona, who are both out injured. 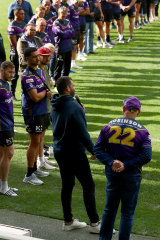 Greg Inglis speaks to the players and coaches of his former club.Credit:Getty Images

Bellamy was more confident half-back Jahrome Hughes (calf) would return to face the Sea Eagles after he trained on Wednesday, though he will also be watched carefully on game day in case he wakes up sore.

“Jahrome got through today’s session. He hasn’t done all [the training] that we have done this week,” Bellamy said.

“He got through most of it and seems to have come through OK, so he seems like he should be all right.”

Hughes has missed the past two games and his return will be crucial to the Storm’s ability to find a way past Manly’s defence, especially as the Storm are on a five-day turnaround after losing to North Queensland on Saturday.

The Sea Eagles are making adjustments of their own after losing superstar full-back Tom Trbojevic to a season-ending shoulder injury and Bellamy was disappointed to see injury again sideline the New South Wales playmaker.

“I don’t think anyone in the rugby league world likes to see Tom out, as he has had such a tough run and is such a good player to watch,” Bellamy said.

Meanwhile, Storm great Greg Inglis returned to the club this week and will lead the Storm out on Thursday night. Inglis will represent the side for the gift swap with the Sea Eagles, and he also joined the team for a traditional smoking ceremony on Wednesday, addressing the team.

The Storm will also wear their Indigenous jersey designed by Yorta Yorta, Gunnai, Gunditjmara and Wurundjeri man Coree Thorpe. Thorpe based the purple, yellow and orange jersey design on the mythology of the Rainbow Serpent. 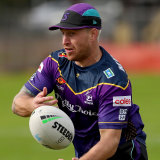 Bellamy said he was happy to see Inglis back at the Storm and joked he could still play a role for the side.

“A lot of these guys were babies when he played, but they were all rapt to see him,” Bellamy said.

“He spoke to the group and while he is a man of few words, what he said was from the heart. It’s great to have him back.

“I’d love to play him somewhere as we have a few injuries. He still looks like he could still go around for a little bit, he would probably only last 20 minutes, but that might be all we need from him.”