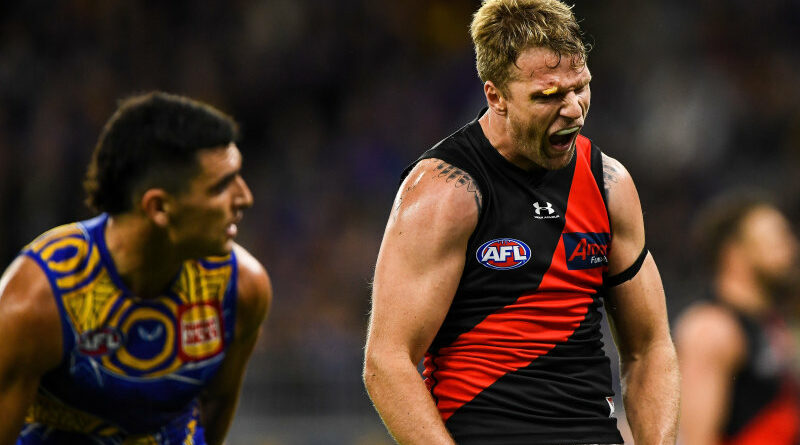 Essendon’s impressive rebuild under coach Ben Rutten has continued, this time with the Bombers rebounding from a 29-point deficit to topple an injury-hit West Coast at Optus Stadium on Saturday night.

The Eagles were left undermanned when star midfielder Tim Kelly hurt his knee in the second term and did not return, while versatile tall Oscar Allen had his night curtailed at the main break because of a head knock. 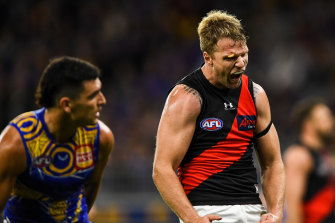 Jake Stringer had a big night for the Dons.Credit:Getty Images

When former Eagle Alec Waterman gave the Bombers a double-digit lead with minutes to go, the Bombers had one of their best wins of the past decade.

The Bombers trailed by almost five goals in the second term when the Eagles booted six for the quarter and had an unblemished nine on the board by half-time. The Eagles’ lead was cut to 17 by half-time but became 25 early in the third term when Josh Kennedy converted in wet and slippery conditions.

However, the Bombers responded in style, booting four straight goals to trail by only three points at the final break.

Kelly was hurt after he slipped and stretched his right knee at a centre bounce in the second term.

He finished the night with a brace on and is in doubt to face Carlton.

Elliot Yeo made an immediate impression when he and Kelly laid a big tackle at half-forward, the ball spilling free and allowing Jack Petruccelle to dribble through a long goal. Yeo had not played an AFL match for almost nine month because of osteitis pubis but remains central to the Eagles’ premiership hopes. 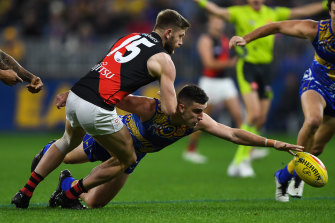 Elliot Yeo and Jayden Laverde battle for the ball.Credit:Getty Images

Tall forward Peter Wright (calf) was a late withdrawal but Bombers teammate Harrison Jones made the most of a reprieve when he marked on the lead in front of Allen and slotted through his team’s opening goal.

The holding-the-ball interpretation was again called into question when Josh Kennedy was awarded a free kick for a push in the back despite what seemed a legal tackle by reborn defender James Stewart which could have rewarded the Bomber with a free kick of his own. Kennedy made the most of the shot on goal from 20 metres, giving the Eagles the first goal of the second term.

Kelly’s injury meant Jake Waterman was subbed on and the “medical mullett”, as Eddie McGuire dubbed him, had an immediate impact when he used his strength to withstand a tackle and banana through a goal in a dominant second term for the home term. It hadn’t been a great start for Waterman’s brother Alec, the former Eagle and now Bomber, who sprayed a shot out on the full. However, Jake’s night took a turn in the third term when he conceded two free kicks, gifting goals to Cale Hooker and Nik Cox.

Gawn and Viney to miss clash against Kangaroos

Sonny Bill Williams on the hunt with Toronto Wolfpack