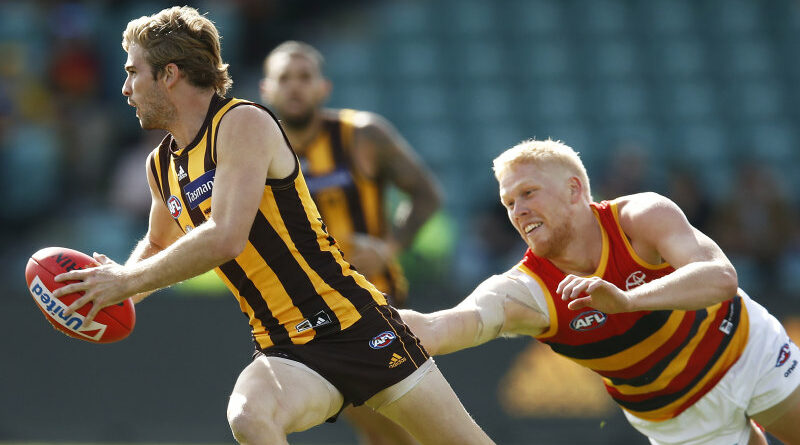 Despite the loud game of musical chairs Hawthorn tried to play in last month’s trade period, there are just four Hawks who played in the draw against Richmond in Alastair Clarkson’s final game as coach who will not be at the club next season.

Then, on October 14, Hawthorn announced they had delisted small forward Ollie Hanrahan after 29 games, a decision that surprised many external observers. 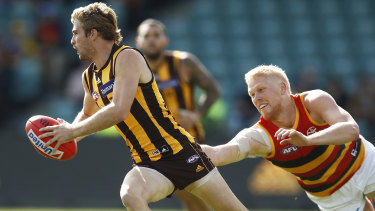 Although the 23-year-old knew there were no guarantees he would be re-contracted, hearing the news that he wouldn’t be still shocked Hanrahan as he had played in the final three matches – all wins – at the end of his fifth year at the club.

After an inconsistent start to the season, he had rediscovered his form playing in the middle at Box Hill and ended the season playing good football.

But with list spots tight and a shift under new coach Sam Mitchell, it was a poor time to be out of contract.

Hanrahan processed the information with the thought that “everything happens for a reason” and then got to work in an attempt to impress clubs enough to show them he was ready if they came knocking.

His name was linked to several clubs immediately after the trade period, but most were less likely than likely destinations at that point, unless something changed.

“I’ve been working as hard as I ever have in the past few weeks. I feel like it has actually made me more hungry and more determined, and it is pushing me even more,” Hanrahan said.

Hanrahan arrived at the Hawks in the 2017 rookie draft after impressing in school football, rather than in the traditional pathway. He sat behind Luke Breust, Paul Puopolo, and Cyril Rioli in the pecking order for small forwards in his first two seasons, before playing 13 consecutive games after making his debut in round 15, 2019.

He was named the club’s best first-year player in 2019 but found himself out of the team in the week the club went on the road due to COVID, and the Hawks’ season began to derail as they became locked down in hubs and dropped off the pace.

By that time Rioli had retired but Hanrahan continued learning alongside Breust and Puopolo, who backed him to the hilt.

“They were awesome. ‘Poppy’ and Luke put so much time and effort into me,” Hanrahan said. 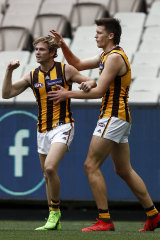 Hanrahan celebrates a goal against Richmond at the MCG.Credit:Getty Images

“At first, I was a bit in awe of them and did not want to step on their toes, but by the end of it I was like ‘nah, I want to get my own spot in that team’.”

Clarkson supported him, too, but left Hanrahan in no doubt that he needed to strengthen his defensive skills to cement a spot in the team.

“[He] was the one telling me if you want to play that small forward role, your pressure and defensive work has to lift,” Hanrahan said.

He also added another string to his bow, with Mitchell playing him in the midfield at Box Hill after Hanrahan approached him seeking an opportunity further up the ground, where he could use his speed and agility.

“Sam was great. He gave me a licence to play midfield in VFL and said ‘go do Ollie things’. It could be a blessing in disguise, as other clubs know I can play midfield,” Hanrahan said.

As he remains in football purgatory, he is running three times a week in Brighton and doing weights afterwards. He also boxes daily with a personal trainer at Duncan Mackinnon Reserve in Melbourne’s south-east, preparing as though pre-season at an AFL club is just around the corner.

An accomplished cricketer as a schoolboy, Hanrahan’s only focus is football nowadays. He even laughs at any suggestion he might find himself in whites, having not picked up a cricket bat for six years.

He left behind a memory at Hawthorn with his equalising goal for the Box Hill Hawks in the final seconds of the 2018 elimination final against Port Melbourne, which propelled the club to a premiership. He laughs at how everything just fell into place in that final sequence of play.

Now, he faces a similar prospect of hoping that everything aligns to land him an AFL list spot, which is harder to find than a parking spot at a shopping centre on Christmas Eve.

‘It should be a given’: Ferguson says NRLW deserves equal footing 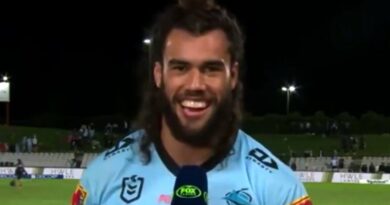