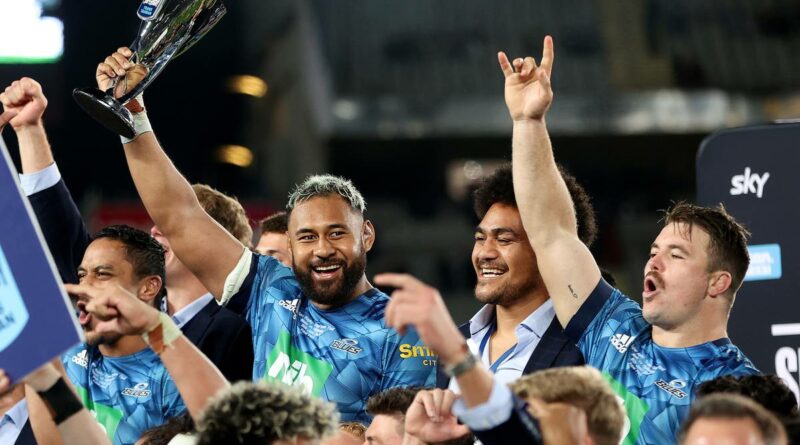 The wait is over – the Blues have claimed their fourth Super Rugby title, 18 years after their last triumph.

The Blues were not pretty, convincing or clinical in a scrappy transtasman final against the Highlanders.

The 35,000 who flocked to Eden Park did not care, though. New Zealand’s perennial underachievers have their moment to savour, thanks to a couple of unlikely heroes.

Replacement first five-eighth Harry Plummer slotted a 46-metre penalty to regain the lead with 10 minutes remaining but only after a 77th minute Blake Gibson try following a Hoskins Sotutu turnover – and Plummer conversion – could the Blues breathe easy.

It was high stakes drama with the unfancied Highlanders pushing the Blues to the brink.

Claiming the transtasman title – a one-sided six-week competition set to be superseded by a new 12-team league next season – does not compare to the three previous Blues Super Rugby crowns in 1996, ’97 and 2003.

Yet it is a significant breakthrough for Leon MacDonald’s budding group, one they will rightly celebrate after rebounding from failing to reach the Aotearoa final.

In the end the Blues deserved their title, having scored two-tries-to-one and dominated most aspects. But they sure did it the hard way, causing MacDonald heart palpitations along the way.

Ash Dixon found himself at the centre of a controversial instance in the first half when he was extremely fortunate to escape a red card for his high shot on Otere Black in the 24th minute.

Dixon, playing his 100th game for the Highlanders, made contract with Black’s head and despite there being minimal mitigating factors, the officials somehow came to the conclusion a yellow card was punishment enough.

Black left the field for an HIA assessment, which he passed, following the hit but while Dixon was off the field the Highlanders did well to mitigate the damage with both teams slotting one penalty as the Blues’ impatience on attack cost them striking further telling blows.

The Blues were, likewise, lucky to collect three points on half time after referee Mike Fraser missed a clear offload travelling forward from Rieko Ioane to brother Akira.

The 13-6 half time margin did not reflect the largely one-sided nature of the contest with the Blues dominating territory, possession and running for more than double the metres.

Time after time, though, the Blues produced headless plays to leave the door open for the Highlanders to comeback. The visitors lived off scraps, with the Blues providing plenty.

The Blues’ lack-of-attacking-execution theme continued in the second half with Black missing a kickable penalty; Akira Ioane being held up, Heem throwing a forward pass to Dalton Papalii steaming down the touchline and Sotutu losing the ball lunging for the line.

Panic frequently crept into the Blues ranks. Rather than patiently waiting for the right opening they instead went with the one out heroic play option.

The Highlanders were, as always, tenacious. They hung tough; made 68 more tackles than the Blues while defended their own line for long periods. They won crucial breakdown penalties – Japanese international Kazuki Himeno standing out in this regard once again.

After absorbing avalanches of pressure inside their own 22, two Mitchell Hunt penalties brought the Highlanders within one point and when Josh Ioane knocked over a 47-metre strike, the Highlanders took the lead with 13 minutes remaining.

The Blues decision-making could be summed up by captain Patrick Tuipulotu looking to the sideline to determine whether to take the shot or kick to the corner. Tuipulotu spotted assistant coach Tana Umaga pointing to the sticks, and Plummer calmly stepped up to nail the shot that ultimately gave the Blues confidence to secure the victory.

The Blues were disjointed, nervy, through the early stages. Finlay Christie sent his first kick out on the full; Otere Black dropped the ball in contact after being rushed and Zarn Sullivan fired one wayward pass.

Only when the Blues forwards began their physical onslaught did the locals shake off the occasion. Turning down two shots at goal the Blues overpowered the Highlanders at scrum time with Nepo Laulala reminding Ethan De Groot who is boss.

From the second dominant scrum near the Highlanders line, Black sent a pin-point cross-field kick into Mark Telea’s unmarked arms and he brushed off Josh Ioane to finish the opening try.

To a man the Blues work at the breakdown was ferocious. Defensively their line speed and aggression in contact often trapped the Highlanders well behind the advantage line, forcing the visitors to kick. Papalii led the charge on defence with several huge spot tackles.

Attacking wise it was a different story, but the ending is the only part that matters now.

The Blues can call themselves Super Rugby champions again. That alone will ruffle a few feathers and bring an added edge to next year’s competition.