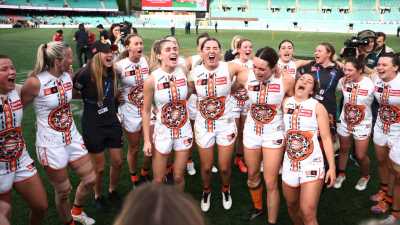 Greater Western Sydney have kick-started their season with a commanding 47-point derby triumph over Sydney in the first AFLW match at the SCG. 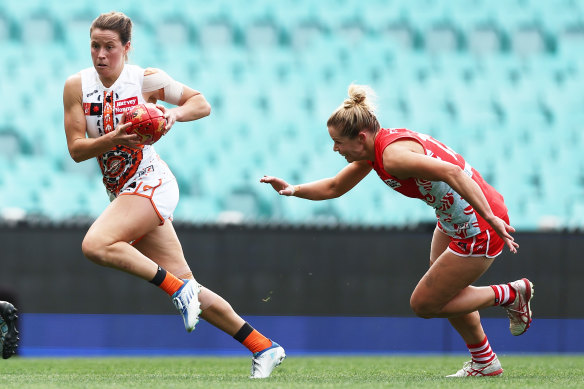 The Giants’ Nicola Barr etched her name in history with the first goal of the match.Credit:Getty

The inaugural No.1 draft pick, Barr again put her name in the record books when she snapped the opening major of the match to become the first goalkicker in an AFLW Sydney derby.

The Swans (0-3) made a bright start but could only manage two behinds before the Giants (1-2) worked into the game and the floodgates soon opened.

The experienced Giants midfield proved too slick on the outside and finished on top 246-170 in disposals, as Alyce Parker (22 possessions) and captain Alicia Eva (19) led the way.

Meghan Gaffney showed good signs and used the ball well in her first game for the Giants, while fellow debutant Zarlie Goldsworthy added a highlight in the third term with a clever goal and enthusiastic celebration with family and friends near the fence.

Veteran Cora Staunton slotted two majors and made sure there was plenty of spice in the first clash between the crosstown rivals in a running battle with Swans defender Alana Woodward.

The Swans moved the ball forward often enough to only trail 35-25 in inside 50s, but failed to make the most of their opportunities near goal.

Rebecca Privitelli was one of the main culprits and finished with 0.3 but the 27-year-old was one of the Swans’ better attacking options against her old team.

Ally Morphett was another former Giant among the Swans’ best players, the young ruck making her presence felt around the stoppages while Lisa Steane had a quieter first outing after switching clubs. 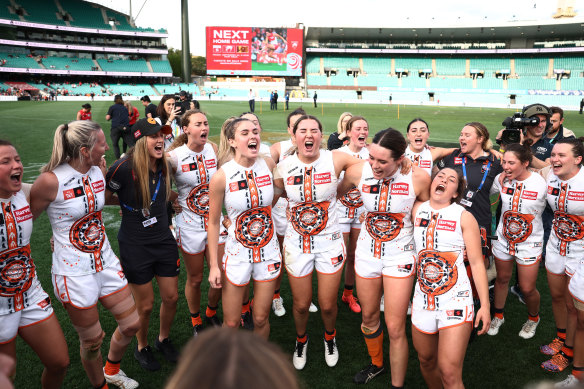 The Giants were in full voice as they celebrated their big win.Credit:Getty

Alexia Hamilton was thrown forward and kicked the Swans’ only major of the first half following a strong pack mark in the goal square, while Brooke Lochland added another just after the main break.

GWS head to Giants Stadium for the first time in season seven to host West Coast on Saturday, while the Swans will be on the road to face Port Adelaide later that day. 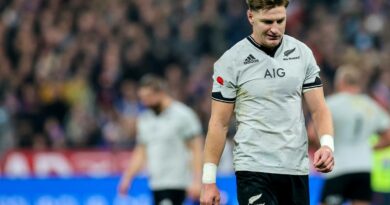 Gregor Paul: The alarming problem with painful All Blacks loss

Bamboozled Blues call for clarity on holding the ball rule