NRL legend Gorden Tallis has brutally condemned Broncos star Darius Boyd for suggesting he would rather quit the sport than move away from Queensland for four months.

For the 2020 premiership to recommence on May 28th, the NRL requires clubs from outside New South Wales to reside in Sydney. On Saturday, it was revealed the Warriors had been granted permission from the New Zealand Government to travel to Australia. If the NRL premiership gets underway as planned in late May, the squad would most likely be away from friends and family for several months.

However, players from other clubs are less willing to make such a sacrifice. NRL veteran Boyd – who is set to retire at the end of the year – boldly claimed there is “no chance in hell” he would consider relocating to Sydney for the sport.

“No chance in hell I could do four months away from my family, and that’s something I wouldn’t be OK with,” Boyd told the Seven Network on Wednesday.

“The game of rugby league is very important to a lot of people, (but) at the end of the day, your mental health and wellbeing is a lot more important.”

Darius Boyd has played 321 NRL games since his debut in 2006.Source:News Corp Australia

Storm star Cameron Smith also declared it would be “extremely difficult” for him not to see his family for that duration.

Speaking to Triple M, Tallis directed a blunt tirade at Boyd, arguing NRL players should be thankful they still have jobs amid the coronavirus epidemic.

“I want to call B.S. on players and clubs at the moment,” Tallis said on Sunday.

“Whether it’s the Queensland clubs or Darius Boyd saying they don’t want to leave home … they’re lucky to do the job that they’re doing, they go out there and play rugby league.

“That’s a privilege, I believe.

“I drove past the local Centrelink, and the line was about 300 metres of people that have lost their jobs. These guys have got an opportunity to go and earn money, and they’re saying that they don’t want to do it?

“It’s a bit of a kick in the belly for all Australians.”

Although the wellbeing of players from Queensland, Victoria and New Zealand clubs would undeniably be impacted, Tallis argued their situation would be “a lot worse” without paychecks.

But New South Wales head coach Brad Fittler pointed out on Saturday money is not a significant concern for the NRL’s veteran players.

“Tours used to be three months long. There’s a lot of young people who play the game that don’t have families who could do it easy,” Fittler said on Freddy & The Eighth.

“On the other hand, there are people like Darius and whether Cameron’s along that mindset, might just say, ‘You know what, I don’t need the money, I’d rather spend time with my family because that might be a bit much for me at this time of my life.’”

Since retiring from the NRL in 2007, Andrew Johns has served as a rugby league commentator.Source:Getty Images

NRL legend Andrew Johns also sympathised with Boyd and Smith, suggesting he’d respond similarly if the predicament arose during the final stage of his career.

“That’s understandable, at this stage of his (Darius Boyd) career,” Johns said on Freddy & The Eighth.

“I even think Cameron Smith's been tossing it up. I can totally understand, late in your career, if it’s your last year, I think I’d do the same as them.

“As everyone knows, I get homesick away from routine and family, so I don’t know if I can go into isolation for six or eight weeks.” 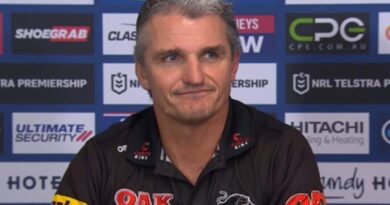