The man who put together the business case for a standalone AFL team in Tasmania says he has not given up hope of a team from the Apple Isle eventually winning a provisional licence to join the AFL despite the financial impact of the coronavirus shutdown.

However he said the bid – which did not argue for a merger or a relocation of an existing team – is not something the AFL should be thinking about right now as they attempt to steer the competition through the coronavirus pandemic and ensure an 18-team competition in its current form remains when matches resume. 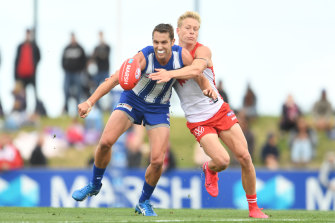 North Melbourne hosted a pre-season match in Hobart this year and have played games in Tasmania since 2012.Credit:Getty Images

However the case for a team in Tasmania was based on an extra team joining the competition rather than reducing the number of teams or instigating a merger.

"Our model was based on a Tasmanian-established club to ensure immediate buy-in from all Tasmanian supporters," Godfrey said.

The discussion led North Melbourne to release a joint statement from chairman Ben Buckley and CEO Ben Amarfio on Thursday which expressed their disappointment at the discussion.

"Now is not the time to be talking about mergers, relocations and vulnerable clubs – we are all at risk and must come together to fight for the existence of our game as we once knew it," Buckley said.

"We also want to highlight our partnership with Tasmania and the great football-loving community there. We have been playing games in Hobart since 2012 and have enjoyed a tremendous relationship with the people, the government and our partners such as Spirit of Tasmania."

North Melbourne have played games in Hobart since 2012 and their deal with the Tasmanian government lasts until the end of 2021.

In February the state opposition in Tasmania argued that the deal with North Melbourne should be used as leverage in negotiations with the AFL for a licence to have a standalone team in Tasmania. 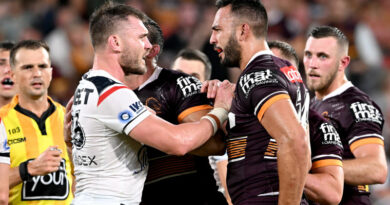 Roosters don’t have a leg to stand on: Ryan James denies dive claims 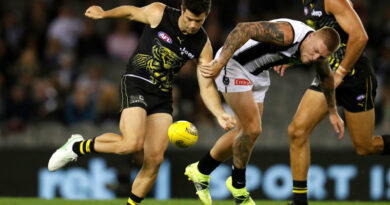