The president of each AFL club will be invited to visit Tasmania in the coming months as part of the bid team’s final push to gain a licence for a standalone team from the state to enter the AFL.

With a decision on whether to admit a standalone team from Tasmania due in August the bid team are moving to quell concerns from club presidents about the viability of a 19th team.

Club chiefs have to vote to approve the admission of a new team however the bid team’s view is that it would be very difficult for the presidents to knock back their entry if the AFL Commission recommended a licence should be granted.

They know though that the league want the admission of a new team to have broad support across the competition to maximise its chances for success.

The AFL have a working party led by Travis Auld and Sam Graham assisting the Tasmanian AFL Licence Taskforce to fine tune the proposal with the two parties meeting on Friday. 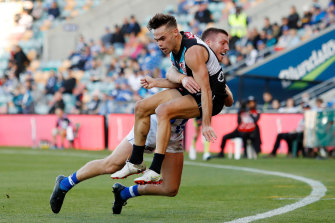 Tasmania have hosted North Melbourne and Hawthorn but will back their own teamCredit:Getty

Taskforce member Grant O’Brien told ABC Radio they were taking a three-pronged approach to ensure the support they needed was in place by August.

“Certainly it is up to them and it’s what they do [but] It would take a substantial number of presidents to knock back a recommendation from the AFL Commission.”

Collingwood president Jeff Browne said in April he was hesitant about committing to another team in the competition until he had seen the detail with Geelong one of the few clubs to declare their support for the new team.

The bid team has started to drill down on how the club will operate in practice including revenue projections with O’Brien revealing discussions even included how often they would get to play the strong Victorian-based clubs such as Collingwood, Carlton, Essendon and Richmond in Tasmania.

Games against those clubs would significantly affect the bottom line and dictate the level of commitment required from the Tasmanian government and the AFL to support a 19th team.

O’Brien said the bid was not predicated on new stadium being built however with a team unlikely to play their first game until 2026 at the earliest if admitted significant progress could be made on that venture.

Last week, the AFL Tasmanian Taskforce launched a campaign called ‘The Last Push To Play On’ to rally locals and ex-pats living on the mainland. 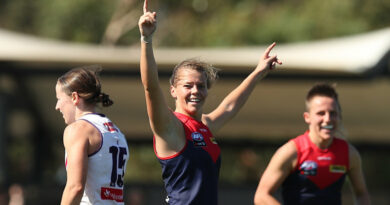 Dees like it hot: Melbourne surge into AFLW preliminary finals