Home » Rugby League » Tears and hugs: Draft mates together through thick and thin

But they'd been planted together at a Geelong Grammar boarding house and had to lean on each other. 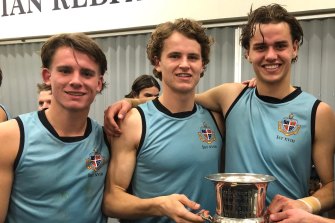 This week, Dow, Kemp and fellow Grammar boarder Caleb Serong are all likely to be drafted to AFL clubs. Serong, from Warragul, and Kemp, who hails from Echuca, should both be snapped up inside the first dozen or so selections.

Midfielder Dow, who is from Swan Hill and the younger brother of Carlton's Paddy, has been tipped as a second-round prospect.

All three arrived at Grammar two years ago because of their respective football exploits.

Dow had known imposing utility Kemp before they began boarding together, but theirs was no close bond.

"We met each other during the under-15s [Bendigo] Pioneers stuff, so it was a while ago. But we actually weren't mates back then," Dow said.

"We'd say 'hi' when we walked past each other but we didn't really have much to do with each other.

"The way he walks around with his chest puffed out, all his tanned skin, he thinks he's pretty good-looking."

And what about Dow might have led Kemp to think he was unusual?

Exciting forward/midfielder Serong says Kemp is expressive and confident. When you are with Kemp it is easier to break the ice with other groups of people.

Dow on the other hand, says Serong, comes across as shy at first but has an endearing dry humour when you get to know him.

Things were tougher initially for Serong than they were for the other two, who had been put in the same boarding house.

"I'm really close to my family and it was tough not knowing many people," Serong says.

Curiously enough, despite Dow and Kemp not clicking initially, it was the fact Kemp chose to take up the scholarship that swayed Dow to head to Grammar as well.

"Knowing that he was going to move as well helped me make my decision. Even though we weren't very close, having that one person to fall back on made it so much easier to make the move," Dow said.

It was a similar story for Kemp.

"When I initially heard about [the offer] I was probably going to say no, because I was just a bit scared, and as a country boy you want to stay in your comfort zone as long as you can," Kemp said.

"But towards the end of it, when the other boys were coming with me, I thought it would be a pretty big opportunity to give up, so I took it and it's been the best thing for me." 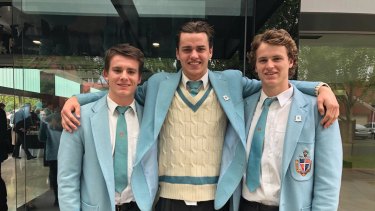 By the middle of this year, Dow, Serong and Kemp had become close.

That came to the fore when Dow went down only two weeks after his virtuoso performance for Vic Country against Western Australia in the under-18 national championships, a showing that included the match-winning goal.

It was early during a school game that Kemp's year was turned upside down.

"I was chasing a loose ball at around 100 per cent. And then the player was coming to front on contact. I went to step left. As I put my right foot out, the knee kind of just went in and went down from there," he recalls.

The initial pain was intense.

"It's like two hands are in your knee, and it just sort of rips it apart. It feels like you've been shot in the knee. It really hurts, it feels like your knee is about to fall off for about the first two minutes, and then it sort of subsides and you think you can go out and play again."

He was helped off the ground, but suspected the worst. Vic Country physio Marty Hogan was on hand and told Kemp about five minutes later that it was probably an ACL.

Dow and Serong were playing too. They knew their mate had been taken off the ground but didn't know the extent of the injury.

But when they headed into the rooms at half-time, they soon realised the news wasn't good.

"He had tears in his eyes and said 'ACL'. Dowy and I just gave him a big hug. It was pretty tough for us to hold back the tears as well," Serong said.

"It was pretty shattering seeing him like that. We gave him a big hug. I nearly felt like crying myself. But it definitely gave us more of a competitive edge going into that next quarter," Dow said.

"But it was only hours later that he was back to his normal sense. He handled it very well. He's been unreal."

Kemp's stoicism inspired the other two.

"For him, the way he's dealt with it, has been unbelievable," Serong said.

"I'm so proud of him. Me and Dowy were a bit down, especially at the start about it, the first week or two. But he came back to school, and on his first day back at school he was in the gym doing some bicep curls and getting around himself. Seeing him so happy and so positive about the whole experience and situation, me and Dowy couldn't really be upset or down, because he wasn't."

Distraught at first, Kemp was soon provided with some comforting words.

"Probably the initial hour after that I was pretty upset. But I spoke to a few recruiters at the game, and they gave me the reassurance that it's not going to affect too much in terms of draft. Which I really appreciated," Kemp said.

He looks at Jake Lever as an example of someone who suffered a knee injury ahead of their draft and bounced back. Kemp is eyeing a return as early as May next year, but knows it depends on how his new AFL club decides to treat the injury, predicting conservatism to prevail in the big league.

Tuttle time again after 600 days out

Perfect Kobe tribute in Lakers miracle
We and our partners use cookies on this site to improve our service, perform analytics, personalize advertising, measure advertising performance, and remember website preferences.Ok