Hame Sele is hoping a $4000 train-and-trial deal with South Sydney can resurrect his NRL career.

Twelve months ago Sele had impressed Panthers officials so much over the summer he locked down a starting spot for the opening-round clash against Parramatta. 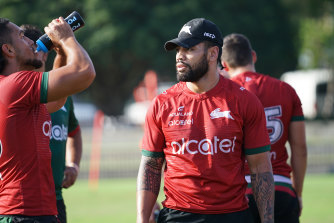 But Sele was restricted to just five games after he was disciplined for being 10 minutes late to a recovery session, then suffered a back injury before finding himself on the NRL scrapheap at just 23 years of age.

After a coffee with Souths coach Wayne Bennett before Christmas, Sele is now two weeks into a month-long arrangement he hopes will lead to a permanent deal. He is not thinking about a plan B.

Souths have two spots left on their 30-man roster with one of those spots needing to be filled by round one. They needs forwards and Dragons junior Sele is a chance while Souths were also keen to see how former Cowboy and Broncos prop Patrick Mogo performed at the Nines. 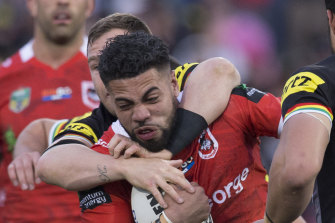 Hame Sele in action for the Dragons.Credit:AAP

Sele, the Tongan whose name he says is often mistaken for being Lebanese, slogged it out in the heat on Friday morning with several Souths stars and is determined to make the most of his late, late lifeline.

"I've got a month to prove myself here," Sele said. "The ball is in my court now, I'm trying to give it all my all at each training session and prove the point I am a first-grade player.

"JD [assistant Jason Demetriou] told me, 'you've got four weeks mate'. He believes in me. And like Wayne said to me, it's about self belief, which is what I've been working on.

"I first met Wayne at the end of November here [at Redfern]. He told me was looking for a forward, but at the time they were sorting out stuff with Latrell [Mitchell] and Jai Arrow."

Sele went without a wage from the start of November and had to draw on his savings and rely on his partner Maria's online business. The couple have two daughters, Valentina and four-month-old Maia.

Sele played 18 games for the Dragons before he had big hopes at Penrith, only to arrive late for a Gold Coast recovery after round five, and failed to return to the top grade.

"I was 10 minutes late and got dropped the following week. A few weeks later I was named to return for Magic Round but I [suffered] from a bulging disc in my back while doing weights. That put me out another two weeks, then I spent the rest of the year playing [Canterbury] Cup."

Bennett is ready to shift Cameron Murray from lock forward, most likely to the left edge formerly occupied by John Sutton. Murray has been training there inside Braidon Burns, placing even more importance on unearthing more middle men.

England vs New Zealand: Richie Myler ‘chomping at the bit’ ahead of Elland Road clash

Latrell Mitchell no longer the only centre of Roosters’ danger