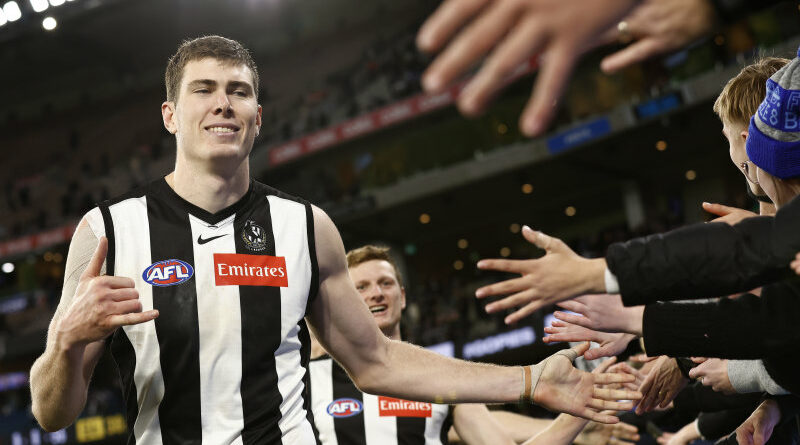 Whatever can be said of Mason Cox and his strange and unique journey from Texas to the Collingwood Football Club, one fact is clear: That he has reserved his premium form for the occasions that match his size.

If the preliminary final of 2018 was the high watermark, as he tore the Tigers apart, Cox also shone in the 2020 elimination final in Perth – another Collingwood odds-against triumph – and a matter of a few weeks ago, he took advantage of a Lilliputian Carlton to haul in several crucial marks and help secure a narrow victory. 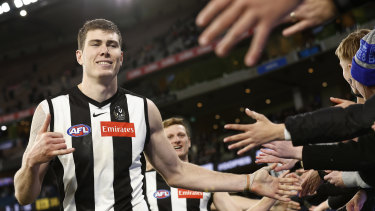 Mason Cox had another standout game on the big stage.Credit:Getty Images

A matter of seven weeks ago, the career of Cox was in intensive care. Not expired, but on a respirator.
The American was dropped for the Anzac Day game, having seemingly set records for dropped marks. His chic prescription sunglasses had not improved his judgement of the ball in flight.

Fortunately for the American, he had an ally in coach Craig McRae – the man who had taught him how to kick when McRae was a development coach at Collingwood. Many would have stamped Cox’s passport at that point, such was the giant’s inconsistency, but McRae kept some measure of faith.

The coach had a plan for Cox, and it was predicated on spending time in the VFL, where the 211-centimetre Texan was played in the ruck, rather than in the goal square.

A seven-foot footballer being played in the ruck – who would have thought?

In this Queen’s Birthday game, which had the atmosphere of a final, Cox again demonstrated his knack for finding the best version of himself in a high stakes game.

The match turned from the mid-point of the third quarter, the Magpies having trailed by the best part of four goals when Darcy Moore’s intercept mark was smothered by a sharp Kosi Pickett. Melbourne’s lead had flattered the premiers, who had been more efficient than the profligate Pies and had been propelled by the sheer brilliance of Clayton Oliver in the midfield.

The lead was misleading, though, given that Max Gawn was hurt, and Steven May and Tom McDonald – pillars at both ends – weren’t playing; this reduced the Demons’ capacity to both defend and score.

From this point, there were many outstanding contributors to the Collingwood cause – Jack Crisp and Jamie Elliott, Brody Mihocek (4.0), wunderkind Nick Daicos, and really most of their defence, which made it awfully hard for the 2021 premiers in the air and especially on the deck.

But the individual story of the match, which enthralled the bulk of the 76,000, belonged to Cox, who took advantage of Melbourne’s indiscriminate bomb entries to take telling marks behind the ball, as if he was a seven-foot Gary Dempsey.

Peak Cox was seen, however, not in his aerial work – which has been vastly improved since he was sent into the ruck – but in two pieces of crucial ground level work in the third quarter.
In the first, he received a handball from Crisp and, with that lumbering gait, booted a critical goal that closed the gap to eight points.

Act two was what Americans call an assist. Cox gathered a ground ball about 20 metres from the Ponsford Stand goal, amid a frenetic scramble, and handballed to an open Elliott, whose conversion reduced the margin to under a kick.

Cox’s size and unconventional skill set also makes for comedic value and at one stage in the last term, as the Demons tired and were no longer able to contain their opponents running game, Cox completed an ungainly, yet effective baulk before hoofing the footy forward.

Cox again was the beneficiary of opposition misfortune, as he had been against the Blues. Gawn’s influence waned in accordance with his injury.

But on this day of reckoning – in which Melbourne’s premiership defence took another hit – it was Cox who landed the heaviest blows when it counted.

His career is out of the sick bay and he will surely be rewarded with a contract. As this Monday demonstrated, Cox might not be a consistent key forward, but he can really mark his mark as a ruckman. 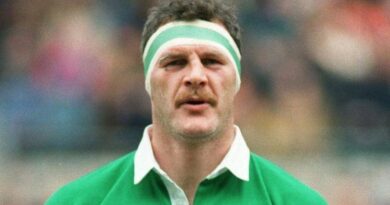