Home » Rugby League » The hard truth behind Gibbs being axed

A lack of body-on-body contact at stoppages and poor defensive running have been the major reasons Bryce Gibbs has been out favour.

Gibbs is likely to remain in the SANFL again this week, as the Crows take on Melbourne in Darwin, having surprisingly spent two of the past three games out of the senior side. 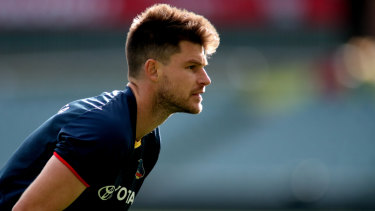 Testing time: Bryce Gibbs has had two spells in the SANFL this season.Credit:AAP

But the Crows are expected to bring back their other out-of-favour regular, Josh Jenkins, who has spent several games in the SANFL this season, as coach Don Pyke takes a firm stance on senior players who don't meet team expectations.

Gibbs has been dropped twice in 2019 – the first time after he had 27 disposals in round three against Geelong, and then was dropped again after Adelaide's one-point loss to Brisbane in round nine, when he picked up 22 possessions and booted two goals, but did not apply enough body on Lions' playmaker Lachie Neale at stoppages or perform the defensive duties expected of him.

Consequently, Gibbs was dropped for last weekend's game against West Coast – another close and painful loss for the Crows.

Gibbs has received some frank feedback from his coach Don Pyke on where he has been falling short and what he needs to do to win back his position, and has maintained what sources suggested was a good attitude to his unexpected omissions from a team that has struggled for consistency this season.

If the lack of body-on-body contact applied was one reason for his omission, the other major factor has been what the coach felt was poor defensive running, or defensive transition work.

Like many highly talented midfielders, this area has been a challenge for Gibbs for much of his career and the Crows were aware it was not his forte when they acquired him in a blockbuster trade from Carlton.

On Tuesday, Gibbs called his conversation with Pyke "confronting" but said he would not "whinge and sook" about the coach's decision to keep him out of the side. 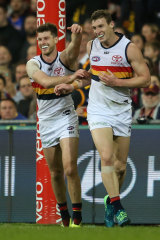 Josh Jenkins (right) has been another high-profile selection casualty.Credit:AAP

"I think it's important to talk through these things and vent a little bit, if you can get a few off your chest," Gibbs told RSN.

"I think it's pretty important to move on quickly and go back [to the SANFL] with the best attitude you can because you're going to be playing with some young guys who are watching what you do and are hanging onto every word you say back there. So it's important to set a good example for them and not be whingeing and sooking too much."

Adelaide gave up picks 10 and 16 for Gibbs, but received an early second round choice back for Gibbs at the end of 2017, in one of three deals that the Crows and Blues completed over the past two trade periods and drafts. The Crows gave up Mitch McGovern to Carlton in a complicated trade that saw the Blues part with picks and the rights to a SANFL player.

But the most contentious deal has been the deal in which the clubs swapped first round picks last November during the draft, with Carlton using an Adelaide pick to draft Liam Stocker.

This trade means, on current ladder positions, the Crows would have pick one in the national draft and Carlton will have Adelaide's pick, currently 12.