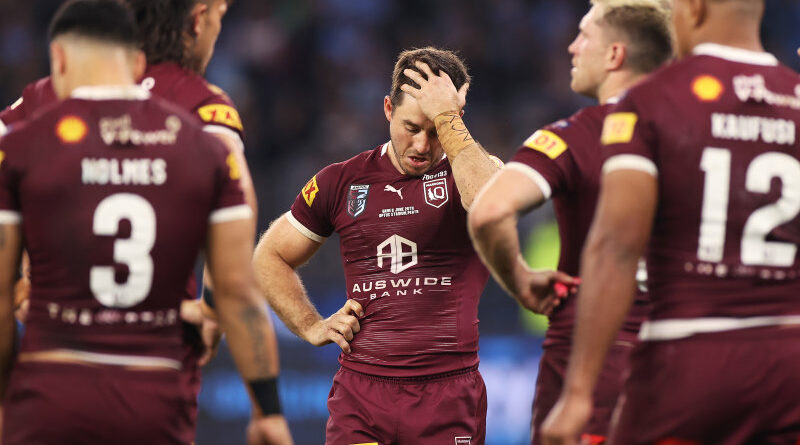 As a player, Billy Slater lived for these sorts of moments. So did his assistant coaches, Cameron Smith and Johnathan Thurston. Backs to the wall, do-or-die, bleed for the jumper; crank the Queensland Spirit ™ up to 11.

When Slater was active, things almost always went according to script. After a while, the fairytale started to become a grim inevitability for NSW. If Slater didn’t put the Blues out of their misery, he need only hope one of Thurston or Smith, or Greg Inglis, or Cooper Cronk, among others, had a decent night at the office.

Now he must hope a new generation of Maroons can find a way to conjure a comeback and lift the shield at Suncorp Stadium when the series heads north for a decider on July 10. A heavy defeat in Perth made for ugly viewing if you weren’t clad in sky blue. Slater’s to-do list just tripled in size.

Much has been made of the value of having the Holy Trio of Slater, Smith and Thurston leading the Maroons. For some of the squad, they are former teammates. To others, they are nothing less than childhood heroes.

That seemed to translate into an ability to go above and beyond in game one, when they found level upon level to steal the march in Sydney and head to Perth with a 1-0 lead. In the west, it looked more like the V’landysball romps of 2021 as NSW scored tries for fun in the second half.

Just like that, the honeymoon was over for Slater, who had been lauded for a fortnight for his tactical acumen and calm direction. Brad Fittler had made key changes, to devastating effect, while Queensland held on for dear life before tumbling off the edge. 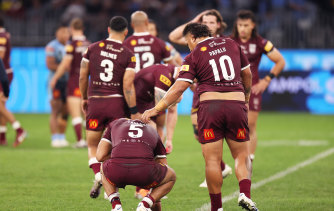 A dejected Selwyn Cobbo is comforted by Queensland teammate Josh Papalii. Both men need to lift dramatically for game three.Credit:Getty

Slater is smart enough to know that a return to Queensland’s famous stronghold at Suncorp Stadium won’t be enough to undo the damage wrought on his side in Perth. He has questions to confront and tweaks to make if they are to rise again in this series.

It all begins through the middle of the field and on that front, the Blues put Queensland on the canvas. Maroon stalwart Josh Papalii, who has been in damaging form for the Raiders, has managed just 72 metres across 47 minutes in two games. Slater simply must get more from the Canberra prop or make the difficult call to look elsewhere.

Maybe a firebrand like Thomas Flegler or Jaydn Su’A could be of use to help get Queensland over the advantage line. Without the energy and leg speed of Reuben Cotter, they looked like they were running through Flanders mud as the Blues skipped across a good three at Rosehill.

Should Cotter miss out with his hamstring injury, Patrick Carrigan must be given the start. He was the best Queensland forward again and the only one to break the 100m barrier with the ball. He needs some friends in the trenches.

More pressing for Slater is how to counter the new threat of Matt Burton, who was a game-changer for the Blues. Even when they had a rare bad set, his soaring kicks put them on the front foot and caused a cavalcade of errors for the Queensland wingers.

It’s plausible to put more pressure on Cleary when he kicks one pass off the ruck but getting to Burton, who brings far more than just a thunderous boot, presents more of a challenge. Latrell Mitchell and Jack Wighton will be available, but Burton has proved indispensable after just one match.

If Queensland can’t cut down their basic errors and missed tackles, some of which were pedestrian efforts more at home in Under-8s than Origin, they stand no chance. It’s up to Slater to convince them it was just a bad night, not a bad omen.

James Graham: My rugby league future still up in the air