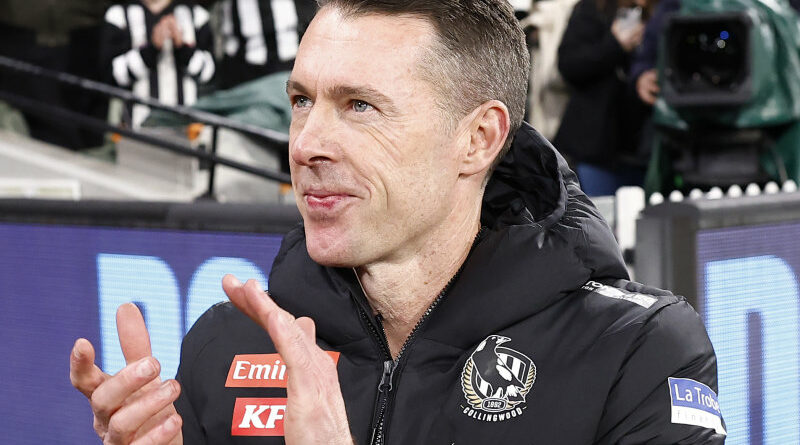 Coach of the year favourite Craig McCrae says after 11 wins in a row, Collingwood are still to discover their upper limit, and he wants Jordan DeGoey to be there as they go in search in the years to come.

“We don’t know where our ceiling’s at,” McCrae said after yet another nail-biting come-from-behind win, this over reigning premiers Melbourne in an MCG blockbuster. “That’s exciting. We’re in a discovery mode. We’re finding out where we’re at. That’s an exciting place to live.”

McCrae cited Beau McCreery and four-goal fourth gamer Ash Johnson as examples. “Beau comes in at half-time. He hasn’t had a touch,” he said. “In the last quarter, the last five minutes, he had more pressure points than half our team. And he kicked a goal.

But it would not have been possible without the excellence of DeGoey, who is out of contract at season’s end and the subject of much speculation.

“He’s a free agent. It’s his right to explore his options,” McCrae said. “Speaking authentically, I’d love Jordy to stay. That’s going to create a headline. Nights like tonight are a good example of his assets. He makes us better.

“It was his best game for the year. I thought he was a star. We couldn’t get the ball out of centre bounces. We got smashed in there again. He just shrugged his shoulders and swagger to get out of traffic.”

McCrae said he was pleased that Collingwood were able to vary their gameplan when Melbourne kept cutting them off at the pass in the first half, and with his team’s composure in the last quarter.

“This group’s got some belief, hasn’t it?” he asked rhetorically. “We just get ourselves into positions where at three-quarter time, there are some smiles on a few faces. It was here we go again. It’s just been our story.”

But he urged realism. “We can’t get too far ahead of ourselves. If you look at the stats sheet, there’s a lot of red in it,” he said. “We’re not naive, we’ve got a lot of work to do. I think we’ll just live in the moment for now.

McCrae admitted Melbourne wingman Ed Landgon’s mid-week critique that the Magpies were “a one-trick pony” and “all duck, no dinner” had been highlighted before the game, but he made light of it.

“I was having a bit of fun myself, because I’m a bit of a one-trick pony before the game,” he said. “I really like personality in the game. I’d encourage more of it. Speak up. We’re craving that, aren’t we? You guys are loving it, and so you should. Let’s embrace this.”

Melbourne coach Simon Goodwin said Langdon had not meant to be provocative. “Ed’s one of the more respectful people that I know. He would have meant no disrespect for Collingwood at all,” he said.

“I think what he was trying to say is they’ve got an enormous strength in how they play. They play fast, direct footy, they transition from the back half well, they use the corridor well.

“Our challenge was to try and take that away. Ed got his words wrong. He put his hand up for that.”

Goodwin said the loss, which jeopardises the Demons’ final four spot, was disappointing. “If you’re a supporter, if you’re a player, if you’re a coach, you’re pretty filthy on that,” he said.

“For a large part of the game, we were able to dominate. We left the door ajar, and like the good team that they are, they walked through it. To be the team we want to be, you can’t do that. When you’ve got a team on the ropes, you’ve got to finish them off.

“The positives are that we are putting ourselves in some really dominant positions. It’s up to us. There’s still a great opportunity that sits in front of us. But we’ve got to start doing it now. We’ve got to convert a bit better and that scoreboard would be a bit different.”

Pies back AFLW coach for 2021, Cats go internal for head of women’s footy

Paisami back for date with Brumbies