Josh Kennedy stutters. Ben Brown raises the ball in front of his face like the Lion King presenting his cub to the world, goes back as far as a fast bowler and runs dead straight at the goals. A rule was relaxed to allow for Lance Franklin’s “natural arc”. Jack Riewoldt needs to line up the goals with his left eye. And Steve Johnson pioneered the “Stevie J”, the set shot kicked around his body now practised by footballers from the AFL to under 12s.

Football coaches, like cricket coaches, try to teach players to perform a classic technique. Ironically few of the best, or most accurate, goalkickers in the game have techniques that resemble one another. They find their own way.

Respected veteran assistant coach David Wheadon’s illuminating book The Art of Goalkicking shines a light on the dark art of the players who can consistently do what so few others can – kick accurately for goal.

Here’s how they do it.

Brown’s routine takes him back further from the mark than any player. Recently, he has struggled for goals, primarily because he has struggled to get his hands on the ball, but he remains one of the most accurate kicks for goal in the AFL.

Interestingly, he is the nephew of James Manson, the former Collingwood premiership ruckman and forward who had an oft-criticised style – a double-handed ball drop. Manson, despite this idiosyncrasy, was one of the most effective goal kickers of his period.

A superstitious player, Brown told Wheadon he has to be the last to run out of the rooms before a game. He has such confidence in his technique he is surprised if a kick misses. 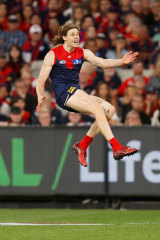 Ben Brown has to follow through in line with a set shot.Credit:Getty

First, he goes back a very long way. He does not step out a precise distance, but far enough to give himself time and space to find a rhythm. At the top of the mark he raises the ball up two-handed in front of his face, to visualise the flight path.

He looks to the ground. He looks up again and refocuses on a person in the crowd. He jogs until he finds a rhythm, relaxes and feels comfortable.

He kicks and importantly, like a bowler, he follows through in a straight line to keep his momentum in the kick going straight. He concentrates on being straight in everything he does: run up, kick and follow through.

He is still learning about his technique with little things creeping in, like his toe pointing outwards instead of straight ahead.

He ensures his body stays vertical, and he doesn’t lean back to check the result too early.

At training, Brown has 30-40 minutes of goalkicking practice each session from different angles and has to kick three consecutive goals before leaving the track. He likes to play mind games with himself, imagining that this will be the winning shot. It works.

Johnson knew the hail of abuse he would cop if it didn’t work. Show pony. Lair.

But he did it anyway.

It takes a certain mindset to do something radical knowing the flak you will get but being so utterly convinced of yourself that you do it anyway. Johnson made it work and changed football.

He was the first to take a set shot for goal and choose to stand sideways and kick a snap across his body. Now everyone does it.

Steve Johnson takes a snap from a set shot against the Pies.Credit:Channel 10

Previously players had played on, run around and kicked a snap. Johnson didn’t do that. He stood deliberately at the mark, turned sideways and without running – and giving the opposition a chance to close down his space and hurry him into changing the position of the ball in his hands – he kicked a snap.

“I knew going into the game I was going to do it if there was a set shot. At the time you knew you open yourself up to criticism. I knew I would be accused of lairising and being self-indulgent but for me, it was the percentage play, I knew it would give me the best chance to kick it,” Johnson told The Age.

“Everyone knows I was a risk-taker with ball in hand. I wasn’t afraid to take a kick through the middle of the ground and if I missed it, it didn’t mean I would go into my shell. I would probably say to myself if I missed that I am not going to miss two in a row. I had that type of mindset, so it didn’t really weigh on me.

“[Mark] ‘Bomber’ [Thompson] was coach. I kicked one from the right foot pocket against Carlton at Etihad when I was 30-35 out and not too long after I got one on the other side and I kicked one on the left foot and there was a fair bit of publicity about it post-game.”

Historian Malcolm Gladwell once did a podcast on the great basketballer Wilt Chamberlain.

Chamberlain was a brilliant player but a terrible scorer of free throws. In despair Chamberlain began throwing underarm, or bucket shots.

His conversion went through the roof, he was demonstrably a better player doing the unconventional or unpopular under arm throw. Yet, he gave it away and went back to throwing regular overhead shots and his conversion once more plummeted.

Chamberlain, Gladwell said, couldn’t deal with the stigma, the teasing of throwing like a child with his “nanna throws”, so he stopped doing it. He would rather be a worse player than a teased one.

For Johnson, the difference was this type of shot had no stigma. It was, in fact, a bit cool and inventive.

“I continued to do it and some of my teammates became good at executing the same kick, then it became really popular.

“It’s like Adam Scott goes away from a normal putter to the broomstick and opens himself up to criticism. But he knows if he is going to take 10 putts he will hit seven with the broomstick instead of six with the putter.”

The West Coast champion, like Brown, has a unique style. Kennedy stutters, jerks and twitches in his run-up but at the point of contact he is perfectly calm, in line and knows the exact point he wants to direct the ball to.

Kennedy focuses on the smallest possible target behind the goals. First, he might find a letter on a sign. Then he looks even tighter and aims for just the corner of a letter in the background.

Josh Kennedy has a stutter-step run-up.

He told Wheadon he focuses on his right index fingertip to ensure the ball is in line with the target. He forgets about the possibility of missing and concentrates on his technique.

He measures a spot six metres back from the person on the mark and knows that is exactly where he is going to make contact.

He waits 6-10 seconds at the top of his run-up and dislikes letting the ball go from his hands. He takes 20 paces, beginning with four walking steps before increasing speed, then stutters until he feels ready, then jogs, concentrating on being balanced in the last three steps. He emphasises being straight, especially the momentum at contact.

Darling has a simple but effective technique.

“Initially, I take a few deep breaths making sure I am in line with the goals. I always start on the left leg. At the start I walk four steps, then jog six or seven until I feel balanced. I just guess the distance from the man on the mark,” he told Wheadon.

“I look at the goals, then the ground during the run-up and finally the seam on the ball at contact.” 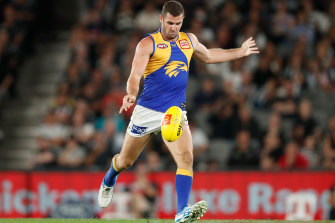 Luke Breust is one of most accurate kicks for goal in the AFL. He knows his technique – or techniques, for he alters it depending on where he is – so intimately it is metronomic.

The former Hawthorn assistant David Rath worked out that Breust’s optimal kick and distance from goal for accuracy and shape on the ball was 48 metres, with the player on the mark about 40m from goal.

So Breust aims to kick this 48m shot even when he kicks from closer to goal.

His routine takes 10-12 seconds. He thinks players looking at the clock to maximise the 30 seconds they are allowed to take a shot may distract them.

At the top of his mark he finds a target in the first few rows behind the goals.

He puts his head down, spins the ball three times for feel then does three arm extensions to loosen up. Then he looks back at his target.

The number of steps he takes depends on how he feels, but he is wary of getting too close to the mark.

He usually sees his foot make contact with the ball.

He holds the ball with his right hand low and closer to the front of the ball than his left.

If he is further from goal he tips the ball back a little to expose the fat part of the ball to make for a bigger contact area, so the ball goes further.

If he’s closer, he holds the ball more upright to get more spin and so it holds its line.

At training, Breust does two 15-20 minute goalkicking sessions a week, aiming to drop the ball in a wheelie bin from 48 s away. He “constantly” practices dribble kicks.

The Tigers champion discovered on a clay-shooting trip in Texas that despite being a right-footer and a right-hander, his left eye is dominant. He had been aiming at clay targets and always missing, then switched eyes and found he was far more accurate.

Jack Riewoldt lines up the target with his left eye, even for his right-foot kick.

How this translates to footy is that for a standard set shot he uses his dominant left eye to line up the ball’s laces with the middle of the goals.

For drop punt set shots he likes the trajectory to be high with the plenty of spin because this will help the ball keep its line.

He tries to keep a low ball drop, bending at the hips with his torso over the ball. He once practised this low body position with assistant coach Mark Williams by imagining he was standing at one end of a small pool table and bending forward to put the ball in the far right pocket.

The Art of Goalkicking by David Wheadon is published by Hardie Grant and available in book stores.

The hard truth behind Gibbs being axed