Home » Rugby League » ‘The ultimate measure of a player’: True toll of a State of Origin outing

“A little bit of a sleep in the sheds after the game,” was how Beau Scott described it.

“Good to lay down,” was his fuss-free summation of collapsing from exhaustion and dehydration at Suncorp Stadium after one of the most famed Origin matches in history. Blues medical staff were ready to send him to hospital.

With Cooper Cronk suffering a broken arm and Billy Slater a busted shoulder, Smith limped out against the Cowboys three days later and made another 56 tackles. Through more than 500 combined NRL, Queensland and Australian appearances, veteran figures at the Storm still rate it as one of Smith’s more remarkable performances.

Origin has long been the game’s pinnacle and one of Australian sport’s most physically demanding occasions. The advent of GPS tracking has seen that ‘intensity’ quantified in recent years, albeit in somewhat rubbery fashion, as the average metres a player runs per minute.

On that measure, Origin outputs have been as much as 25 per cent higher than in regular NRL games. 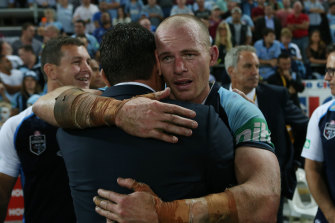 Brutal: Beau Scott is almost out on his feet after NSW’s win in Origin I at Suncorp Stadium in 2014.Credit:NRL Photos

When the NRL moved to shoot down the Blues’ angst over the officiating of the ruck in game one, head office pointed out 59 extra play-the-balls – almost 10 extra sets of six – came in Queensland’s upset win than your average NRL game this year.

The ball was in play for 62 of the 80 minutes, again an extra seven minutes of game time on the 55 minutes averaged each weekend. The six-again’s introduction has hit Origin like a tin of Thai Red Bull.

“Freddy [Brad Fittler] was only saying the other day, ‘My God, these players are so much better than we were’,” Blues high-performance manager Hayden Knowles says. “That was in a physical way and [referencing] how much work and training they have to do.

“You can’t do the brutal stuff which used to happen, but in other ways it’s gone to new levels every year.” 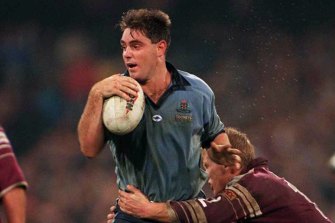 Brad Fittler can only marvel at the physical shift of Origin since his playing days.Credit:NRL Imagery

Players getting bigger and faster year-on-year, and the collisions that generate similar G-Force to car crashes, lead to scenes like Scott’s sudden collapse in the bowels of Suncorp Stadium.

“Players come off at half-time and they’re on the floor, they’re exhausted,” says veteran NSW doctor Nathan Gibbs, having split his 21 years on Blues staff between Fittler’s heyday in the 90s and then the past decade.

“Invariably the coaches are telling them, ‘The guys in the other dressing room are the same’. Breaking it down to a micro level, the beauty and brutality of Origin comes in those post-contact metres. One player hitting it up, fighting to get one extra metre forward and get a quick play-the-ball against two, three and four players fighting for the exact opposite.

“That’s one little moment in the game, then repeat it over and over until one error breaks something open. All that effort, all that force in the collision and it’s done at a speed you don’t see anywhere else.”

Throughout his own Origin career, former Blues assistant turned Sharks coach Craig Fitzgibbon was renowned for more gut-busting efforts than most – making all six tackles in one Origin set in 2004, and a then-record 59 tackles the following year.

Beyond the obvious fitness required, “a player’s mind and heart” will push them into rarefied air, he says.

But as Gibbs points out, the effort a player puts in will be the same win or lose, leading to “absolute exhilaration if you win and utter depression if you lose, on top of absolute exhaustion.”

Which is why the mental toll of an Origin campaign can linger long after the physical has lapsed. 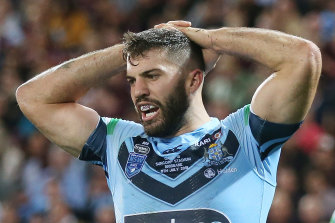 State of Origin takes even the game’s elite athletes like James Tedesco to rare places.Credit:Getty

“Everyone handles that differently,” Fitzgibbon says. “As a coach, Origin makes your player better when they return to your club. But you do have to pay tax on it.”

Having had nine Broncos involved in the 2006 Origin series, when captain Darren Lockyer was among those playing for their rep careers, Wayne Bennett gave his squad a week off, half the side heading to Phuket for a holiday.

Short term, it didn’t work – Brisbane lost five straight either side of their break. Further down the road, they won the premiership.

“Some players, you do have to hold them back for their own good. Then other times, you see an absolute champion take that on board and play some of their better games of their career. With all aspects of it, physical, mental, emotional, it’s just the ultimate measure of a player.” 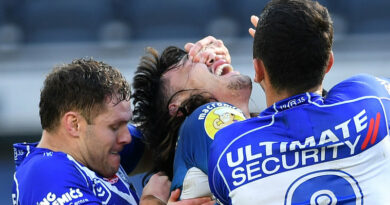