Home » Rugby League » ‘The way he plays is very dangerous’: Swans fans swooning over ‘The Chad’

There’s been a quiet buzz building around Chad Warner for a few months now, but it finally hit Swans co-captain Luke Parker at an open training session at the SCG a few days ago.

Opportunities for AFL players and fans to mix have been unfortunately rare since the onset of the pandemic, which began only a few months after Sydney drafted Warner with pick 39 at the 2019 draft.

Usually in these scenarios, the red and white faithful make a beeline for a certain superstar, who may or may not be coming off contract. But times change, and new heroes – like “The Chad” – emerge quickly.

“We had an open training session during school holidays, and it was probably the first time we had kids and fans and all that, yelling out ‘Chad!’ 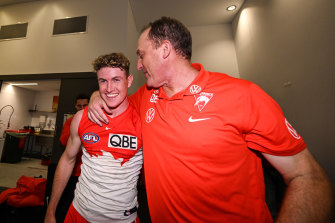 Warner hasn’t exactly been hanging back in the shadows: the blond-tipped 21-year-old has found himself at the centre of some truly big moments this year, and seemingly has a knack for the spotlight.

He set up Lance Franklin’s 1000th goal (then found himself squeezed outside the SCG with Ollie Florent). In round 11, he celebrated a nail biting win over Richmond by booting the ball into the crowd on the siren – and a mini-scandal captivated the AFL fishbowl in the days afterwards amid fervent debate over whether Warner, who gave away a free kick moments prior, should have pinged for a 50-metre penalty.

Before, between and since, Warner has been consistently in the grills of opposition players, getting under their skins, winning the ball, exploding away from contests, setting up goals and kicking them himself. Each week, as the love for him grows from the grandstands, so too does the realisation that Sydney have pulled off yet another steal from the draft.

Warner’s finest performance yet came on Saturday night, as Sydney claimed another top-four scalp with a 17-point win over Fremantle. He was everywhere, picking up a game-high 35 touches (15 contested) for 800 metres gained, seven clearances, six inside 50s, two goals assists and 1.1 off his own boot.

Coach John Longmire has been trying to keep a lid on the hype around Warner, but said more about him than he likely will in any press conference with a big, warm embrace in the Optus Stadium rooms that night.

Parker, who has a front-row seat to watch Warner blossoming in Sydney’s midfield, often has to remind himself that he’s still only 21.

“He’s good fun around the club, Chad. He’s one of those guys that whatever he does, he’s doing it at a million miles an hour,” Parker said of Warner, who stayed behind in his native Perth on Sunday to spend time with friends and family as the rest of the Swans flew home.

“His sheer power around the contest and his speed, his ability to come out the front of stoppages, is probably quite rare in players. You see just how damaging he is when he does get the ball and his ability to either win his one-on-ones or fend off and get away from his opponent.

“And then his delivery going forward … he’s got high score involvements, he’s kicking goals now, always having a lot of inside 50s. The way he plays is very dangerous. Him just doing the basics, his natural ability shines from there.

“He’s been in some incredible form and, [against Fremantle], he was super impressive. Sometimes you forget it’s only his third year, but the numbers he’s putting up, the role he’s playing – he’s super crucial to our team and our success this year.”

That win over Freo now opens up some tantalising possibilities for the Swans, who would have left themselves vulnerable at the bottom of the eight had the lost. Instead, a top-four finish looks well within reach, with games against Adelaide (home), GWS (home), North Melbourne (away), Collingwood (home) and St Kilda (away) to come.

“We’ve had good wins during the year and the very next week we’ve been absolutely slaughtered. The main thing is to just keep pushing those basics and reminding ourselves of what makes us a good team and not get carried away with that,” Parker said.

“We want to take confidence from the games, we understand why we’ve been winning those games. But you always get reminded that football can be very humbling at times as well and put you right back in your place when you think you’re on a roll. For our whole group in general, it’s keeping that front of mind.”

The stat that explains Freddy’s gamble on young gun Haas