The euphoria of Lance Franklin’s 1000th goal may have subsided but the Sydney Swans are determined to keep riding the ‘Buddy bounce’ and continue their unbeaten start to the AFL season on Thursday.

A short six-day turnaround into their clash against the Western Bulldogs at Marvel Stadium would have felt even shorter for Swans players, many of whom experienced the best night of their lives – let alone their fledgling AFL careers – last week when Franklin broke through the four-figure barrier. 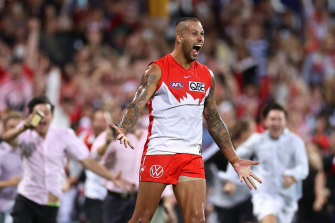 Lance Franklin’s 1000th goal will be remembered for a long, long time.Credit:Getty Images

While the team has moved on from Franklin’s milestone – and drew a line underneath it after being invited by coach John Longmire to share their stories from the incredible pitch invasion at the SCG – the positive emotional energy is still running through some players, and assistant Dean Cox believes that feeling can be appropriately harnessed.

“After the game, it was a really good opportunity in the change rooms to have families and football department staff together to acknowledge an amazing achievement, and part of it was to put to bed a little bit then,” Cox said.

“But all players, especially young players, standing alongside Lance will always be in awe and amazed at what he can do and amazed they can play alongside him. I don’t think that will ever change.

“The start of the year’s been really important as well as Lance obviously achieving what he did. We try to keep the group as accountable as possible and the players are really good at doing that and they’re really focused on what they’ve got to do.

A closer inspection of Sydney’s 30-point win over the Cats, which came after an impressive first-up derby triumph against GWS, suggests that there isn’t much wrong with the footy the Swans have been playing – particularly in midfield as a young group featuring the likes of Isaac Heeney, Ollie Florent, James Rowbottom and others have taken a big step forward and removed some of the pressure off the old guard.

“What we were able to do around the ball, that probably works into this week when you’ve got, for the last four or five years, one of the best contested ball midfield groups that can get some forward-half footy, purely from dominating that area,” Cox said. “It’s a great opportunity for our young guys to have a crack at them.”

Franklin will back up despite the six-day break, with the Swans making only one change to their 22, bringing in forward/ruck Joel Amartey for Logan McDonald.

As for Heeney, who kicked five goals that were entirely overshadowed by Franklin’s bag of four to bring up his historic milestone, Cox said he wasn’t surprised with his early output.

Heeney, 25, is coming into his prime as a footballer and spending more time in midfield but has still found the energy to contribute in attack, with his eight goals across the first two rounds putting him top of the Coleman Medal leaderboard.

“It’s come off him being able to have a full pre-season. He’s had some set-backs, certainly since I’ve been here, and for someone who works so hard, to be able to get an opportunity to put that into practice on the training track all pre-season, he’s got a really good blend of being able to win his own ball and also aerially, he’s a really strong focal point for us.

“He compliments the guys well at the minute, and we expect Isaac to continue to do the same and build on what he’s done in the first couple of rounds.” 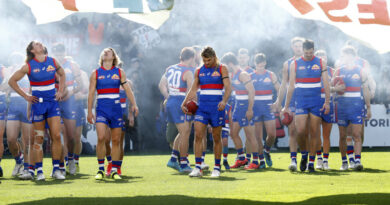 The tragedy behind the Bulldogs’ traumatic week