Home » Rugby League » Thinking Cleary: How Panthers star dealt with pressure and rose above the hate 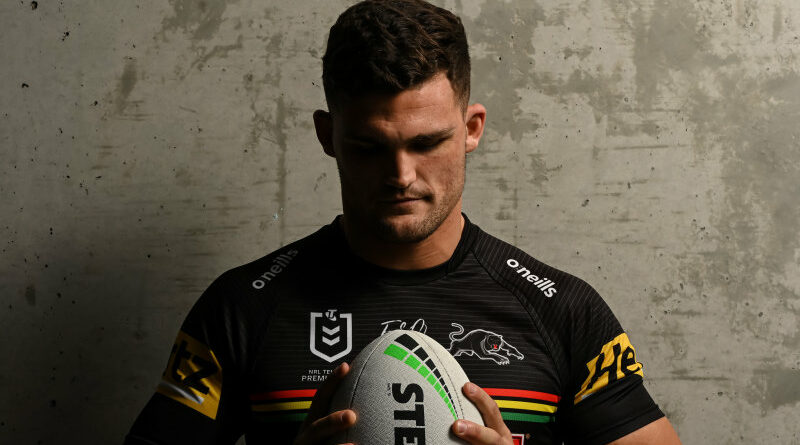 The burden on Nathan Cleary’s shoulders, one of which is hanging by a sinew, comes in many forms.

There’s the pressure of being the coach’s son, of wearing the No.7 jersey, of being the eighth most Googled athlete in Australia and also knowing you’ll be the punching bag when almost impossibly high expectations – whether they be his own or other people’s – aren’t met.

“He handles it by being really well prepared, willing to take a knock and being in the moment,” his NSW coach, Brad Fittler, says.

Fittler’s most trusted advisor, Panthers legend and board member Greg Alexander, has followed Cleary’s career closer than most. Whether it be Cleary’s debut as a teenager, his progression into the cauldron that is State of Origin or preparations for a second consecutive grand final, “Brandy” can’t recall ever seeing Cleary flustered.

“No, I don’t think I have,” Alexander says. “What stood out for me immediately back in 2016 when he first came into first grade, it’s hard to describe, it’s almost something that emanates from someone. You can see it in them, the way they hold themselves, the way they talk.

“And then you watch them play and it’s confirmed, that’s what I thought. That was Nathan as an 18-year-old in 2016; he gave me the impression he is unflappable.” 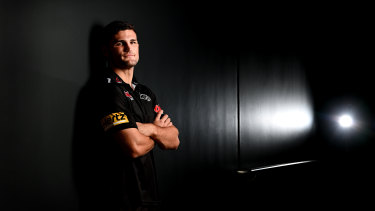 Nathan Cleary says he was riddled with doubt due to social media trolls.Credit:Getty

Beneath that calm demeanour, however, Cleary has gone through periods of crippling self-doubt. The final game of his debut season was a finals loss to Canberra. On the bus ride home, he turned on his phone and began scrolling through the messages sent to his social media accounts. Not all of the criticism was constructive. Like the aggrieved fan who demanded Cleary front up at Penrith train station so that he and his mates could take out their frustrations on him personally.

The hate kept coming, particularly around Origin time. Even when NSW were winning, the performances of the halfback weren’t to everyone’s satisfaction. The critiques flooded social media and Cleary made the mistake of reading it all. When, by his own admission, his form at the start of the 2019 season was poor, the noise became deafening.

“It took over my mental state and was affecting the way I was playing,” Cleary told the Get the Edge podcast, hosted by Panthers and Blues physical performance manager Hayden Knowles, earlier this year.

“The most frustrating thing was that I was reading all of this stuff and it was paralysing me.

“It affected the way I played, which affected the team, which hurt me the most. I wasn’t in the right state to perform well. That was something I had to learn.

“We had a chat about it. First I had to acknowledge that I probably had performance anxiety from reading all of this stuff and putting extra pressure on myself.

“Footy is a tough enough game as it is and if you’re putting more unneeded pressure from what people on Twitter [are saying] or messaging you on Instagram, it makes it so much harder.”

The diagnosis was FOPO: fear of other people’s opinions.

Here was a young superstar, who had three generations of first-grade footballers in his family to lean on for advice in father Ivan, uncles Jason Death and Josh Stuart, and grandfather John Stuart.

‘He is arguably the most influential player in the game, now that Cameron Smith has left.’

Instead, he was listening to the keyboard warriors, many of whom threw stones in anonymity.

Sensing Cleary was spiralling, uncle Josh – a former North Sydney Bears prop – recommended he turn his attention to something worth reading, Can’t Hurt Me, the memoir of former American Navy SEAL David Goggins. Stuart felt the struggles overcome by Goggins – the book’s tagline is “Master your mind and defy the odds” – would resonate with his nephew.

Around the same time, Stuart asked Alexander to have a “quiet word” to his nephew.

“There was a time, and Nathan spoke about it publicly, when he was struggling with social media,” Alexander recalls.

“It’s easy for us to say not to look at it, but their lives are like that. During Origin, the phones in team meetings, team rooms and on the bus are off limits because you need to talk and get to know each other. But their phones are in their rooms waiting for them. It’s something you need to learn if you’re the No.1 hit – it comes a bit thicker and faster than others.” 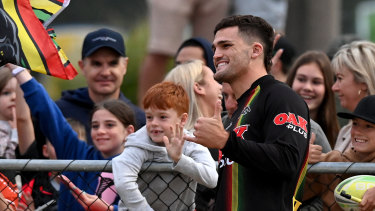 Nathan Cleary relaxes with the fans on the Sunshine Coast during the lead-up to the grand final.Credit:Getty

Cleary has taken the tip. He has shut out the noise and narrowed his focus to become one of the NRL’s most consistent performers under pressure.

It is not any easy thing to do given his profile. Myprotein conducted research in September that found Cleary’s name was Googled by Australians an average of 33,100 times a month, more often than cricketer David Warner, UFC star Robert Whittaker or golfer Adam Scott.

“Not that he would know,” Stuart says. “Nothing gets to him unless you’re bagging him on the golf course.”

There will, however, be another acid test on Sunday. The NRL grand final is the one arena in which Cleary is yet to make his mark. In order for Penrith to win, he has to do so.

When it comes to the Super Bowl, the NFL’s biggest day, the quarterback determines the result. On Sunday, Cleary is the quarterback. As Alexander notes, a team such as the Storm can still win big games without their halfback firing. That’s because if Jahrome Hughes is injured or goes missing, coach Craig Bellamy still has Cameron Munster, Brandon Smith, Harry Grant, Nicho Hynes, Ryan Papenhuyzen or Josh Addo-Carr to step up and take control.

Shut down, Cleary, however, and the Panthers are cooked.

“There’s no doubt about that,” Alexander says. “If you asked 10 commentators who can’t Melbourne do without, you might get six different answers. I don’t think you do that with Penrith. What he does in the team can’t be replicated.”

To underscore just how vital he is to the Panthers’ chances against South Sydney, consider this compliment, paid to him by another grand final-winning halfback, Peter Sterling. 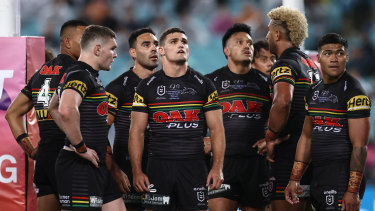 Nathan Cleary and the Panthers watch on as the grand final slips away in 2020.Credit:Getty

“The consistency of excellence in his game is why he is arguably the most influential player in the game, now that Cameron Smith has left,” Sterling says.

“It comes with the number. Having the seven on the back, you’ve got to take a lot of ownership of the performance of the team and the result. He does that seamlessly; he isn’t burdened by that at all.

“He is rapidly becoming the complete player.

“When you are put into pressure situations early on, you benefit from that down the track. I thought he handled coming into Origin football and carrying the expectation of his team, as well as at club level, extremely well.

“Now you can see just how much he is blossoming from that. His decision-making is second to none, his game management is wonderful in that he not only understands his own game but the game itself so much better.

“He’s cool under pressure, he’s got the perfect demeanour, his body language is always positive and strong.

“To be speaking in those terms about a guy who is 23, that’s a great sign of what is to come, not just where he is now.”

If Cleary can deliver on Sunday night, maybe, just maybe the haters will find a bit less to hate.