Cronulla caretaker coach Josh Hannay has rubbished suggestions John Morris’ exit will result in the club’s season being written off, declaring: “If anything, it could potentially galvanise this group”.

Hannay will warm the seat until Craig Fitzgibbon arrives in November in what is his second interim head coaching role in as many seasons. The former Maroons three-quarter, who took over at the Cowboys when they parted company with Paul Green, believes the Sharks are in a much better position to make a statement in the competition. 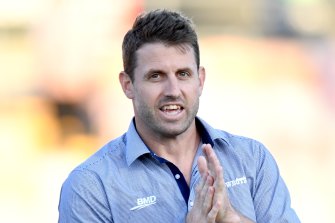 Josh Hannay believes the Sharks will be competitive despite the John Morris dramas.Credit:NRL Photos

“If anything, it could potentially galvanise this group, knowing how they operate.

“I’ll point to the opening five weeks; we’ve dealt with some hardship, playing with 13 players for the majority of the game against Parramatta.

“To a man, people looked at the effort they put in and the resolve they showed that night. That speaks volumes to the character of this group.

“I’ve no doubt this will take time to digest and people will process it in their own individual way. But there is a group here that is resilient and we will kick on and make something of this year. This isn’t a horrible situation to be stepping into.”

Hannay will address the Sharks players, who had their rostered day off on Wednesday, for the first time on Thursday. He said he owed Morris a debt of gratitude for giving him an opportunity.

“He’s been nothing but supportive of me as a coach,” he said. “He’s appreciated me giving him a hand, he’s allowed me to run the defence and really take charge of that.

“It’s been wonderful to have that support. As a man, everyone within the game who knows John Morris knows he is a man of great integrity, is of the highest quality.

“Unfortunately what he is dealing with is part of our industry. It’s a tough and rugged industry at different times.

“One day he will look back on what he’s gone through as an experience that will galvanise him and help him get to where he ultimately wants to get to.”

Hannay said he had ambitions to become a permanent head coach at some point, but for now was focused on handing over to Fitzgibbon a team in good shape.

“I’ve been in the game a little while as an assistant and it’s my second go as an interim coach,” he said.

“I’d like to think I’ve got the ability and capacity to be a head coach one day long term. I certainly am encouraged by the impact I’ve been able to have on this group in such a short space of time.

“I know Craig is coming in and will want to put in his own staff and people around him. I’ll be doing my best to put my case forward to Craig to be part of that staff moving forward.”

The Sharks have 14 players off contract, but Hannay believes no one in the squad requires further motivation to perform.

‘I’d like to think I’ve got the ability and capacity to be a head coach one day long term.’

“Regardless of whether they are contracted or off contract, they are a group that love the contest. They love competing and love what they do,” Hannay said.

“I love that they want to compete, that is part of the DNA of this club. The guys who are contracted will be doing their best and the ones who aren’t will be giving it their best.

“We will continue to get into positions to win games of football and when we do that you have to make sure you go on with the job.

“This group will come together and make the most of the year ahead.

“We have seen enough from this group to suggest there is something to play for this year.”

Fitzgibbon has been a member of NSW mentor Brad Fittler’s coaching staff in recent years, a role he is expected to retain following his Sharks appointment. The position will give him further opportunities to develop relationships with elite players, some of whom he will undoubtedly be keen to recruit.

“We’re really pleased he’s received an opportunity to take the next step in his career.

“Our expectation is that he will be in camp with us for the Origin series this year. We’re looking forward to the benefit of his knowledge and experience to get us a win in the series this year.” 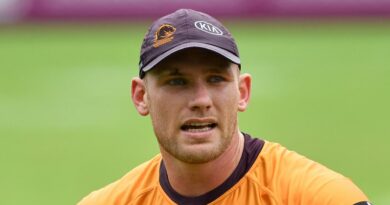 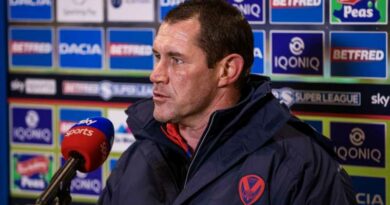