It's difficult to mount an argument that Richmond's 13th premiership – their third in four years – wasn't their hardest-fought to date. After months on the road, myriad off-field dramas and a first-up finals defeat to the Brisbane Lions, the Tigers overcame the early loss of a star player and a 22-point second-quarter deficit to claw their way back against Geelong in the grand final at the Gabba on Saturday night, securing back-to-back premierships for the first time in 46 years.

Yet again it was Dustin Martin who came to the fore when Richmond needed him. The superstar's 21 disposals and four majors were the difference and enhanced his legend. The greatest Tiger of all-time? It increasingly appears the case. 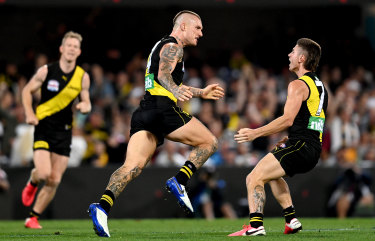 But Martin couldn't have done it alone. Richmond's fightback came on the back of a brilliant second half from Shai Bolton, whose speed and touch torched the Cats. Jayden Short overshadowed better known fellow defenders to rebound brilliantly all night, while Toby Nankervis was outstanding in the ruck.

The Cats looked to have Richmond on the ropes midway through the second term but would be left to rue chances wasted when the game was on their terms.

A fairytale ending for Gary Ablett was denied. Hurt early, he bravely played on but his impact was minimal. For Patrick Dangerfield, his glittering resume still misses a crowning jewel. He was instrumental in the first half, but when the game went on the line, he was shaded by Martin.

The match’s complexion changed dramatically after just six minutes. Richmond’s defensive fulcrum Nick Vlastuin ran smack bang into Dangerfield’s forearm. He was out like a light. In the space of seconds, Ablett’s left shoulder was trapped by a Trent Cotchin tackle. The champion writhed in agony and headed for the rooms. It appeared his last dance might end after only a couple of beats. But the Cats medicos tended to the veteran, and with strapping applied he was back on the ground before the quarter was out. Vlastuin would not be so lucky. Carted off the Gabba, the backman was back on his feet before long but in no state to return.

Then to top off a madcap opening term, play was briefly halted after a couple of ground invaders were brought down and swiftly taken from the field. Where else but Queensland? 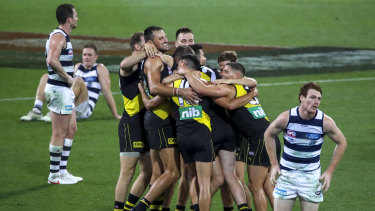 To the victors go the spoils.Credit:Glenn Hunt

After a lengthy delay to clear Vlastuin from the field, it was the Cats who started the better. In greasy conditions they still managed to play their mark-heavy game. However the Cats couldn’t convert early in the piece. Tom Hawkins missed a long set shot, as did Dangerfield who had won a free kick after bringing down Jack Graham. The Tigers needed no further invitations. Dion Prestia snapped the grand final’s first goal after some quick hands inside Richmond’s forward 50. They got the second too when a tidy pass from Martin opened up play for Liam Baker, setting up Kamdyn McIntosh for a long, running major. Richmond’s pace looked like it was troubling the Cats. But Geelong had answers. Cameron Guthrie and Mitch Duncan had both started brightly, and both did what their higher-profile teammates had failed to do earlier in the quarter by drilling set shots.

The Cats had a victory during the quarter-time interval when Jordan Clark won the grand final sprint, and the wins kept coming for Chris Scott’s side after the break. With Tom Stewart controlling play in defence, Geelong dominated much of the second quarter, monstering Richmond territorially and impressing with ferocious attack on the ball. Richmond, sans Vlastuin, looked overawed. Trent Cotchin held Dangerfield in a marking contest, with Dangerfield converting from the ensuing free kick. Noah Balta turned the ball over to Joel Selwood, Sam Menegola in turn kicking his first goal. Then Ablett, the son of “God” resurrected, provided a deft flick to Selwood, who in turn set up a Hawkins set shot from which the Coleman medallist made no mistake.

The margin got out to 22 points, and it could have been even more dire for Richmond, with Gryan Miers spraying a gilt-edged chance and Zach Tuohy missing another. Richmond needed something quickly. Tom Lynch dropped a sitter in the pocket but Martin – in typical style – fended off Jake Kolodjashnij to snap truly.

After an extended half-time interval, Richmond picked up where they left off. Now it was the Tigers who were getting repeat forward 50 entries. Jack Riewoldt put through his first and errors started creeping into Geelong’s game. Jason Castagna floated through his first, one Rhys Stanley should have perhaps touched on the line. A nice passage of play from the Cats ended with Miers steadying on the run, but Kane Lambert added another for Richmond. Then Martin slid one through masterfully, putting the Tigers in front for the first time since the opening term. Geelong regained their composure but Ablett was labouring and Richmond were surging. The Tigers headed to the last change two points ahead and made the perfect start to the final term too as Prestia threaded the needle from the pocket.

Then Bolton spotted up Lynch, who finally made his mark after a quiet night. Martin sent one through another one along the ground, and Geelong's back looked to have been broken. Sam Simpson was poleaxed in a collision with teammate Menegola, leading to another long delay as the youngster was carted off. Menegola kicked his second but it was too little, too late, with Riewoldt's second the icing on Richmond's cake and Martin's fourth adding an extra layer. 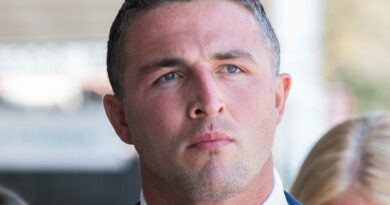 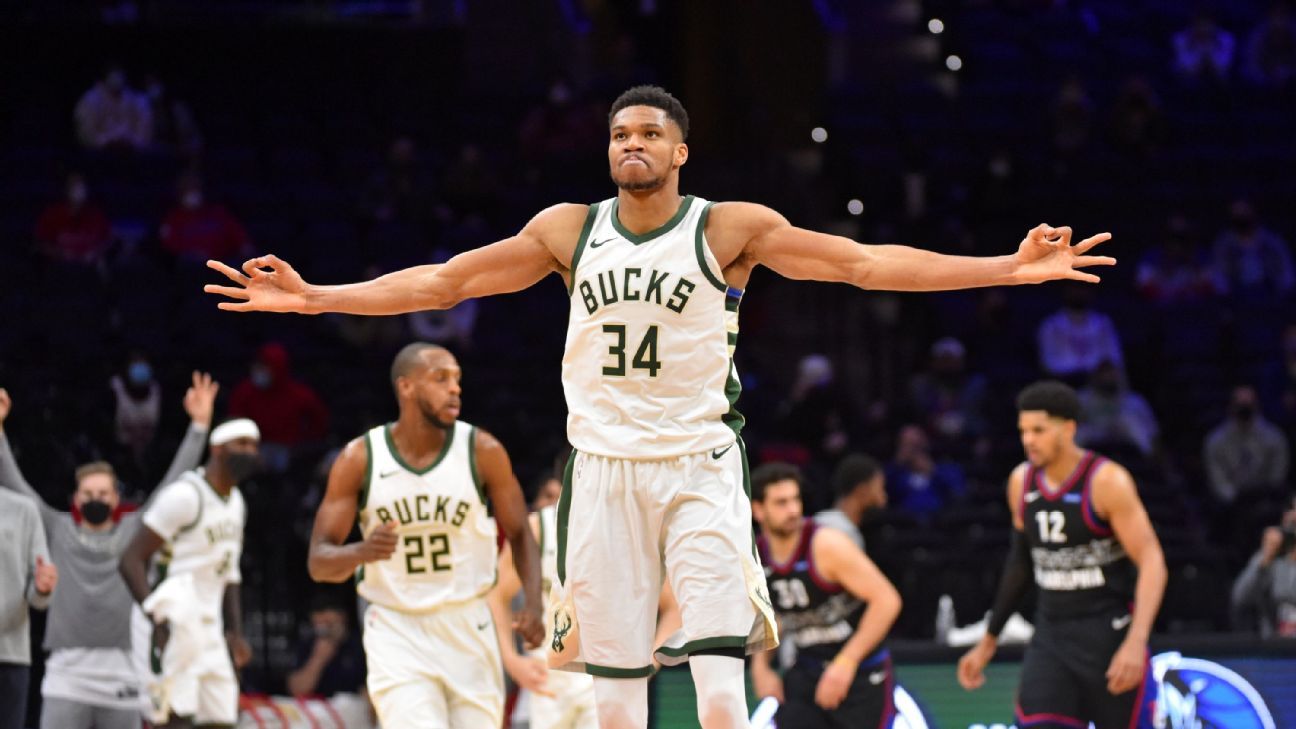 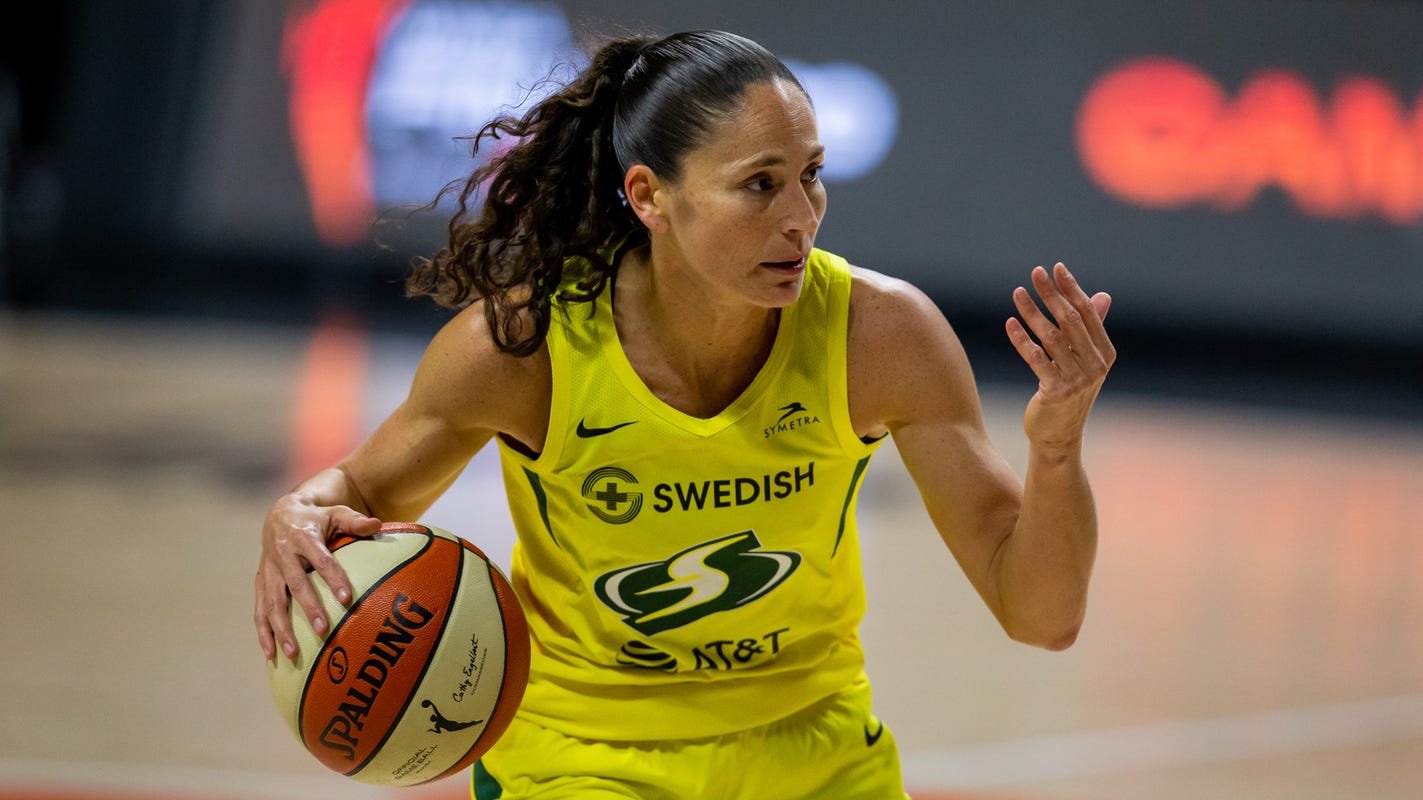