Rugby league icon Benji Marshall has been brutally axed from the Wests Tigers’ team for their round five match against the Canberra Raiders.

As first reported by the Sydney Morning Herald, co-captain Marshall has been relegated to the bench after the Tigers’ shock final-minute loss to the Gold Coast Titans on the weekend.

Former State of Origin star Josh Reynolds will replace the 33-year-old at five eighth and will partner Luke Brooks in the halves on Saturday.

Although Marshall is equal second in Dally M voting after round four, he will put on a No. 18 jersey this weekend.

Amazing that Maguire has dropped Benji Marshall. Reckon his two former clubs would love a halfback of his calibre right now.

“Has been Tigers’ best player for 12 months. One average game and he’s gone. Massive call from Maguire.”

Kayo is your ticket to the 2020 NRL Telstra Premiership. Every game of every round Live & On-Demand with no-ad breaks during play. New to Kayo? Get your 14-day free trial & start streaming instantly >

In total, Tigers coach Michael Maguire dropped five players from the side that faced the Titans in round four. Tommy Talau, Russell Packer, Michael Chee-Kam, Zane Musgrove and Reynolds are the other new faces in the Tigers’ side.

Maguire hinted there would be changes after Sunday’s “unacceptable” loss, in which Marshall kicked a field goal to put the Tigers ahead with three minutes remaining.

“That performance is unacceptable for where we’re at,” Maguire said.

“I’m sick and tired of the ups-and-downs of performance. We need to change that.

“If you can’t be hungry enough to win a game of football then you need to look in the mirror, and those are the sort of things we need to be honest about.

Benji Marshall and Josh Reynolds at a training session.Source:Getty Images

NRL TEAMS FOR ROUND 5: Broncos swing axe after nightmare

Reynolds made seven appearances last season before he became embroiled in a domestic violence charge, which has since been dropped by police.

On Monday, the 31-year-old also made headlines after he recorded a false positive reading during a random alcohol and drugs test. He admitted to driving with an expired license, but a second test showed a negative sample.

After making his NRL debut in 2003, Marshall has played 245 first-grade games for the Tigers, the second-most in the club’s history. The New Zealander has scored 1118 points for the Tigers in 14 seasons, which is comfortably a club record.

Marshall briefly shifted to Super Rugby after he was benched by former coach Mick Potter in 2013.

Having won two of their opening four matches, the Tigers will face the Raiders at Campbelltown Stadium at 7:35pm (AEST) on Saturday.

‘No alternative’: NRL insists referee was right to send off biter 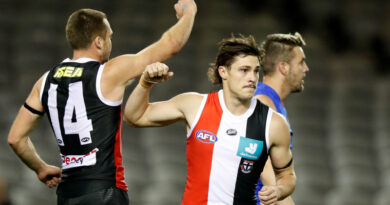 Geary and Steele to co-captain the Saints