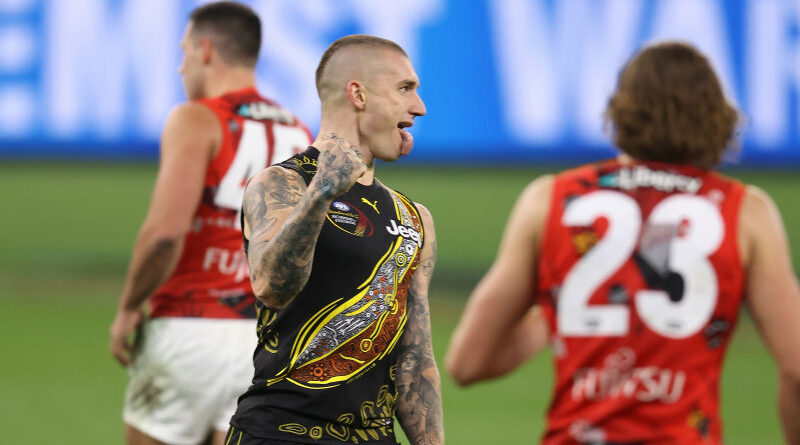 Richmond know all about thriving on the big stage in recent years, and while Saturday night’s Dreamtime clash was not a final, they delivered an important statement in posting a 39-point win over Essendon at Perth’s Optus Stadium.

This clash was shifted to Perth because of Melbourne’s latest lockdown, and the pre-game festivities and lights spectacular at the high-tech new stadium did justice to the marquee clash of the Sir Doug Nicholls round.

It was then over to on-field business, and the Tigers reinforced their aspirations for three flags on the trot and strengthened their hold on a top-eight berth thanks to the fine performances of a brilliant Dustin Martin, the grit of Dion Prestia until he was subbed off in the final term with an injury, the bullocking Jack Graham, the dash of Shai Bolton and Mabior Chol’s athleticism in the ruck. 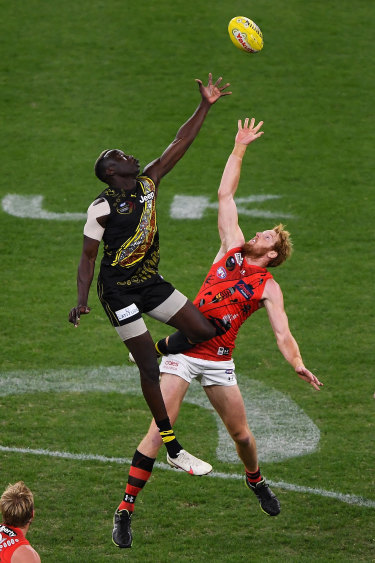 The Tigers have now won successive matches for the first time since round two and 11 straight against the Bombers, erasing any doubts about their premiership credentials in a season where they have struggled to find a groove.

The Bombers were dealt an early blow when star midfielder Andrew McGrath was subbed off with a suspected posterior cruciate ligament injury and finished the night with his leg in a brace. They were left with three on the bench when David Zaharakis (hamstring) was unable to take to the field in the final term. Yet they found a way to mount a comeback, as they did successfully against West Coast last week.

Darcy Parish continued his stunning rise, the Bombers’ midfielder being named best afield for having a club-record 44 disposals (16 contested), breaking Barry Davis’ record of 43 in 1969, and firming in the Brownlow Medal voting.

He was instrumental in the Bombers’ surge when a five-goal deficit in the third tern became a three-point margin in the final term after Cale Hooker booted two goals, one from a free kick off the ball, and Anthony McDonald Tipungwuti – with his first kick of the night – found Kyle Langford, who converted. When Alec Waterman ran into an open goal, the Bombers – having stopped the Tigers’ run – had a three-point lead.

But the Tigers responded as a team which has won three of the past four premierships would be expected to. Bolton delivered two creative goals, while Martin, arguably best afield, provided a steadying long bomb, as the Tigers booted the final seven goals. 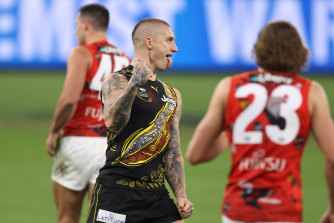 The Tigers needed Chol to take the lead against Andrew Phillips in the ruck in the absence of Toby Nankervis, and he was arguably best afield in the first term, as the Tigers owned the centre corridor. He had four hitouts, three intercept marks and eight disposals, including a well-weighted pass to a leading Martin, who converted. Speaking of Martin, the greasy conditions prompted him to change his boots during the warm-ups, and again early in the first term.

Tiger Josh Caddy was all smiles after he snapped a left-foot goal over his head in the second term, having almost made a mess of the situation after running from the opposite pocket and opting initially to pass. Caddy’s conversion opened up a 27-point lead. The Bombers tightened defensively through the midfield in the second term but couldn’t make the headway they wanted on the scoreboard despite Parish’s brilliance. Match winners against the Eagles last week, Jake Stringer and McDonald-Tipungwuti had only eight combined touches to the main break.

There was more confusion about the holding-the-ball interpretation in the third term when Jake Aarts was tackled in the Tigers’ forward pocket by Jordan Ridley, the Tiger clearly not releasing the ball legally. Martin was so convinced a free kick was to be paid that he didn’t pick up the loose ball. Play, however, was allowed to go on, baffling everyone. There was questionable call in the Bombers’ forward line soon after, prompting Seven commentator Luke Darcy to declare: “That rule, incorrect disposal, has gone out tonight.” 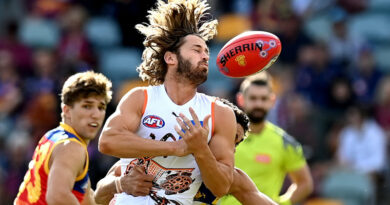