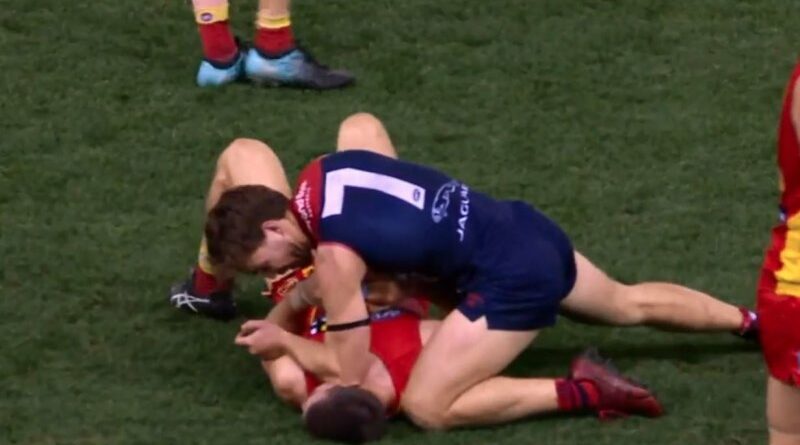 Melbourne favourite son Jack Viney has been sent straight to the AFL tribunal, charged with serious misconduct for an incident in which he appears to push his elbow into the jaw or neck of Gold Coast opponent Sam Collins. 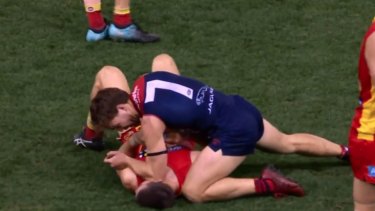 Jack Viney has been charged for this incident against the Gold Coast Suns’ Sam Collins.Credit:Fox Footy

Viney was referred to the tribunal, which means he cannot accept an early plea, following the Demons’ 98-point thrashing of the Suns on Sunday.

The incident happened during the last quarter of the match, which was relocated to Marvel Stadium from the Gold Coast because of the snap lockdown in Queensland.

“Based on the available evidence, the incident was assessed as serious misconduct,” the AFL’s match review statement said.

Footage emerged of Viney pressing his elbow into the throat area of Suns defender Collins during a wrestle and he now appears to be in real danger of missing Monday’s blockbuster against the West Coast Eagles at Optus Stadium.

Viney picked up 22 possessions in the clash – his 11th game so far in 2021. He sustained a stress reaction in his left big toe back in round six.

Earlier this season, Melbourne coach Simon Goodwin spoke of the former skipper’s importance to the side.

“He is someone that we need in our team,” Goodwin said.

“He brings a certain element and stiffness to our team in the way we play. I am looking forward to getting him back.”

Viney was suspended for two games in 2014 after the tribunal found him guilty of rough conduct in what was described as a landmark hearing.

In that situation, Adelaide tall forward Tom Lynch was left with a broken jaw after Viney was found to have bumped when he had other options in a three-way collision that also involved former Demon Alex Georgiou.

The AFL appeals board later cleared Viney and overturned the contentious suspension, but Melbourne said it still supported the AFL’s new version of the bump rule.

The appeals board took only 14 minutes to overturn the ban after hearing that he hadn’t bumped Lynch, but had instead “braced” himself for contact.

Also announced on Monday night, Port Adelaide’s Willem Drew was charged with rough conduct after a dangerous tackle on GWS opponent Lachie Whitfield during the opening term of their round 20 clash at Marvel Stadium on Sunday.

The incident was assessed as careless conduct, low impact, and high contact. It was classified as a $3000 fine as a first offence and he can accept a $2000 sanction with an early plea.

Giant Xavier O’Halloran has also been charged with rough conduct for another dangerous tackle on Xavier Duursma from Port Adelaide during the third quarter. With an early plea, he can also accept a $2000 fine.

The incident was also graded as careless conduct, low impact, and high contact. 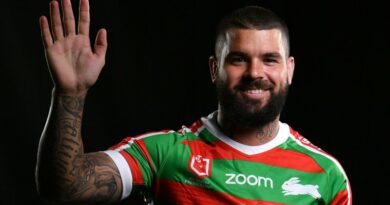 Souths offered Reynolds a two-year deal with an option, but it wasn’t enough 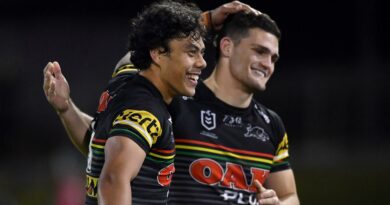 95m in 12 secs: U18 Blues winger scores with incredible show of pace