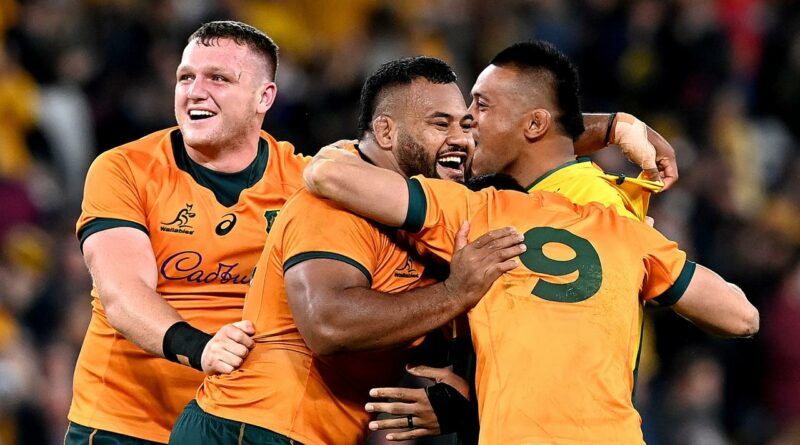 A shambolic and undisciplined Wallabies have conjured a miraculous 23-21 win against France after Les Bleus literally threw away the match with the win in the bag.

Leading by a single point with the time up, the French simply had to put the ball into touch from a lineout but threw a wild pass, with Tate McDermott winning possession.

Scrappy for most of the match, the Wallabies finally managed to hold on to the ball for multiple phases and won an 83rd-minute penalty which fly half Noah Lolesio converted for the win in front of 17,821 fans at Suncorp Stadium.

The severely weakened French side looked to have won their first Test in Australia for 31 years after a rusty performance from the Wallabies, who seemed determined to kick away possession and squander their chances.

The side France brought to Australia was missing the bulk of its best side with the French Top 14 final finishing less than two weeks ago meaning players wouldn’t have had enough time to quarantine.

It was a hell of an effort from the French.Source:Getty Images

Down by eight with 10 minutes remaining, the Wallabies seemed destined to lose the series opener but the game turned in the final quarter after Dave Rennie made key replacements, including injecting scrum half Tate McDermott into the match.

McDermott’s crisp service and link with Queensland Reds teammates Harry Wilson and Taniela Tupou – who also played a key role after his injection in the final 30 minutes – lifted the tempo but the Wallabies’ errors continued to cruel their chances.

They clawed their way back into the match when Michael Hooper scored in the 70th minute but continued to take poor options and make coach-killing errors.

The night was summed up in the 77th minute when, trailing by two points, centre Hunter Paisami took the lowest percentage option, attempting to find debutant Andrew Kellaway on the flank with a crosskick that sailed into touch despite having runners lined up on his outside.

Unforced errors cost the Wallabies dearly in the opening stages, with winger Gabin Villiere notching a double inside 20 minutes as Australia struggled in almost every facet of the game.

Australia were smiling but it wasn’t pretty.Source:Getty Images

From failure to put relieving penalties into touch, turnovers in set play, forward passes and missed tackles, the Wallabies handed Les Blues chances on a platter and the underdog visitors gladly accepted.

Villiere scored the opening try of the match after just five minutes following a Wallabies scrum turnover deep inside their own half.

The home side looked to have responded just minutes later when Hunter Paisami scurried over but the pass from scrum half Jake Gordon was ruled forward and when Noah Lolesio spilt a high ball, the French again made hay, with Villiere running through a gaping hole in the defensive line after accepting a simple inside ball.

The Wallabies hit back with a try to hooker Brandon Paenga-Amosa from a rolling maul just after the half-hour mark and while Lolesio converted and then guided a penalty through the sticks, the Wallabies botched a late chance to score and went to halftime trailing 15-10.

The pain continued in the second half, with Louis Carbonel slotting a penalty to extend their lead to eight and the Wallabies botching their best chance to score, when Tom Wright failed to ground a Paisami kick that bobbled up in the in-goal.

France blew it rather than Australia winning it.Source:Getty Images

It may have been the Wallabies’ first international showing of the year but it was the French who had every reason to show signs of rust.

In hotel quarantine until Tuesday, the French flew to Brisbane just over 24 hours before the match and had far from the perfect preparation. But they were by far the better side in the first half.

It was not necessarily the flashy football the mercurial French are known for but their fundamentals were at least sound, in marked contrast to the Wallabies.

How AFL quarantine hubs could work 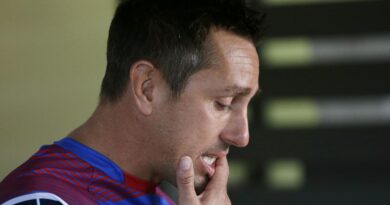