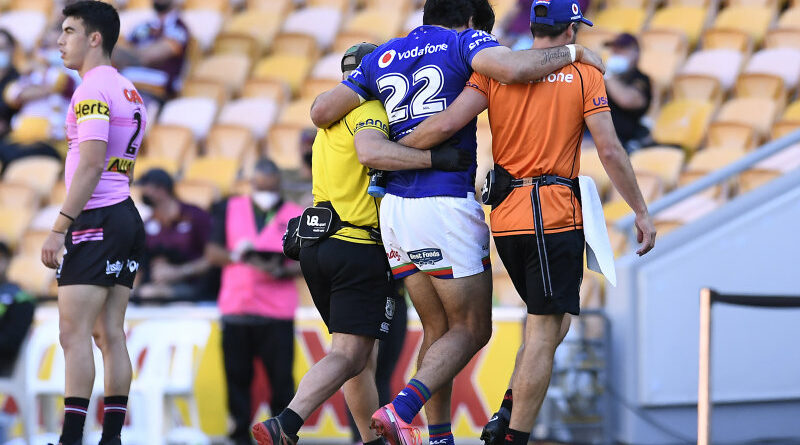 The Warriors have avoided a thrashing from Penrith after a four-man injury blow saw the New Zealand side reduced to just 13 fit players.

Coach Nathan Brown will be left to pick up the pieces after his team came away with a 30-16 loss despite having no bench players for the entire second half.

Emblematic of the Warriors’ luck of late, the Kiwis led 10-4 after 20 minutes but came undone due to a four-pronged first-half injury hit.

The Warriors were helped along by another underwhelming performance by Penrith halfback Tyrone May, who once again failed to deliver in place of an injured Nathan Cleary at No.7.

The first injury for the Warriors came in the 11th minute, with Tohu Harris taken off the field following an injury to his right knee.

Minutes later, Roger Tuivasa-Sheck underwent a HIA after catching the hip of Matt Burton. The Warriors captain hit the ground with his eyes already closed and remained on the turf for a number of minutes while being attended by club doctors. Unsurprisingly, he did not return to the field. 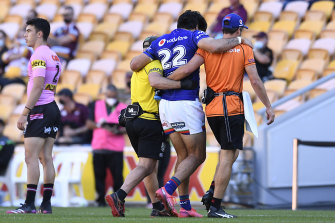 Tohu Harris was the first to fall in a major injury toll for the Warriors on Sunday afternoon. Credit:Getty

Next, Wayde Egan was taken off for a shoulder injury in the 16th minute before Rocco Berry suffered a hamstring complaint minutes before the break.

Despite their depleted bench, the Warriors were unable to activate their 18th man, as none of the injuries came as a result of foul play.

The lack of players saw Jazz Tevaga remain on the field despite himself carrying an injury.

The situation became so desperate Addin Fonua-Blake begged referee Chris Butler to put in a good word with the bunker during a captain’s challenge in the second half.

“Can you tell them upstairs that we’ve got no one on the bench. Give us a call,” he joked.

Panthers star Viliame Kikau scored in the first minute before tries from Warriors duo Egan and Berry handed the Warriors a six-point lead after a quarter of the match.

Despite having their backs to the wall, the Warriors only trailed 16-10 at half-time. But the Panthers clicked in the second half to prove how ruthless they can be, putting three tries to secure the two points.

But before time could be called, Reece Walsh once again proved his resilience, scoring in the 72nd minute in one for the highlights reel.

Prior to the game-day challenges, the Warriors were also faced with some major adjustments less than 24 hours before kick-off after Euan Aitken was cleared from 14 days in isolation.

His promotion to centre triggered a mass 11th-hour reshuffle, pushing Marcelo Montoya to the wing and captain Tuivasa-Sheck to five-eighth in a new-look halves pairing with Chad Townsend.

Latrell’s future looks elsewhere. But his Roosters’ teammates would love him to stay