Essendon have unveiled a five-year blueprint, outlining their intention to finally bury the ghosts of the supplements saga by delivering a breakthrough premiership and boosting membership to 125,000.

Declaring they “exist to win premierships”, the Bombers presented the plan to members at Wednesday night’s annual general meeting, where president Paul Brasher and director Melissa Green were re-elected. 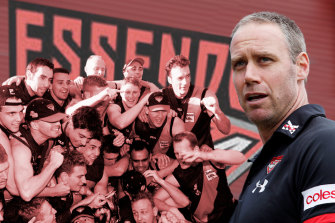 Essendon coach Ben Rutten, and the 2000 premiership team. The Bombers have released a five-year blueprint for success.Credit:Getty Images, The Age

Ahead of their 150th year celebrations, the Bombers have declared they want to win a flag in each of the AFL, AFLW (they will join in late 2022), VFL, VFLW and VWFL (wheelchair) programs by the end of 2026, and add considerably to their commercial base with a shrewd independent investments portfolio, while strengthening their supporter base. They had 81,662 members this year, behind only West Coast, Richmond and Collingwood.

They celebrated the last of their 16 VFL/AFL premierships in 2000, and are mired in their longest run without a flag since claiming their first VFL premiership in 1897.

But with belief and optimism rising after returning to the finals this year under new coach Ben Rutten, chief executive Xavier Campbell said there was no reason not to believe a flag was within sight.

“Absolutely, as we are being very specific about that. When will we win a premiership? I am not sure, but we believe we can win at least one premiership in the next five-year period,” Campbell told The Age.

“It’s beholden on us now to drive the club forward … hopefully, we are starting to build some momentum now.”

“I don’t know if it’s next year, but I know in this next period, if we as a group continue to build upon the foundations that we have got, the connection continues to build, the players continue to believe and they enjoy their football, [then] I think anything is possible. And we don’t put a ceiling on that.”

The blueprint comes a decade after the 2011-12 pre-season when the Bombers put in place a supplements and injecting program that, come February 2013, was officially under investigation by the Australians Sports Anti-Doping Authority.

The saga ripped the club apart, terminated premiership aspirations, ended friendships, sparked health issues for James Hird and Mark Thompson and led to the Court of Arbitration for Sport finding 34 past and present players guilty of taking banned substance Thymosin Beta-4 and suspending them for the 2016 season.

The Bombers have spent the ensuing years regaining the respect of their supporters and the league as a whole. They have also rebuilt a playing list that now oozes young talent.

“It’s not that we weren’t focused on winning premierships. Clearly, the underlying positions in all of our discussions, the commonality came back to that we want to win a premiership. That’s a given, but maybe there is a more intricate focus now,” said Campbell, who was elevated to CEO in 2014.

“Perhaps there are less of the other discussions and challenges than we have had in the past but, by no means, is that an excuse either. It’s beholden on us now to drive the club forward … hopefully, we are starting to build some momentum now.”

The document, presented to club staff last week, states: “Our purpose – we exist to win premierships.”

Campbell said the Bombers “want to be more bold” about their finals intentions, and said Rutten was doing an outstanding job. 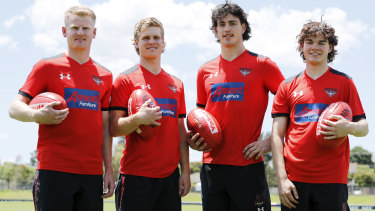 “He has really got an eye for detail, and he cares, and it means an enormous amount. I am not saying that in comparison to others, necessarily. As a stand-alone observation that is what I would say,” he said.

In terms of the club as a whole, Campbell added: “I can see the connection that is not just being built with the players but the staff as well.”

The Bombers have also outlined, by 2026, plans to be a national leader in “Indigenous community advancement” on and off field, have their headquarters at the Hangar, which also provides opportunities for other sports and businesses, finished, and complete the redevelopment of Windy Hill, ensuring a precinct for women’s, state, and community league football.

They also intend to be the No.1 commercial club, based on attendance, broadcast, digital and social media and apparel sales, and lead the league in revenue in areas such as sponsorship, membership, corporate networks, philanthropy, and retail sales.

Campbell said the Bombers had a “really talented, compelling and influential, high net worth supporter base” and the club would continue to tap into this.