Home » Rugby League » ‘We have to use that identity’: Why Maguire wants to raise the Tigers’ bar

Michael Maguire sat down after the Tigers lost a must-win showdown with Cronulla in the final round of last season in what appeared to be a reflective mood.

Just minutes after the Tigers had been eliminated from finals contention for the eighth straight season – ending Robbie Farah's illustrious career – Maguire wasn't scathing in his assessment of his players or the officials, as you might expect. 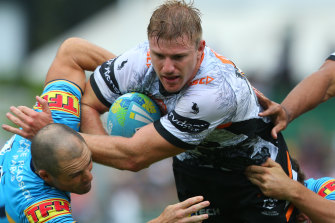 Luke Garner scores for the Tigers against the Titans at the NRL Nines in Perth on Saturday.Credit:Getty

"It wasn’t so much just about the last game, it was about the expectations across the season.

"Those are the things I was alluding to around growing an organisation. It’s the everyday stuff. It’s as simple as turning up on time, knowing what’s required, knowing your role, doing your job. They’re the cliches that coaches throw out there, but it’s about understanding what the level and standard of what that expectation is."

Identifying the need to raise the bar and heighten expectations is one thing. Actually changing the culture of a club that has struggled for an identity since the 2005 premiership is another.

"The club itself – when the two organisations came together – 2005 gave it a real identity," Maguire said. "We have to use that identity. There were a lot of young kids that watched the game and they became Benji Marshall fans, Brett Hodgson fans, Robbie Farah fans, there were a lot of young men and women who jumped on board at that time.

"There’s been a following there. It’s just been dormant for a while.

"We need to revitalise that and I think we actually saw it in that last game. The players themselves are really passionate about putting ourselves into that arena because it’s good fun. There is nothing better than being there."

Maguire hopes the drive he is now seeing in his players will lead to breaking the finals drought this year. But as he said after the devastating final round loss of 2019, the Tigers are no longer here to simply scrape into finals.

Maguire and the rest of the club want to win a grand final.

"I feel at the moment we’ve got not only the hierarchy but everyone – everyone around the club is aspiring to be the best in all areas," he said. "Whether it’s marketing department, membership, we need more members, we want to bring the members on the journey.

"And when the outside world can see that we’re in a strong position moving forward, everyone will get behind that.

"A lot of the things I was alluding to around that was exactly that – standards and expectations amongst us as a club and myself as a coach. From what I’ve seen as a coach, you need all of that to drive your standards.

"I wouldn't say it’s potential, either. It’s there. I think it’s there already."

Greene steps out of the naughty corner and back into spotlight