Timana Tahu believes it is incumbent on governments to provide even stronger laws against racial abuse on social media, admitting it will be almost impossible to eradicate altogether.

The former Australian and NSW representative made the impassioned plea on the eve of the NRL’s Indigenous Round, which will celebrate First Nations people and raise further awareness about bridging health and employment gaps with non-Indigenous Australians. 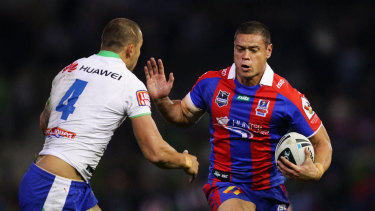 “At the end of the day everyone is human. To have the NRL show that awareness on a national stage and world stage, they can play a big part by educating the fan base they have.”

All 16 NRL clubs will wear Indigenous-themed jerseys for the round, which has turned into one of the highlights of the rugby league calendar. The Broncos will host the Storm in the first match at Suncorp Stadium on Thursday night.

The NRL also use the week to promote its School To Work scheme, which aims to recruit Year 11 Indigenous students and ensure they finish high school before finding placement in the workforce or tertiary education.

‘A lot of young kids think their way out is football, but it’s more than that.’

“These kids are not just athletes, they’re academics as well,” Tahu said. “We get to showcase our athletes in the NRL, but there’s also a place for academics.

“You always need your top players promoting awareness of education and health. I did it when I was playing at the top of my game.

“A lot of young kids think their way out is football, but it’s more than that. You have to be educated, you have to work after football and there are some boys that work after hours during their footy career. Having someone like Latrell, he’s such an inspiration and good role medal for Indigenous communities.

“Indigenous players celebrate their culture week in week out when they run out. They represent their families, their people and the game in the most professional manner. From where Indigenous Round started until now, it’s been a massive improvement.”

Matthews’ ‘gut feeling’: Members may turn on Pies board over Eddie’s exit