Home » Rugby League » ‘We’ll give you the $10m, that’s no problem’: The lunch where Packer saved Panthers

When Don Feltis sat down for lunch with James Packer and Phil Gould eight years ago, the long-time Panthers official had already been deeply involved with the Penrith club for more than half a century.

So far back does Feltis go with league in Sydney’s outer west that on a Saturday morning in 1954, as a player with the old Penrith Waratahs, he and his teammates helped dig the foundations for what became their first licensed club with a pick and a shovel. 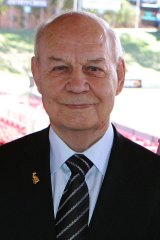 Few know the Panthers' story over the decades as intimately, through triumph and tragedy and everything in between.

Having been on the inside few, too, know just how important that lunch with Packer in 2012 was for Penrith and their future.

It had been set up by Gould, whom chairman Feltis had brought on the previous year as Penrith’s general manager of football, and with the club in urgent need of $10 million.

The reason was that the Panthers’ $100m loan from ING bank had been sold to a New Zealand corporate raider called Torchlight, which had immediately called in the debt.

As a result of some negotiating by then-Panthers CEO Warren Wilson, they weren’t demanding the lot up front but they wanted $10m straight away. While Penrith was rich in assets, with 14 licensed clubs worth more than $200m, they were short on cash and time.

“We’d borrowed $100m off ING … and we were under the impression that all we had to do was pay interest on that,” Feltis said.

“We had ING’s loan down to about $80m and they sold it to Torchlight for, I think, $78m. None of us knew that they could do that. 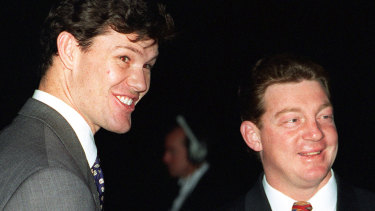 “All of a sudden we had to come up with some money and we just didn’t have any.

“We said to them ‘we want some time to sell some clubs’. We were negotiating to sell the club over at Cabramatta, the Mekong Club … we were talking about $46m. We had plenty of assets, over $200 million in assets, so we didn't have any problem, but we just had to find somebody who wanted to buy a club.

“They said ‘we want $10 million now and we’ll give you enough time to sell the rest of the clubs’. But we didn't have $10 million.”

The urgency of the situation prompted Gould to call his friend Packer for a favour and the trio were soon sitting around a table at a restaurant in Phillip Street discussing Penrith’s predicament.

It was two years before Packer joined Russell Crowe as a co-owner in South Sydney and just as his plans were emerging for a second Sydney casino. Feltis had never before set eyes on the 45-year-old billionaire.

“Just like that. We didn’t have to sign anything. There was no interest or anything. He gave us $10 million and a few months later we gave his $10 million back to him.

Feltis only met Packer on one other occasion, when the mogul was a guest of the club at an opening at the Panthers Rugby League Academy. But the significance of the loan to the prosperity of Penrith is such that he still has a copy of the email Packer sent back after he thanked him for stepping in to help the club out of a very tight spot.

“He only did it because of his friendship with Phil Gould,” he said.

“Him and Phil are pretty close friends. I don’t think James would have given us that money if he hadn't been mates with Phil.”

Looking back, as he declares Ivan Cleary's side "specials" against Melbourne in Sunday's NRL grand final, Feltis is not convinced the financial dilemma the club found itself in was an existential threat. But the Penrith statesman remains indebted to Packer for the part he played.

“I still believe that Panthers would have survived that initial demand for money from that Torchlight mob, we would have got around it because, as I said, we had assets of $200 million," he said.

“I still believe we would have negotiated our way out of problems but because the Packer $10 million was ready and available and fixed the problem there and then, we took advantage of it. You’d be silly not to and we appreciated what he did. He was very happy to do it.”

Broncos snubbed as Queensland Squad announced for State of Origin