Wests Tigers chairman Barry O'Farrell has challenged the NRL to prove that relocation of Sydney clubs is financially viable, criticising head office for re-visiting an issue he says is "as predictable as Easter and Christmas".

As the discourse about NRL expansion has been reignited since NRL chief executive Todd Greenberg appeared on Nine's 100% Footy on Monday the Tigers, Manly and Cronulla have been tossed up as the Sydney clubs considered most likely to be future candidates for relocation. 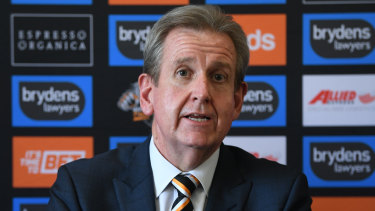 O'Farrell, the former NSW Premier, has only recently joined the Tigers board as chairman but made his position very clear when contacted by the Herald and asked if relocation was a possibility for the club.

"You won't be surprised to hear me say that while I preside over this club, there will be no desire to take part in any form of relocation," O'Farrell said.

"The only move I'm interested in is towards a premiership."

Veteran Tigers playmaker Benji Marshall was similarly defiant when asked if his club could be vulnerable.

"We won’t be relocating," Marshall said. 'We have two of the biggest Sydney clubs in the game and our following is massive.

"I feel like we add a lot to the comp and we have too much of a following within Sydney and outside of Sydney to have to move."

The sentiment within the club's Concord Oval headquarters is that the Balmain-Wests merger ahead of the 2000 season was the club doing its part for the good of the game.

While O'Farrell agrees, he doesn't expect that to carry much weight moving forward.

"I like that sentiment but rugby league is the same as politics in that you can't expect the past to be remembered in the future – it holds little favour," he said.

"We are focused on the fundamentals here. That's all about getting our finances right, growing junior participation and getting back to success on the field.

"Our finances are something we have worked hard on for a number of years and we are getting closer to that on field success as well."

The new Tigers chair believes the NRL and ARL Commission should focus on doing the same.

He challenged the latter body to produce some concrete financial proof that expansion was viable, given the costs associated with the inclusion of Greater Western Sydney and the Gold Coast Suns in the AFL.

"The ARL Commission needs to stop teasing the media and upsetting fans by trotting out this relocation story," he said.

"It's as predictable as Easter and Christmas. If they are serious about relocation, they have to produce some proof and show us where the financial support is going to come from."

Those in favour of expansion would point to the $8 million which was floated as a carrot for clubs considering relocation as proof the governing body have the coffers to support a move.

The Suns and Giants have cost the AFL closer to $200 million.

That is money the NRL does not have, especially given the next broadcast deal is not expected to significantly increase upon the $1.8 billion deal which runs until the end of 2022.

Several club powerbrokers have also pointed out that both the Broncos and Storm have been propped over the years up by significant ownership stakes from News Corp.

O'Farrell pointed to the fact that no club went near the $8 million offer floated years ago as proof the financial windfall would need to be much greater.

"I think if you are a newly married couple that is looking to buy a house you would have some idea of your budget," he said.

"If the NRL and the commission are serious about this they need to show us where the money is going to come from.

"Until then we will just focus on our own financials, growing our membership base and supporting our players."