Home » Rugby League » ‘We’ve got a good relationship with him’: Goodes always welcome at Swans

Adam Goodes remains an important part of the Swans club seven years after being booed out of the AFL, according to current Sydney coach John Longmire.

A smiling and jovial Goodes was among the 2012 premiership players who did a lap of honour during tenth anniversary celebrations at the SCG before last Saturday’s match between the Swans and Gold Coast. 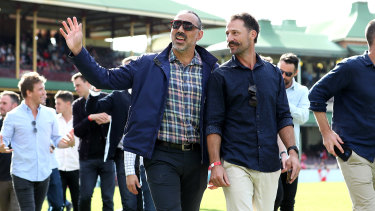 Adam Goodes and Nic Malceski at the SCG on Saturday.Credit:Phil Hillyard

The 2014 Australian of the Year, Goodes has rejected repeated invitations to AFL functions despite being a dual Brownlow Medallist.

“We speak to Adam a fair bit, it was more about from a public perspective coming to the game,” Longmire said on Tuesday. “We’ve got a good relationship with Adam, so it was great to see him at the footy, good to see him with his mates.

“He had a great time with the boys on the weekend which was great to see. We’re really fortunate there’s a lot (of premiership players) still in Sydney, and there’s a lot we haven’t seen for quite a few years. 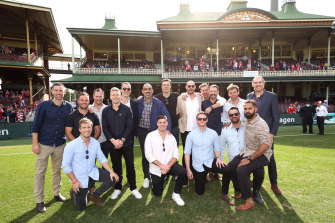 Goodes was among the 2012 Swans premiership players who had a reunion at the SCG on Saturday. Credit:Phil Hillyard

“It was great to catch up, although it would have been good to have a really strong game and finish off on a better note than what we did [losing to the Suns].”

There are likely to be team changes following the upset loss, with Tom Hickey’s rapid return from a knee injury giving the Swans the opportunity of playing two ruckmen to counter Essendon big man Sam Draper.

While the Swans are coming off successive losses, Draper was a driving force in the Bombers’ second win of the season as they charged home with an eight goals to one last quarter against Hawthorn.

“Their midfield got going and Draper in the ruck was super,” Longmire said of Essendon’s victory on Saturday. 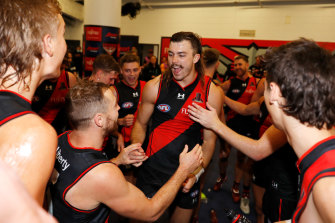 Sam Draper was all smiles as the Bombers celebrated their win.Credit:AFL Photos

The 205cm Draper had a season high nine clearances and 14 hitouts to advantage against the Hawks as the 23-year-old continues to develop into a ruck force. Among ruckmen he is currently equal third overall with total clearances this season and third with hitouts.

While Longmire was noncommittal about whether Hickey would play, he talked up the possibility of him joining his injury replacement, Peter Ladhams, in the side. Ladhams, originally from Port Adelaide, has done a solid job as Hickey’s injury replacement.

“We feel like it’s an area that we can explore with two rucks,” Longmire said. “We’re not sure whether it’ll be this week.

“We believe in coming weeks that we’ll be able to explore that a bit further. And it depends upon the opposition, what we feel like those guys can do when and what the other key forwards are doing in our team as well.

“So there’s a few things in that mix … and there’s a likelihood we’ll be seeing it in coming weeks.” 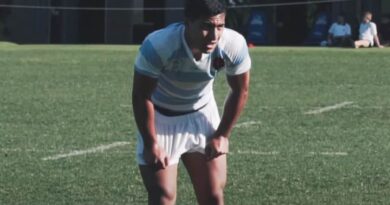 ‘Right to act in self defence’: Asofa-Solomona finds support from judge