Melbourne expected to start slowly. But they didn’t expect this.

The Demons are playing worse than they felt they had a right to expect. That’s a right based on their finals run last year, notwithstanding the belting in Perth that ended those finals. 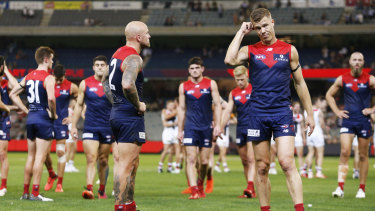 Yes, Steven May and Jake Lever would make a significant difference, but they are not the only side with injuries (St Kilda’s were worse).

The Demons cannot stop teams getting a run on against them. In each game bar one so far this year, teams have kicked more than than five unanswered goals in bursts. They can neither hold teams up nor hold the ball in their own forward line.

Too much has been assumed of the effect that rule changes would have on elevating Max Gawn to a form of rucking deity this season. With Brayden Preuss, Gawn was serviceable on Saturday but St Kilda ruckman Rohan Marshall was good and the Demons' rucks could not lift their midfield.

Frustratingly this loss came despite Jack Viney having a good game, Angus Brayshaw getting plenty of the ball and Clayton Oliver playing better. They were OK but not at the level they need to get back to, especially when the supporting cast around them are not doing as much. 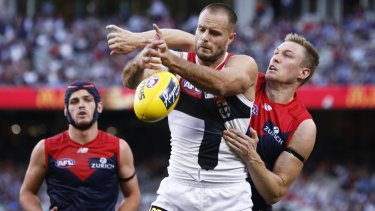 Jordan Lewis was looking his age in his first game back from injury, while Christian Salem did bits but has not done enough.

Tom McDonald is horribly out of form. He is plainly a better player than this but he can’t find the ball at the moment. Sam Weideman had a good finals series but still plays like a young work in progress, which is not surprising given that is exactly what he is. The point of this is it makes it hard to construct top-four teams around raw young forwards in important structural roles.

No one else presents as an alternative target and they have nothing at ground level. Jake Melksham had moments – he took one ripping mark – but he could not do enough. Charlie Spargo had no impact and Jayden Hunt often looked like he was about to do something, but then didn’t. It salted wounds that Dean Kent had a day out for the Saints.

The absence of a forward target begs the question was it a mistake to trade Jesse Hogan? but that is done and pointless to ponder now. McDonald's form will turn.

Melbourne would have been different with May and Lever in the team when they could not stop Tim Membrey and Josh Bruce marking the ball forward.

The St Kilda game raised the question of why Simon Goodwin didn’t send McDonald back to help Sam Frost and the inexperienced (at this level) Marty Hore when they could not stop the Saints forwards. If not there, then put him onto a wing sooner and change things up.

Melbourne’s problem was that whichever end of the ground the ball was they were outnumbered by the Saints. The Melbourne small forwards were terrible, unable to apply the pressure needed and could not help keep the ball inside 50.

When St Kilda won possession the way they were able to move the ball up, transferring play, finding the corridor, speaking to a wider problem of defensive structure than just below par fitness. 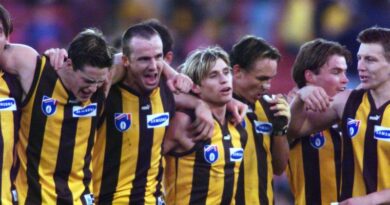 From the Archives, 1999: Hawks overrun Saints after trailing by 63