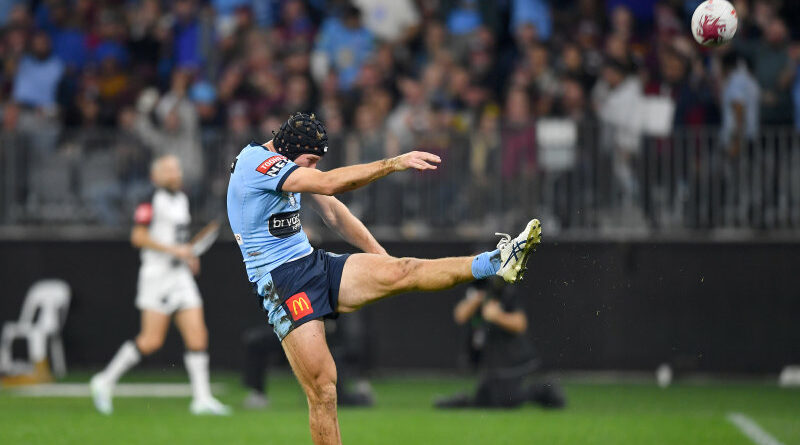 Matt Burton suspects he is inside the minds of Queensland’s wingers thanks to his jaw-dropping kicks as the State of Origin broadcaster reconsiders how it uses Spidercam to ensure it renains safe from the NSW centre’s freak kicks.

Nine Entertainment Co, the publisher of this masthead, have held special meetings about how the camera which suspends from the top of Suncorp Stadium, allowing viewers an overhead shot of the game, can capture Burton’s bombs and not have its cabling damaged. Spidercam has been used in other sports such as tennis and cricket.

Burton launched a couple of terrifying kicks during game two in Perth, and Queensland coach Billy Slater has stuck with rookies Selwyn Cobbo and Murray Taulagi for Origin III.

Asked whether he was inside the heads of the Maroons wingers, Burton said: “I’d like to think that I am. It was good to get that one out [in game two]. If I get asked to step in there and take a bit of pressure off Nath [Cleary], we’ll see what happens.”

Of more concern for Nine is protecting the camera which hovers above the players and appropriately catching the height of the kicks, with Burton claiming he attempted to kick as high as Spidercam during the side’s captain’s run at Optus Stadium.

“I’ve seen it up there and I’ve tried to hit it in the captain’s run,” he joked. “It’s hard to tell if you’re going to hit it or not, but hopefully they’ve got one up there at Suncorp.” 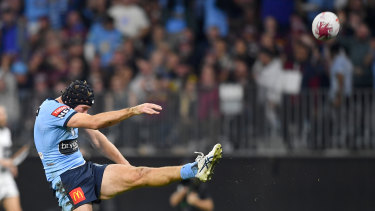 Matt Burton puts up a bomb during game two in Perth.

NFL scouts and Australian-born former punter Ben Graham have been wowed with Burton’s technique and rare kicking ability, which will again be used as a weapon for the Blues as they try to win their first Brisbane series decider in 17 years.

Burton’s longest kick of the season has been measured at more than 70 metres, but it’s the height which he can generate that is revolutionising the way rugby league players use their boot as an asset.

“We’ve got two player cams for [Nathan] Cleary and [Cameron] Munster, then the coaches’ cam as well, but if he breaks our beloved Spidercam we know where to send the invoice.

“Burton’s bomb is an incredibly powerful weapon in his arsenal and we’ve had to rethink a few camera angles to best cover it for everyone watching at home.”

The 22-year-old trained strongly with the Blues at Kingscliff on Thursday having sat out the side’s first serious session in driving rain the day before with a minor calf complaint.

The Bulldogs star put up a couple of skyrockets during the session, one ball bamboozling stand-in fullback Jack Wighton, while Daniel Tupou has previously spoken about the difficulty in diffusing Burton’s bombs.

He’s not the only kicking threat the Blues pose, with halfback Cleary having mastered the art of the floating bomb which has baffled a number of fullbacks in the NRL and will be used to test Queensland’s Kalyn Ponga.

Viney insists it’s not yet ‘panic stations’ for struggling Demons

Bennett ‘pissed off’ by feud ‘lie’