Home » Rugby League » Why the Suns backed Dew over Clarkson 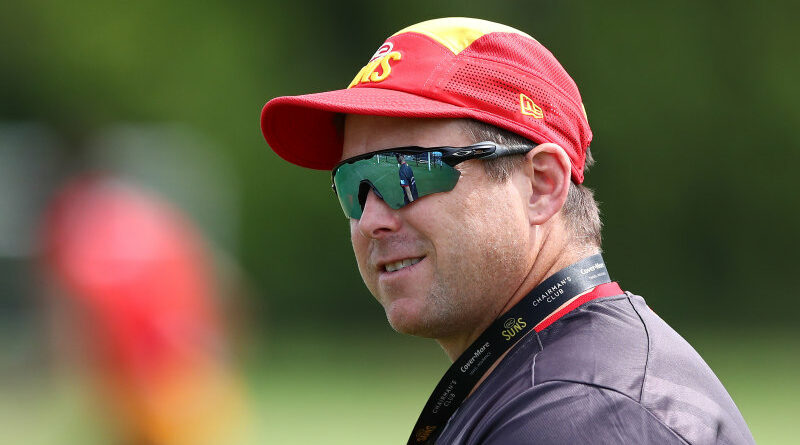 On the face of it, Gold Coast’s decision to back Stuart Dew after just seven wins in 16 games this season looks risky when the alternative was to have wooed four-time premiership coach Alastair Clarkson to the club on a long-term, AFL-backed deal.

At the end of last season the football gods seemed aligned to deliver Clarkson to the Suns from 2023 after another bottom-four finish for Dew, when the super coach chose not to pursue the Carlton coaching job and instead set about a year of self-improvement, kicking back and new business opportunities. 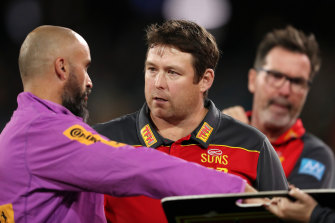 It seems implausible now when you look at North Melbourne’s predicament, but it was Gold Coast at the end of 2021 that was truly testing the patience of its fretting father Gillon McLachlan at head office. Back then AFL bosses were prepared to supplement Clarkson’s pay packet with a generous ambassadorial stipend outside the soft cap and Clarkson, after a difficult and bruising final year at Hawthorn, was more than open to the opportunity of a new home with a budding playing list.

The AFL’s thinking was that the lure of a proven coach would not only add a much-needed layer of professionalism to the club, but also stem the bleeding of star players heading south as the Suns neared the conclusion of their three-year priority draft package.

But internally the tide had already started to turn for Dew and one key change took place at his own doing. Having always stayed in touch with his former Sydney coaching colleague Rhyce Shaw, Dew was a regular support to Shaw during his annus horribilis during 2020 at North’s undermanned Queensland hub.

When Shaw stepped away from senior coaching, Dew was the first to assure him of a job going forward. As the club’s key development coach overseeing an expanded list including nine rookies, Shaw is not even mentioned in the Gold Coast chapter of the AFL Media Guide, but the Suns appear to have finally – and more than adequately – filled what was a gaping hole in their football operation. The club actually recommitted to him several months before Dew, having re-signed Shaw for a further three years until the end of 2025.

This is nothing against his two predecessors, but fledgling football clubs require strong and experienced football bosses and the AFL – largely responsible for putting the wrong people in key positions from the outset – was also losing patience with CEO Mark Evans’ inability to land one.

Wayne Campbell’s availability two seasons after being dumped by GWS shortly after the club reached its first grand final became a clear opportunity for Evans, who had previously tried unsuccessfully to lure Graham Wright to the Suns. Campbell’s appointment coincided with Craig Cameron’s overdue – and COVID-impacted – decision to move to the Gold Coast. So, finally and for the first time, the club had a list boss based in Queensland.

Over this season, Cameron has defied predictions and won the signatures of Ben King, Ben Ainsworth and Jack Lukosius with Izak Rankine expected to commit. If the off-field leadership team has been bolstered, the on-field – after so many early missteps – looks set for the long term under Touk Miller and his co-captain Jarrod Witts, with David Swallow still a key influencer whose contract is in line with that of the senior coach, for whom the leadership group continued to vouch.

The decision to recontract Dew was reached at the club’s last board meeting two weeks ago when Tony Cochrane and his directors approved Evans’ recommendation to open what proved to be fairly simple negotiations.

At the announcement this week, Dew said his CEO and chairman had been true to their word at the end of last year in offering him the best opportunities available to earn a new deal. That opportunity also consisted of a revamped assistant coaching team when the Suns lured Steven King from the Bulldogs and Brad Miller from the Giants via Sydney University, where he had worked with Campbell.

So, the Suns’ decision to stick with Dew, their player-backed bird-in-the-hand, over Clarkson could be seen as the conservative choice and not so risky after all. If Clarkson, who has some big decisions to make and soon, was Gold Coast’s AFL insurance policy, Dew was the club’s long-term investment.

He walked into the club as a 37-year-old as Gary Ablett jnr walked out and endured a difficult Commonwealth Games-afflicted maiden season based largely at Bond University and unable to play at home for more than half a season. Co-captains Tom Lynch and Steven May were gone within his first full year.

The club might have continued to battle but the two COVID years and particularly 2020 ultimately helped the Suns. Players weren’t the only football people who experienced first-hand what winter felt like in Queensland, and it was during that year that Steven King first considered leaving the Bulldogs for warmer climes. James Frawley, now a part-timer at the club, was another.

With the player exodus stemmed and Dew surrounded by an experienced off-field team with a stronger focus on player development, Suns bosses believe the coach has eliminated some rough edges and grown into the role, finally capable of a clear run at September. Wednesday, the contract announcement day, felt genuinely like a good day for the Gold Coast and the players’ support for their coach felt infectious.

His new contract comes as the club nears the end of that generous rescue package granted in 2019 by an AFL Commission cognisant it had botched so many key pillars of a football club when it launched the competition’s 17th team in 2011. Mistakes that continued to gain momentum.

The club will have to bid for its Gold Coast academy players and probably for those further north as Darwin becomes a next-generation academy. While the AFL has yet to rule on the extra rookie spots it granted the Gold Coast, the priority picks ended with last year’s draft.

So the Suns have moved beyond life support and frankly should continue to challenge for a place in the eight this season with finals now an expectation for Dew in 2023.

If Mike Fitzpatrick was still chairing the AFL, he would be telling the club he granted the green light 14 long years ago that there are no more excuses.