Greater Western Sydney defender Zac Williams has told the club he will explore his free agency options, with Carlton looming as his likely destination.

In a club statement, the Giants said Williams "has informed the club that his preferred destination is a Victorian club to be closer to his sister who's based in Albury". 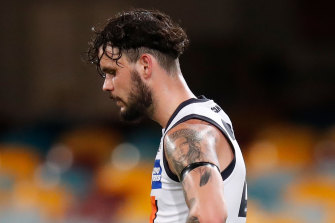 Carlton are desperate to add to their midfield depth and see Williams as the right fit to play alongside Patrick Cripps.

Wiliams has mainly played across half-back for the Giants but has shown an ability to play in the midfield, including in finals.

North Melbourne and St Kilda have also shown interest in Williams, while Essendon could be a late suitor depending on how many players leave the club.

Conor McKenna is returning home to Ireland and Adam Saad is talking to other clubs.

"It's disappointing to receive this news as Zac has come a long way since coming through the Giants' Academy pathway," club football boss Jason McCartney said.

"We understand that free agency is part of the current football landscape and that the players have the right to go down this path."