Few have trolled AFL more in the past three years than ARL Commission chairman Peter V’landys.

In 2020, when the AFL relocated the grand final to rugby league stronghold Brisbane because of COVID-19 lockdowns, he told Channel Nine’s Today: “It’s like people going to an ABBA concert when they’re AC/DC fans.”

In 2021, when Fox Sports’ Matty Johns asked him about the rival code, he called AFL “such a boring sport”. Asked what he would watch if he had the choice between AFL or rugby union, V’landys replied: “The Flintstones.”

Last month, after announcing the NRL grand final would be staying in Sydney after his ugly battle with Premier Dominic Perrottet, V’landys said: “We wanted to give it to a city that needs a major football event, that’s why we’ve gone with Melbourne … Just kidding! Greetings Gil [McLachlan, the AFL chief executive] if you’re watching”.

The snobs at the AFL won’t even dignify V’landys by mentioning his name, nor rugby league for that matter, but you can bet they’re laughing deep into their Aperol Spritz — the official drink of the AFL, I’m told — after hatching a mammoth $4.5 billion, seven-year broadcast deal with Seven and Foxtel.

Since the AFL trumpeted the deal on Tuesday night, there has been widespread concern among rugby league powerbrokers about what it means for the future of their code.

ARL Commission chairman Peter V’landys says rugby league has nothing to worry about after the AFL hatched a massive broadcast deal.Credit:Rhett Wyman

Specifically, they are concerned about the yawning gap between the AFL and NRL deals.

How wide the gap is depends on whom you ask, but figures being thrown around range from $100m per annum to as much as $260m per annum.

Comparisons between broadcast deals are often problematic, but more so this time because the new AFL deal is over seven years from 2025. The NRL’s new five-year cycle with Foxtel and Channel Nine (publisher of this masthead) starts in 2023.

The 18-team AFL also plays an extra game per week, although the NRL will add a 17th team, the Dolphins, from next year in a move that secured an additional $100 million over five years from Foxtel.

No matter how the NRL wants to spin it, the AFL deal is a serious blow. This column is only being written because of the legions of rugby league types — including those loyal to V’landys — calling to express their concerns. “Catastrophic” is how one club chief executive described it.

They identify V’landys negotiating a seven-year extension with Foxtel during the pandemic in 2020 as the moment the NRL blew it.

According to various sources, then NRL chief executive Todd Greenberg and his then chief commercial officer, Andrew Abdo, presented a paper to the commission in late March strongly advising against signing a new broadcast deal during the pandemic.

Every major sport in the world spruiks the value of new broadcast deals. Chief executives and chairs hang their hat on them. McLachlan will be dining out on the AFL’s for the rest of his days. Yet, the NRL refuses to divulge the number.

The figure I’ve been told — via NRL sources — is the Foxtel component is about $200m a year from $185m in the previous deal. Along with free-to-air, New Zealand, international and radio rights, the total deal is about $400m per year.

How did this happen? What about V’landys’ covert trips to Los Angeles to break bread with News Corp boss Lachlan Murdoch? The fact-finding missions to Amazon and Netflix to make sure rugby league was backstroking in cash for years to come?

When the free-to-air component with Nine was finally struck in December last year, clubs were told the NRL had wrung every available cent out of the broadcaster.

Evidently not: Nine (and Stan) threw $500m at the AFL in the latest negotiations but still missed out to Seven and Fox.

“So what?” you might ask. “Who cares what the AFL got? Rugby league’s going great. Leave the Man of Golden Feathers, as Roy and HG call him, alone!” 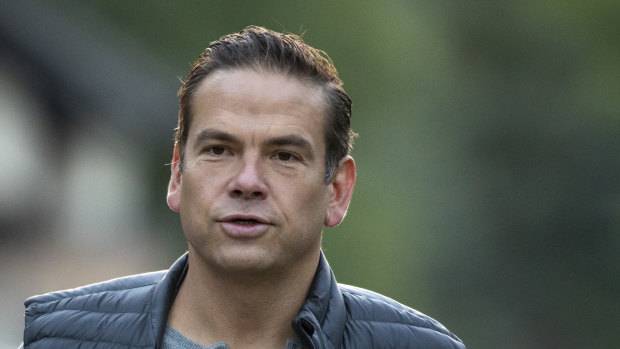 Rugby league will forever be in V’landys’ debt for the dogged manner in which he navigated rugby league through troubled COVID-19 waters.

On his and Abdo’s watch, the game survived, it increased revenue, recorded profits and gave some of that money back to the players. The NRL even bought a bar on Caxton Street.

But the real concern is what the AFL can do with their recently acquired goldmine.

With a strong administration, financially strong clubs and world-class stadiums, there’s not much left to fix.

It means the AFL can heavily invest in expansion and development, aggressively taking on rival codes with typical arrogance and ruthlessness.

The monster AFL deal sees a further slipping of the V’landys crown, but I’m sure he’ll survive. He’s got enough supporters to make sure that happens.

But what ultimately suffers most is rugby league, left once again to make up the shortfall.

Chat with the ARLC chairman

V’landys was chairing a meeting of Kangaroos selectors when contacted for a response. He returned our call and this is what he had to say …

Andrew Webster: Is the AFL’s deal of concern to you?

Peter V’landys: No, not at all. What you’ve got to understand is this deal doesn’t come into effect until 2027 [sic], so it’s two years away. We will be negotiating our deal pretty soon to take us up to 2031. We set up the platform for AFL to be able to do this. If the game hadn’t started on May 28 [2020], and both the NRL and AFL cut their broadcast requirements to make Fox and Nine viable because they were in uncharted waters, they [the AFL] wouldn’t have the platforms to do what they’re doing. We’ve got a few things up our sleeves, which I can’t say too much about it, but the clubs have nothing to be worried about.

AW: Some are saying the difference between the two deals is as much as $260m per annum. What do you say to that?

PV: No. Nope. And you won’t know until the annual accounts are put through because a lot of it’s contra. They’ve also added the Telstra deal, which isn’t in ours. But I’m not concerned because we will be negotiating. We did them a favour, now they’ve done us a favour. We will be maximising our rights now.

AW: Was it a mistake doing the deal with Foxtel during the pandemic?

At the time, Fox needed an asset on its sheet to continue its viability. If we didn’t come into play, there’d be no Foxtel.

If Foxtel coughs, all the codes catch a cold. If you haven’t got them in play, the other parties won’t be paying as much as they should because you need competitive tension. When COVID-19 hit, they were the only ones. If they went under, there was no-one else available.

AW: Is it right that Greenberg and Abdo presented a paper to the commission advising against it?

That’s not correct. Complete rubbish. I was chairman and that was never, ever discussed. Todd had left by the time we started negotiating with Fox.

(Abdo also told this column that no paper was presented. Various sources from the NRL at the time refute this but wouldn’t go on the record).

AW: Why can’t you divulge how much Foxtel paid?

There’s a confidentiality clause in all our agreements. What does it matter anyway? It’s the net profit that counts. It’s what you distribute to the clubs and players. We’ve distributed more to them in the history of the game. Our revenues next year are the highest they’ve ever been. You can’t take one aspect and then ignore the rest.

“We will win today!” — So declared Wests Tigers chairman Lee Hagipantelis, resplendent in trademark black fedora on a jaunty angle, at a pre-match function at Leichhardt Oval on Sunday. Canberra led 42-0 at halftime and won 56-10. When all else fails, there’s always delusion.

THUMBS UP
The Sydney Swans are one match away from a grand final appearance after beating defending premiers Melbourne in the first week of the AFL finals. The Demons shut down Buddy Franklin but, in an encouraging sign, that still wasn’t enough to stop the mighty Bloods storming into the preliminary final at the SCG next weekend. 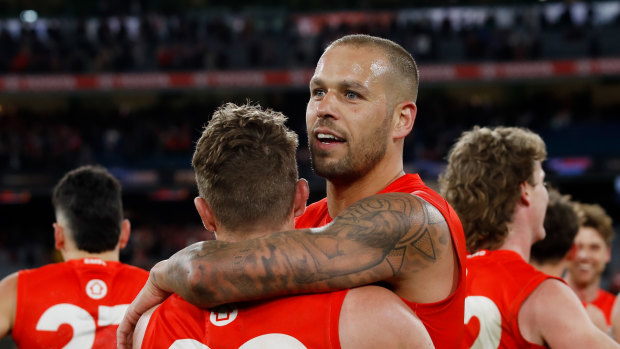 Lance Franklin and the Swans are one win from the grand final.Credit:AFL Photos

It’s a big weekend for … Ben Seymour, the eastern suburbs personal trainer to the stars (and Oporto-loving sports reporters) who will on Saturday run 84km across Bali, coast to coast, in the Bali Hope Ultra Marathon, raising much-needed money for the Bali Children Foundation, which helps thousands of kids complete school and find employment. More info: www.bali-hope.com.

It’s an even bigger weekend for … all you slaves to NFL fantasy football, gibbering incessantly for months about trades and drafts and sleepers only to sleep through the 3am alarm before Red Zone starts. It’s quite pathetic for grown men to behave this way … The NFL season starts on Friday with early Super Bowl favourites the Buffalo Bills meeting defending champs LA Rams at SoFi Stadium.

The 10 games to decide the AFL finalists