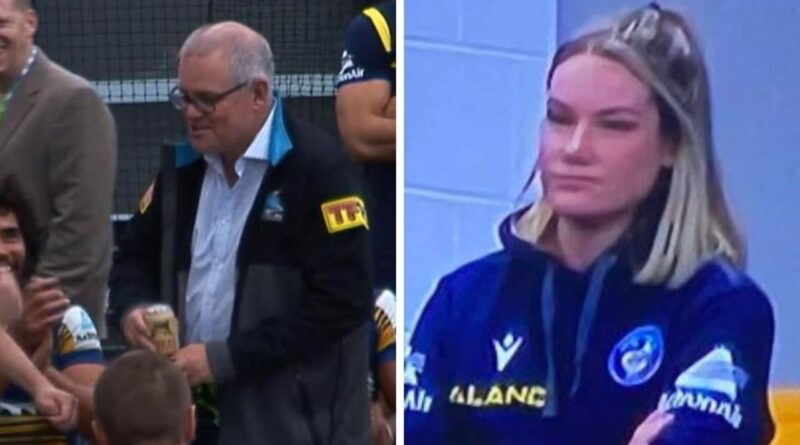 The NRL sports scientist behind the viral Scott Morrison death-stare image has released a statement to clear up rumours surrounding her decision to delete her public message.

The Parramatta staffer who voiced her outrage about Morrison attending Saturday night’s NRL game against Cronulla deleted her tweet after sparking a frenzy on social media Sunday.

An image of Tahleya Eggers with her arms folded, staring daggers at Morrison while he visited the side’s changeroom to congratulate the players on their 28-4 win over his beloved Sharks went viral, and she owned her stance in the aftermath.

“Proud to claim this one,” Eggers wrote on Twitter.

“I will not respect a man who has the time to shake hands of men who have won a football match but is ‘too busy’ to attend the March for Justice.”

If looks could kill. Photo: @DesignedToFadeSource:Twitter

She was referring to Morrison’s refusal to come out of Parliament House and meet the thousands of women who gathered in Canberra earlier this month — and across cities around Australia — to listen to their concerns.

The twist came as The Daily Telegraph reported Eggers would not face any sanction from the club for her dig at the Prime Minister, who has been heavily criticised for his approach to dealing with disrespectful attitudes and behaviour towards women, particularly within parliament.

A club spokesman said in the report the Panthers had reviewed the public comment and gave Eggers the club’s support because they were personal comments that did not reflect the club’s views.

She deleted her tweet the same afternoon, leading to unfounded rumours that Eggers had been forced to delete the tweet.

Eggers on Monday released a statement through the club to deny the rumours.

“I wanted to make a brief statement regarding the last 24hrs,” Eggers said.

“As the club stated yesterday, I was responding to a social media meme that was not of my making. These are my personal views and I didn’t expect that it would get the coverage that it has.

“I want to make clear that I have had nothing but support from the club over this period. At no stage has anyone asked me to remove or change my post.

“It was my decision to remove it and place my social media on private because of the level of attention I was receiving.

“I love working for the Club and would now like the focus to return to the NRL season ahead.

“I won’t be making any further comment on the matter.”

Scott Morrison only had a sip.Source:FOX SPORTS

Eggers’ scowl came as Morrison knocked back an offer from Eels star Reed Mahoney to skol a beer with the players.

Mahoney looked like a kid on Christmas morning, clapping his hands, roaring and pumping his fists, determined that peer pressure would encourage Morrison to chug.

He was let down, though, as the politician took only a small sip, but the rest of the Eels were up on their feet cheering along anyway.

Morrison has been engulfed in scandal over the past six weeks after Brittany Higgins’ allegation she was raped in a ministerial office at Parliament House and a historical rape accusation being levelled against Attorney-General Christian Porter — an accusation Porter has vigorously denied.

Why ‘selfish’ Cameron Smith risks being labelled a ‘hypocrite’