Home » Rugby League » ‘Worth his weight in gold’: Why Lance Franklin has been pivotal for Sydney

It is an intoxicating mix that has served Sydney so well for decades. A star full-forward flourishing in a side that’s in the premiership mix.

There was Warwick Capper in his prime for three seasons in the 1980s, Tony Lockett in the mid-to-late 1990s, Barry Hall for the first decade of this century, and Lance Franklin for the past nine years. 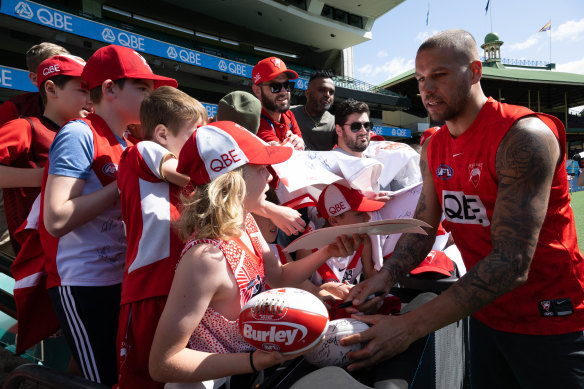 Fan favourite: Lance Franklin has played a key role in helping sell the Swans to the masses.Credit:Sydney Morning Herald

“I think it’s a pretty good combination when you have a marquee forward and a good team,” club great Paul Roos said.

“It’s always worked, that’s the bottom line. And the other common theme has been the teams were pretty good, too. ‘Plugger’ [Lockett] came up there when they weren’t a great team, but he was such a great player. There were a number of others that came as well – Stuart Maxfield, Kevin Dyson, Cameron O’Brien [and Roos himself]. It’s the combination – the marquee player with the good team makes a huge difference in Sydney, there is no question about that.”

Roos, the champion utility, should know from first-hand experience, for his Fitzroy teams battled Capper’s Swans, he played alongside Lockett, including in the 1996 grand final, and later coached Hall to a premiership in 2005.

“With Lockett, Hall, Capper and ‘Buddy’, they appeal to the people who don’t know much about the game as well. It opens up the market slightly to an awareness factor that doesn’t necessarily need to exist in Melbourne because everyone follows footy,” Roos said. 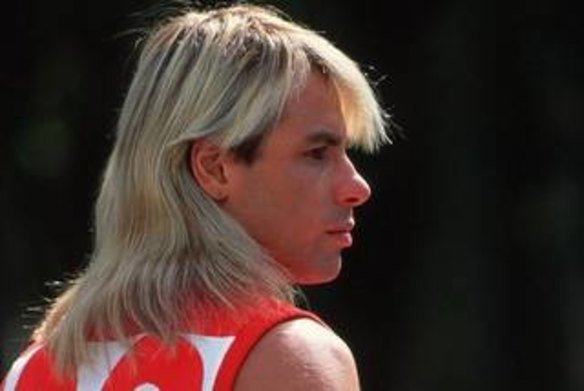 Warwick Capper was a major marketing tool in promoting the Swans in Sydney in the high-flying 1980s.

“That’s a big part of it as well. Buddy’s skill set, kicking goals from the boundary, his ability to create things from nothing, is a great marketing tool for the game, as was Barry’s, Tony’s and Warwick Capper’s. To die-hard footy people, they love it. For people that don’t know much about footy in Sydney, which is still quite a few, the appeal is quite good as well.”

That same appeal should ensure robust broadcast ratings in Sydney – and across the nation – on Saturday. AFL chief executive Gillon McLachlan has even floated the possibility that this will be the highest-rating grand final on record. Over the past two decades, there have been only four grand finals that have enjoyed a national television audience of more than four million – and each involved the Swans.

Sydney had 395,000 viewers last year watch Melbourne’s breakthrough win over the Western Bulldogs but, in 2016, when the Swans and Bulldogs clashed, the average Sydney audience was 534,000 in-home viewers and a peak of 705,000. It was the highest Sydney audience since they won the 2012 grand final against Hawthorn.

Roos’ observation about a star forward and a winning team rang true last weekend when Sydney’s two Sunday newspapers gave the home team’s win over Collingwood major prominence. The Sun Herald’s primary front-page picture was of the Swans, while The Sunday Telegraph also ran the Swans front page, and the first four pages in sport.

Former skipper Kieren Jack, living in Sydney, said the city had embraced Franklin and this side.

“Sydney has always loved a winning team and clearly there is a new sense of energy coming through with this young group,” he said.

In a market still largely dominated by rugby league, along with strong support for rugby union, Franklin’s value cannot be underestimated. He has become, as club chief executive Tom Harley claimed this year, “iconically Sydney”.

While he has not yet delivered a premiership with his second club, having had two with Hawthorn, it’s hard to argue that his nine-year, $10 million mega-deal has not been a success.

There have been three grand finals – 2014, 2016 and this year – four All-Australian selections, including as captain in 2018, two Coleman Medals. He has also been the Swans’ leading goalkicker six times.

He has been a regular headline in the country’s toughest media market, even in 2019 and the COVID-impacted 2020 when the Swans weren’t in premiership contention. While soft-tissue injuries limited him to just 10 of a possible 39 games in those seasons, he was still a talking point.

Kylie Rogers, the AFL’s general manager of customer and commercial, said Franklin had been pivotal in spreading football’s gospel in a challenging market.

“He has been incredibly important for football as a whole. But when you look at the NSW and Sydney market, he is so visible. He is adored by kids and all generations. He is a superb player and is worth his weight in gold and has been fantastic. We are very proud of him and are delighted that he has extended [his contract],” Rogers told The Age and Sydney Morning Herald.

“It [Sydney] is a non-traditional football market, if you can say that, but everybody knows who Buddy is. Of course, that has helped us in terms of our accessibility and brand awareness of the game. He has been pivotal in that.” 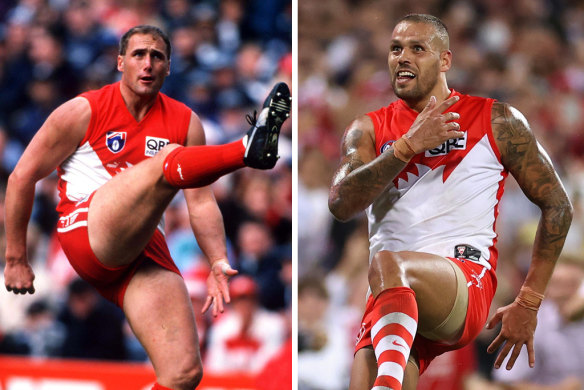 Fan favourites Lance Franklin and Tony Lockett have been key assets on and off the field.Credit:The Age

There are still whispers from industry figures that he needs a premiership to truly frank his contract, but those involved in the deal at the time – who prefer not to speak on the record – have long insisted all parties have won. Gerard Healy, the Swans’ 1988 Brownlow medallist, and a prominent commentator, has long said the deal was a “great success”, pointing out years ago that “we’re spending 30-odd million dollars out in the west [of Sydney] to get people to talk about footy — Buddy’s doing it for one [million dollars].”

This year Franklin, free of injury, has booted a team-high 52 goals, and only once – against Melbourne, when curbed by Steven May – did he fail to contribute a major. At 35, he was still the Swans’ most important forward in the preliminary final, reinforcing why he had been so keen to play on next year amid debate about how much the contract should be worth.

Franklin, wisely, parked contract negotiations late in the season as the spotlight on his future intensified, before early this week confirming he had signed a one-year contract extension, thereby short-circuiting speculation about his future.

“I’m over the moon with this decision. It hasn’t been easy. I’ve been playing for 18 years, it’s a long time in the game. I’ve got a young family now. It was a hard decision but my passion for the game, my love for the football club, my heart was still here,” Franklin said. 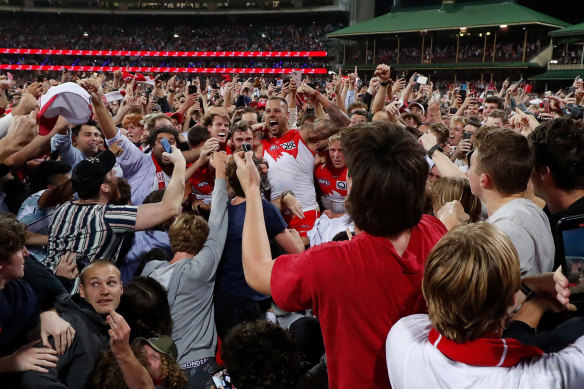 Harley said the Swans were delighted to have struck a new deal. “We have been really clear that we wanted Lance to play for the Swans for as long as he wanted to,” he said.

Coach John Longmire has long said the football world should just appreciate Franklin while they can.

“He’s been playing for such a long time and given the game so much. Sometimes we can look into things and want answers in black and white … sometimes you’ve just got to sit back and enjoy the moment with him and see him play his footy and do his stuff,” he said.

That “stuff” famously included his 1000th career goal in round two, becoming only the sixth man in VFL-AFL history to do so. Incidentally, it came against Geelong, prompting a sea of red and white to spill onto the field, and join in the celebration.

That was more an event than a match, something that ties into the Sydney market.

“We think that Lance has been an amazing contributor to the club and the code and has become iconically Sydney and part of the Sydney Swans family,” Harley said.

What will be intriguing is how the Sydney market reacts when Franklin’s time is finally up.

Jack this week spoke of the club’s famous “Bloods culture”, built on strong values and expectations, standing the club in good stead, but that’s not as marketable as a Franklin snap posted on TikTok.

Roos has seen greats come and go, but believes there is now a greater sophistication in the Sydney market to rally behind the Swans, regardless of whether there is a marquee star on board.

However, in the Newcastle-raised Isaac Heeney, with his blond hair and surfer-boy looks, and the emerging Chad Warner, complete with his bleached cut, the Swans have two poster boys ready to keep the masses happy. And Roos says the club has a shrewd weapon few have noted.

“I think there are two answers to that. The market is strong enough and the team is good enough, for one, but you want to add good talent. And Sydney has always been able to attract good talent, whether it’s Buddy or Barry or Lockett or Warwick,” he said.

“Who is going to be the next Buddy Franklin? If somebody walks through the door, there is no way you are going to turn them down.

“The other thing people have probably underestimated is the [Swans] academy. The academy has had two All-Australians this year [Heeney and Callum Mills], and then you look at the other guys. They have got a ready-made production line coming through, which no-one is really talking about.” 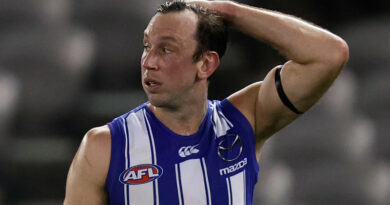 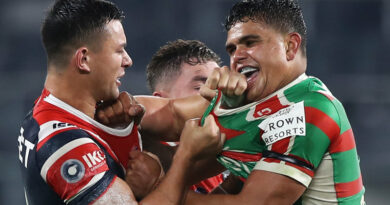