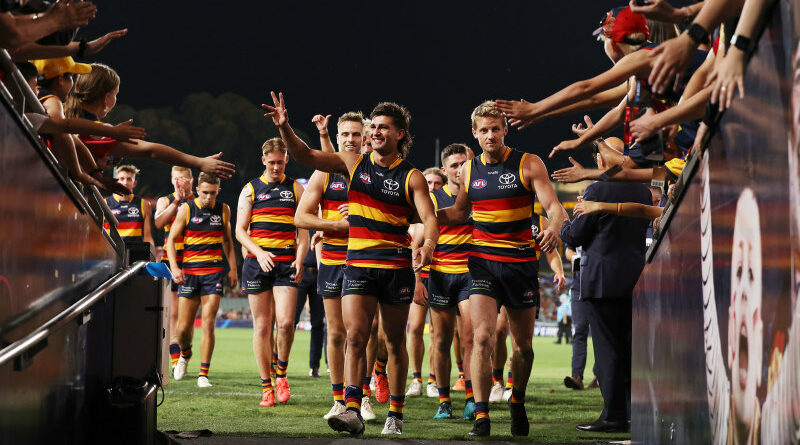 Taylor Walker’s return to action at Adelaide Oval for the first time in nine months ended in triumph for both he and the Crows who pieced together their finest performance of 2022 in securing the prized scalp of Richmond.

Walker, who booted four majors in last weekend’s four-point loss to Essendon at Marvel Stadium in his comeback match from a six-game suspension for racial abuse, monstered the Tigers for four first-half goals before finishing with five. 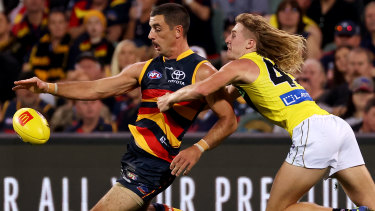 They reaped the rewards of a fast-paced, corridor-focussed approach from the home side’s playmakers, who had too much for Richmond, especially on the inside, despite the dominance of a battered Toby Nankervis in the ruck. 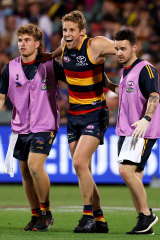 Rory Sloane limped off in the final quarter.Credit:AFL Photos

Walker’s day out was in contrast to his long-time friend and Crows captain Rory Sloane, who limped off in the fourth term after his right leg buckled in a collision with Tiger Nick Vlastuin.

Walker saw off two match-ups with aplomb, boasting too much bounce for veteran Robbie Tarrant and too much nous and craft for the less experienced Ben Miller.

The Tigers, warm favourites before the match, jumped Adelaide with a pair of early majors before the Crows, with Walker booting three of the next four goals, pinched the lead at quarter-time.

With Ben Keays ascendant in the clinches and Brodie Smith potent with his run and carry, the Crows’ lead swelled to 25 points when Himmelberg conjured a marvellous pick-up and snap.

Richmond responded with a champagne, four-goal, seven-minute blitz from their vintage archives to turn the contest, out of nowhere, on its head. 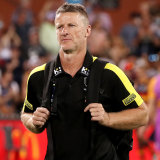 Damien Hardwick leaves the Adelaide Oval after the Tigers’ loss to the Crows.Credit:AFL Photos

Little Liam Baker with a pair of snaps, Jack Riewoldt with an accidental toe-poke goal after Tom Doedee fumbled and slipped over, and Shane Edwards with a smart hook over his shoulder saw Richmond turn that big deficit into a small lead in a heartbeat.

Adelaide didn’t panic and responded swiftly, jagging the next three to lead by 14 points at three-quarter-time and wrestle back control of the game before Rachele took over.

He electrified his home fans with three fourth-term goals at the Cathedral End to put an exclamation point on an electric Easter Sunday from the Crows, who seem to be improving with every outing.

Shai Bolton, surprisingly but unarguably, had his colours lowered by Chayce Jones in the first half but his third-quarter cameo turned the tide the Tigers’ way.

Bolton moved into the centre-square after half-time and his clearance work spared Richmond’s revival.

Former captain Trent Cotchin wound back the clock to fashion his best performance of the season, matching Bolton with his craftiness in congestion either side of the main break.

Cotchin did earn the ire of an angry Walker in the third stanza, though. Walker appeared to receive an errant kick as he dragged Cotchin over the boundary line on the members’ wing and had some choice words to say to the sheepish Tiger veteran after the exchange.

Nankervis was looking worse for wear following an accidental clash of heads with Brayden Cook midway through the second term.

Nankervis went off to have his head strapped and had to go off a couple of times for the blood rule. When the third quarter started, Nankervis was still receiving treatment before sprinting to the centre-square to contest the opening ruck, sans strapping but with his stitched-up nose looking slightly misaligned.

Dominant second half sees Port to victory over Suns