Rugby Australia chief executive Andy Marinos says a cluster of four ruptured Achilles tendons in four months is “alarming” and confirmed the Wallabies’ horrific injury toll will be one of the key subjects in an independent end-of-year review.

The Wallabies will finish their season in Cardiff against Wales on Saturday (Sunday morning AEDT), with coach Dave Rennie needing to draw upon almost his entire spring tour squad to field a team given 11 of the original 36-man squad are unavailable due to injury.

But the carnage of the five-game tour only added to an already extensive injury list suffered by the Wallabies this year, with at least 40 known separate injuries or complaints that ruled players out for selection in a Test match.

The most concerning injuries are a series of ruptured Achilles tendons, to Harry Johnson-Holmes, Quade Cooper and Rob Leota. Taniela Tupou also suffered what is suspected to be a ruptured Achilles tendon in Dublin but scans are yet to confirm the full picture. The quartet face recoveries between six and 12 months, stretching into the 2023 Super Rugby season and potentially threatening Rugby World Cup involvement as well.

Next to joint and muscle injuries, major Achilles tendon injuries are comparatively rare and the spike has raised questions among players and frustrated Super Rugby clubs about how they happened. 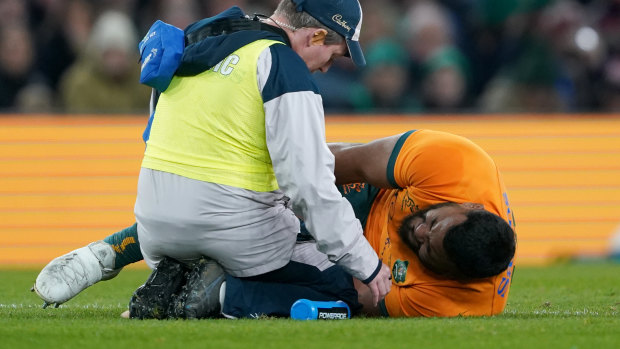 Wallabies wrecking ball Taniela Tupou may not feature at the 2019 World Cup. Credit:Getty

Before their injuries, Cooper and Tupou had missed Tests with calf injuries, Leota carried a cut Achilles into the Melbourne Bledisloe Test after a bike accident, and Johnson-Holmes was injured as an opposing scrummager at training before the England series.

There have also been a number of Wallabies sidelined for long periods, including Samu Kerevi (ACL), Angus Bell (toe), Matt Philip (ACL) and Izzy Perese (knee), and others who have missed multiple Tests with different ailments including stress fractures, soft tissue injuries and concussions.

“It certainly has been unprecedented,” Marinos said. “I look at this list now … the part for me that is puzzling, as much as it is concerning, is just the innocuous nature of some of these injuries. It has all come as a surprise.

“But four Achilles tendons in one season is quite alarming, so absolutely there is going to be a review. It is a very high [injury] incident rate. I am looking at a list and there are 11 guys on this tour who aren’t available now. Rest assured, it is a concern to all of us. We have a World Cup looming and a big Super Rugby season starting up next year, we certainly want all of these guys back on their feet.”

Bad luck has undoubtedly plagued the Wallabies, and Marinos said the team had endured more than its share of “freaky injuries”. Stricter concussion protocols have also ruled more players out than in the past, including Michael Hooper, Nic White and Dave Porecki, who won’t feature this weekend due to head knocks.

Forensically understanding what percentage of the injury list might may have been avoided will be the task of two independent reviewers. Marinos is finalising who will review the team.

“We will be looking at getting an independent review to get a fresh set of eyes and we will certainly be working with the medical team, and management, to see what they’ve picked up. We are going to be thorough,” Marinos said.

The Wallabies are currently searching for a new head of performance after losing highly regarded pair Dean Benton and John Pryor this year. A number of Super Rugby strength and conditioning coaches were called in to tour with the Wallabies across the season. 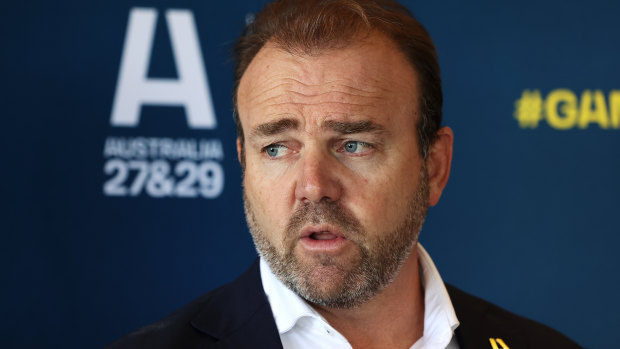 Asked if the changes played a role in the Wallabies’ injury toll, Marinos said: “It is a factor. I don’t think it is an overarching contributor but our two S&Cs have moved on, so that was a bit of a disruption during the season.

“At the same time, we are very aware of player load and management as we go through. It is really important that we get a head S&C locked in for the 2023 season. That’s a priority for us.”

Marinos said injuries will be one part of a “comprehensive” wider independent review that will be conducted in December. Findings will then be presented to Rugby Australia’s board. It is expected Rennie’s future will also be on the agenda.

“It is going to be a full 360, as you would want to, especially going into and preparing for a World Cup year,” Marinos said.

Speaking in Cardiff, Jed Holloway, who has suffered calf and hip injuries this year, was asked about the high number of issues.

“We know our medical staff here are doing everything they can to get the boys ready,” Holloway said. “We’ve just had a rough trot.

“You look at Taniela’s injury … he’s done that acceleration probably a thousand times this year and for whatever reason his Achilles decides to go. Rob Leota, same thing, running into contact, it goes as well. I’m not a physio or on the medical staff but there’s no science in my opinion behind it. We’re also losing a couple of guys to concussions.

“Our medical staff are putting in overs to get us right … to make sure we’re in the best physical condition. It’s hard because there is no definite answer. It does just seem unlucky.”

Watch all the action from the Wallabies’ final Spring Tour clash against Wales streaming ad-free, live and on demand on Stan Sport. 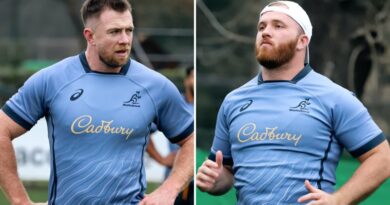