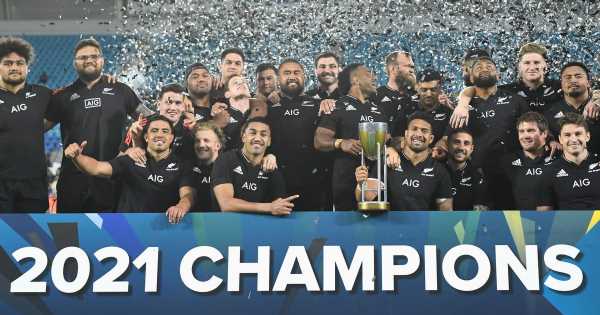 Another Rugby Championship comes to a close with New Zealand sat at the peak of the southern hemisphere, but fans will remember this campaign for more than just another All Blacks title.

Australia rallied to clinch four consecutive wins in the competition for the first time in their history, content to take the runner-up spot after turning a corner midway through the tournament.

South Africa were perhaps fatigued after a demanding series against the British and Irish Lions, but a Week 6 win over New Zealand offers encouragement despite their bronze medal.

Spare a thought for Argentina, too, who settled for the Wooden Spoon having failed to collect a single point for only the second time since they joined the southern-hemisphere contest.

Mirror Sport breaks down all that and more as the dust settles on a Rugby Championship like no other. . .

An ongoing theme among South Africa's critics this summer has been in regards to to the Springboks' style—or what many might suggest is a lack thereof.

While the reigning world champions may not have New Zealand's reputation for high-risk, high-reward play or Argentina's penchant for flair, Saturday's win over the All Blacks showed that whatever they have got, it works.

Director Rassie Erasmus and coach Jacques Nienaber— along with some players —have each jumped to the team's defence in recent weeks insisting South Africa's compact approach has its place.

And who's to argue? Despite successive defeats to Australia, the Springboks doubled down on a kick-heavy, pressure-based strategy that ultimately took them to victory over the eventual champions.

If it's good enough to win the World Cup, after all, the Springboks will feel vindicated that their approach to the sport works for them, and a series win over the British and Irish Lions is fine consolation for their summer.

Do you think South Africa will retain their title at the 2023 Rugby World Cup? Let us know in the comments section.

Australia are back, and rugby's better for it

There's hardly a rugby fan alive who doesn't revel in watching New Zealand at their free-flowing finest, but most neutrals would agree the Rugby Championship is better off without one team dominating its ranks.

South Africa won the tournament in its watered-down 2019 edition, but this year it was Australia's resurgence that got the blood moving after acclimating in the wake of successive defeats to the All Blacks.

Quade Cooper's return to Test rugby after four years in the wilderness has provided some much-needed leadership at fly-half, but he's far from the only success story that's emerged in recent weeks.

The back line looks close to cemented with Samu Kerevi and Len Ikitau in midfield, while Taniela Tupou and Folau Fainga'a look capable of offering foundations in the front-row for years to come.

Back-to-back wins over South Africa and a second-place medal gives plenty of hope in preparation for the 2023 Rugby World Cup, with questions now turning to what's in store for the nation's Giteau Law selection policy.

The only team who failed to play a single Rugby Championship fixture on home soil, Argentina did a lot of giving this summer without receiving much by way of compensation.

Coach Mario Ledesma rightly raised concerns when the Pumas were the only team omitted from a rearranged captain's photo shoot, a stark reminder that Argentina perhaps aren't at the top of organisers' priorities.

A point-less campaign and arguably their worst performance in the tournament to date leaves little room for optimism, not least thanks to the scarce help on hand from those in power.

We'd already got glimpses of the trialled 50-22 earlier this year during the Super Rugby AU competition, but a first Test-level experiment would have to also be deemed a success for this new spin on the game.

While the tweak hasn't made teams as kick-happy as many predicted it might, the 50-22 has offered attacking teams reward for their ingenuity and forced defences to reconsider how they go about their work.

The Test arena sets the tone for law changes, and of the new initiatives being trialled during the Rugby Championship, this kicking concept in particular has the potential to inject some much-needed fun back into the game.

Having initially got his break in the Test XV as a short-term deputy for Marika Koroibete, Andrew Kellaway comes away from this tournament arguably as valuable as his Melbourne Rebels team-mate.

Seven tries in a Rugby Championship is great going for even the most experienced of scorers, but the emerging Wallaby's haul reminds of Julian Savea's early impact in this competition playing for New Zealand.

Kellaway's killer touch in front of the line could be required all the more if Koroibete's impending move to Japan keeps him out of Test contention at all—unless Australia ease their selection policies.