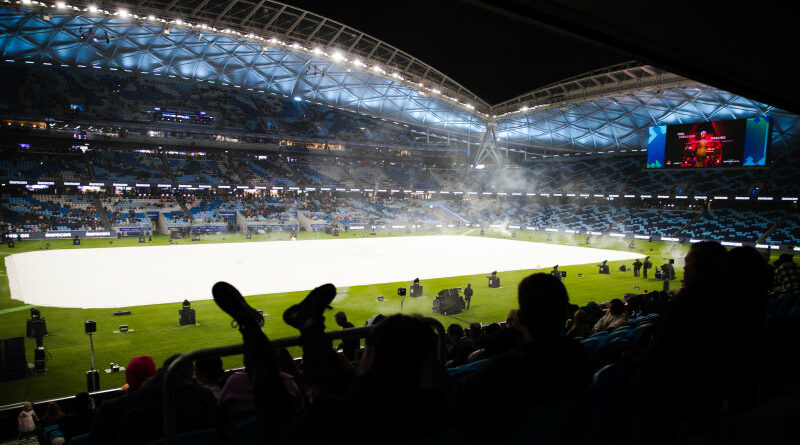 The Bundy Bar will be back at Waratahs games at the new Allianz Stadium next year. Or a 2.0 version, at least.

The Waratahs are exploring options to revive a party zone for games when they return to their home ground in 2023.

Rugby fans of a certain age will remember the popular Bundy Bar at the northern end of the old SFS, which would be full of young punters after packed Waratahs games in the 1990s and 2000s.

There isn’t scope for a similar bar in the new venue, but the Waratahs are talking to Allianz Stadium officials about copying soccer teams such as the Wanderers at CommBank Stadium (and likely Sydney FC at Allianz), who remove seating to set up standing areas for active support.

That would serve to give fans a “Leichhardt Oval hill” kind of space, said Waratahs boss Paul Doorn. Like the old Bundy Bar, the hope is that the northern end can stay open after games, too. It’ll have a new name, with NSW Rugby talking to prospective commercial partners.

“It will be similar, but different,” Doorn said. “We are extremely excited about getting back to Allianz Stadium, and want to make Waratahs games a real event and a great social occasion.” 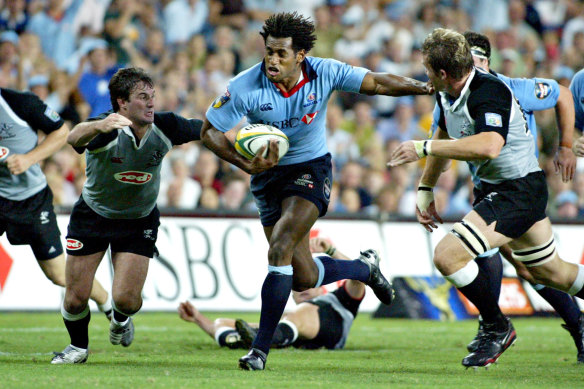 Lote Tuqiri tries to get into the clear during a blockbuster Waratahs clash against the Sharks in 2004, when the Bundy Bar was a hive of activity.Credit:Fairfax

Rugby history to live on

It is one of the iconic Australian rugby pictures: Wallabies fullback Jim Lenehan at full stretch scoring against the Springboks in 1965 at the SCG, with an amazed ballboy watching on.

Lenehan was a rugby rock star who played for the Wallabies straight out of school in the late 1950s. Among his many athletic gifts was kicking goals, with heavy leather balls and old boots, from beyond halfway. 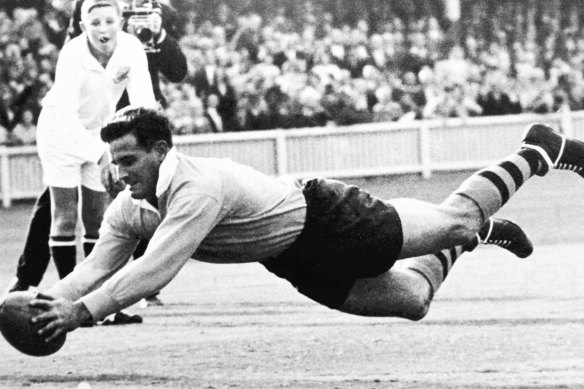 A huge poster of Lenehan’s diving try, along with a big picture of the 1927-28 Waratahs, hung above the dressing rooms in the old Concord Oval. But when the venue was demolished for a rebuild, the pictures were ripped down and thrown away.

In James Curran’s book Last of the Dream Sellers, he recounts how David Campese was dismayed in 2020 when he visited Concord and came across the ripped up pictures on the ground. He filmed them and posted about the disrespectful treatment. 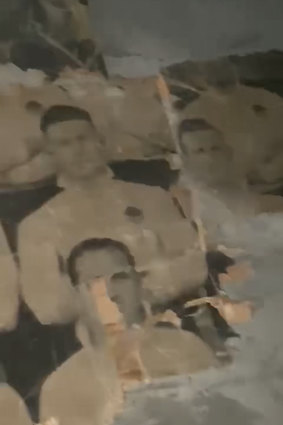 The good news is the pictures are to get a new home, in the new NSW Rugby Centre of Excellence at Daceyville.

Doorn – a former West Harbour colt – told us while the fit-out of the new facility is still being finalised before an expected mid-October opening, they would factor in displaying the images of ex-Waratah Lenehan and the 27/28 Tahs in the new facility.

“All the players and staff have made it clear that it’s really important to acknowledge the past, the present and the future of NSW Rugby,” Doorn said.

Marika Koroibete has been lauded and lambasted in equal measure for his try-saver on Makazole Mapimpi in Adelaide last week, but you can bet it was one-way traffic in the Wallabies’ dressing room after the match.

So dominant was the Fijian winger’s performance that the team ran out of superlatives to hurl his way. Eventually, team manager Chris Webb appointed Koroibete “honorary chair” of Rugby Australia.

The real chairman, Hamish McLennan, was in the dressing room and took off his chairman’s tie and put it on Koroibete’s neck.

The winger, who famously declared himself captain during the first Test in Argentina, leapt up in excitement and started barking orders. One comment brought the house down: “Who wants a new contract?”

And that tackle? It fired up South Africa, but our inquiries have determined there was no formal complaint from the tourists, and the SANZAAR citing panel determined there was an attempt to use arms and was not “reckless″⁣ enough to warrant an off-field yellow, let alone a red (and therefore a charge). World Rugby also had no problems with it.

Reality has been in short supply this week with the latest Joseph Suaalii flare-up, so consider this: $2 million a year would make him the world’s highest-paid rugby player. From people who know the global rugby market, that title is now held by Maro Itoje, who is on $1.7 million a year.

It would also earn him twice as much as the current highest-paid player in Australia, Michael Hooper. The real salary bracket for Suaalii would be $500,000 to $700,000. 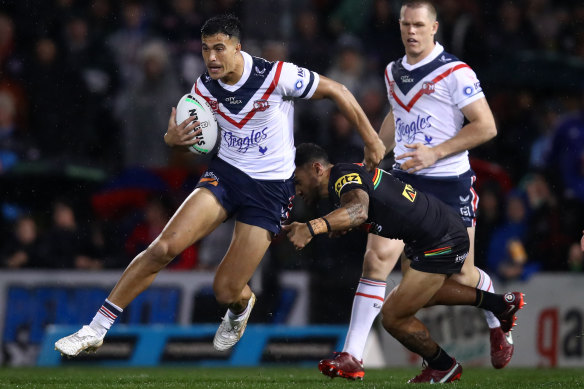 Since it stopped being a poaching ground for league, rugby has been a conveniently opaque global market for league agents to drive up the value of their clients. It was Toulon and French rugby for a while, then Japanese rugby. Now its debt-laden Australian rugby. The challenging part, it seems, is not pushing the boat out too far on the wildly inflated figures.

There is plenty of tension inside Australian rugby about the “league hit list” storyline. It’s intended to be provocative, and while some are stoked with the resulting publicity, others are unimpressed with the impact it has on retention and development, and the overall look when women’s rugby and the community game are run on financial fumes.

It takes a bit to render Michael Cheika speechless, but the Pumas coach was a bit lost for words when asked about an Argentina rugby fan getting a tattoo of the Australian on his left buttock this week. Supporter Ojeda Brian made a pledge he’d get the ink if the Pumas beat the All Blacks, and he followed through.

“Fans is short for fanatics,” Cheika said. “You are playing rugby for the fans, they’re very important. I’m not sure where the tattoo is, or what it looks like but … thanks.”

Good luck Mr Brian. You may need it. 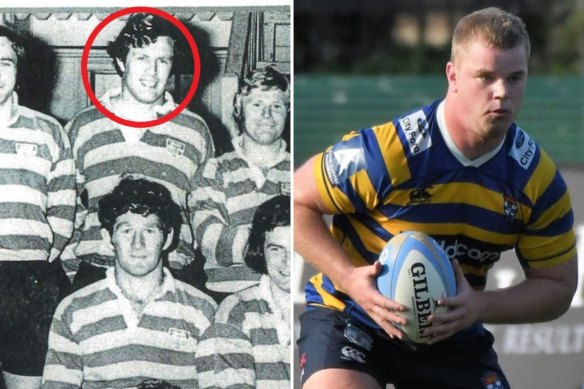 Sydney University tight-head prop Darcy Breen will pack down against Gordon and is following in his grandfather’s footsteps.

Half a century ago, in 1972, Breen’s grandfather, Richard Edmonds, played for Sydney University in a Shute Shield grand final. The opposition? Gordon. Position? You guessed it, another tight-head prop.

Sydney Uni prevailed that day 10-6 at Sydney Sports Ground. The Students and Gordon haven’t faced each other in a Shute Shield decider since.

Watch every match of The Rugby Championship on the Home of Rugby, Stan Sport. Continues this weekend with All Blacks v Argentina (Saturday, 4pm AEST) and Wallabies v South Africa (Saturday, 7pm AEST). All matches streaming ad-free, live and on demand on Stan Sport. 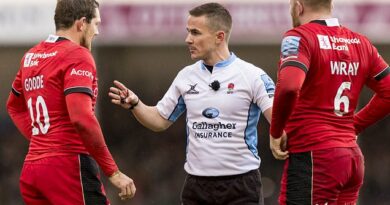 CHRIS FOY: Luke Pearce's approach to back-chat could be the benchmark