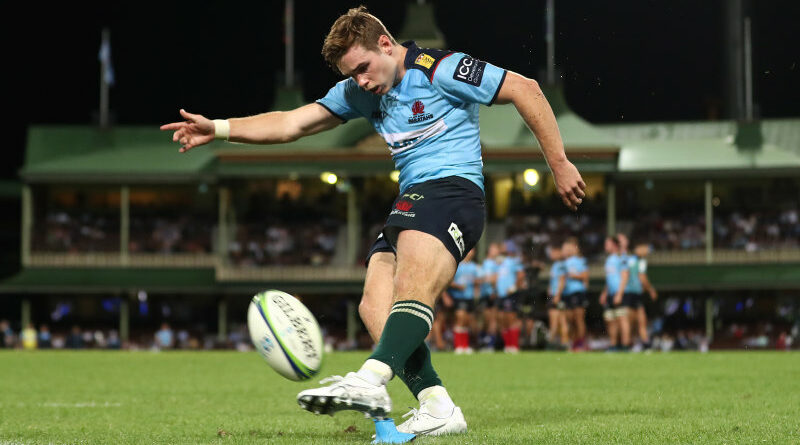 The Waratahs have fallen agonisingly short of the upset of the season so far in their first game without Rob Penney at the helm.

James Ramm scored a try after the final siren to give Will Harrison a shot from the sideline to send the match to extra time. 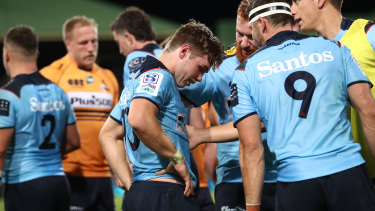 Will Harrison cut a forlorn figure at the end of the match.Credit:Getty

Whether Cheika will fill the vacant coach position remains to be seen. The performance would have given any aspiring coach hope the Waratahs can again be a force in the competition.

There were many bright spots, which have been scarce throughout the winless start to the season.

The forward pack can hold their head high. They matched the Brumbies and regularly put the home side in a position to score points.

Jake Gordon was man of the match in his return from injury. His playmaking, direction and cool head made a huge difference. 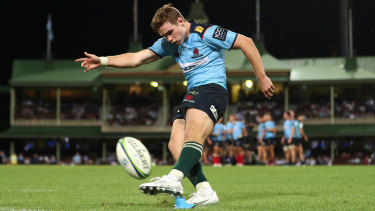 Will Harrison misses the final-minute conversion.Credit:Getty

Izaia Perese looked dangerous with almost every touch of the ball. Angus Bell’s first start since the Brumbies last belted the Waratahs was impressive. Will Harris was one of the Waratahs’ best.

In the first half, those bright spots were erased by some shambolic defence.

The Brumbies’ three first half tries – to Tom Banks, Andy Muirhead and Folau Fainga’a – all came from set piece. 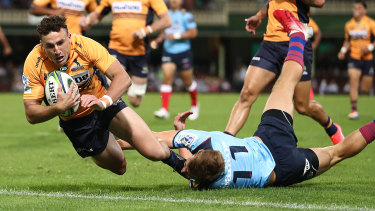 Tom Banks crashes over for the Brumbies.Credit:Getty

Trailing 24-10 at the break, Waratahs fans must have had a sense of deja vu.

Cusack was shown a yellow card for repeat infringements six minutes after play resumed but the home side didn’t capitalise on the one man advantage.

They did capitalise on a charged down Ryan Lonergan box kick when Lalakai Foketi pounced and popped a pass to Harrison.

The five-eighth scored and gave NSW a chance of completing an incredible upset, trailing 24-17 with 14 minutes to play.

When Ramm scored, it was more than a chance.

But the conversion sailed wide, Harrison cast a forlorn figure and the search for a win continued.

If this match was any guide, the Waratahs won’t have to wait much longer.

Castle digs in after ‘defending’ the game on Folau issue

Owen Farrell is wiser and happy to have tamed his temper