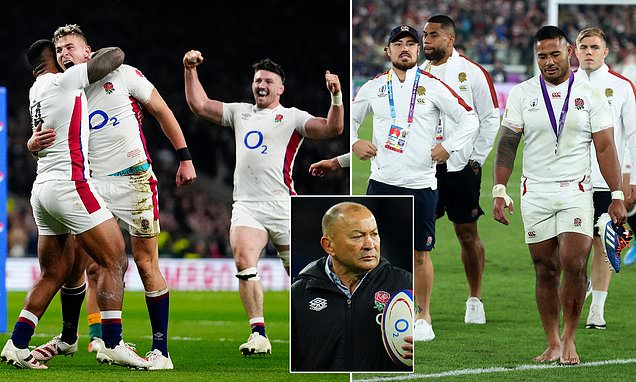 It’s time for revenge! England’s cutting edge was missing against Australia… now they MUST find it to beat South Africa in a repeat of the 2019 Rugby World Cup final

It was an eighth successive win over Australia, but there wasn’t much English euphoria. Eddie Jones and his squad were soon shifting their focus to the final autumn mission. Revenge.

The head coach is well aware that his rebuilding team will need to be a whole lot better against the Boks than they were against the chronically limited Wallabies.

England must take a giant step up to avoid being the victims of another South African knock-out, two years after they shattered their dreams in the World Cup final in Yokohama. 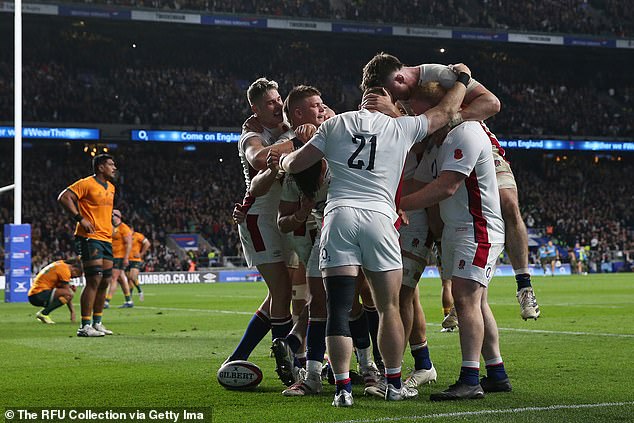 Jones set the scene for an epic Test by talking about preparing for a ‘final’ and taking the ‘scalp’ of the world champions.

There will be no shortage of motivation, especially for those players who were on the losing side in the 2019 final — and those who were part of the Lions squad who slumped to a series defeat in South Africa in the summer.

But a quest for vengeance will not suffice. England have to play with more composure and precision, as well as with fire and fury.

Against Australia, their scrum struggled against a patched-up Wallaby pack and there were damaging lineout lapses. Worse still, England were eclipsed at the breakdown by a visiting team who scrapped and spoiled to make up for a gulf in class.

Without the ability to build sustained pressure in a stop-start mess of a match, Jones’s men lacked a cutting edge after their stunning early try, finished by Freddie Steward.

The Leicester full back was excellent and the new, multi- purpose, rotating back line showed glimpses of potential. But it is a work in progress and the same could be said of the 10-12 alliance between Marcus Smith and Owen Farrell.

It would be churlish to be too harsh on victors who eventually won with room to spare, but their own response was candid.

‘If I am being honest, I think we are more satisfied with the result,’ said Kyle Sinckler. ‘We were a little scrappy and the breakdown needs to improve, set piece too.

‘We want to attack more and really take the game to teams, it just takes time. It is about finishing those opportunities off. At times it was good and at times it was sloppy. We will get there.’

Looking ahead to the showdown with the world champions, Jones added: ‘South Africa present a different challenge, based on the accuracy of their kick and kick-chase, the physicality of their forwards around the ruck and a very strong scrum.

‘The first thing we need to do is be really consistent in our scrummaging, so we don’t allow them access into our half.

‘We have to try to take away their maul and be really good at neutralising their kicks. If we do that, we can create opportunities to attack against them. We will go in prepared for that sort of game. 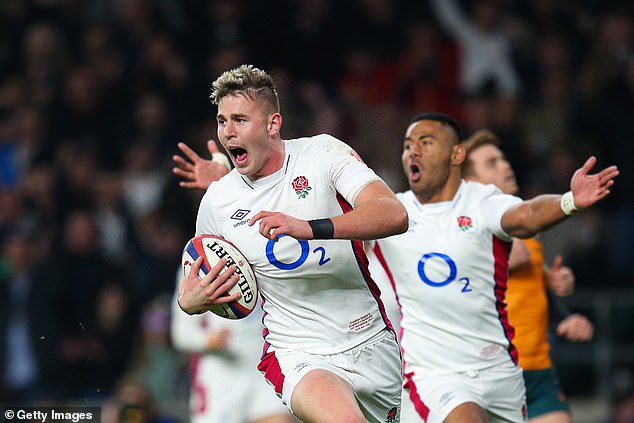 ‘Like any team, they have weaknesses in their defence and we’ll be able to find a few of those.’

Any desire to nullify the Boks’ kicking will rely heavily on Steward, who has made a ducks-to-water impact as a Test novice. It turns out that, initially, Jones had doubts about the 20-year-old Tiger, but he has hurriedly revised his opinion.

‘I remember seeing Freddie with Leicester last season and at first we thought maybe he has not got enough pace to play Test rugby,’ said Jones. ‘We brought him in in the summer to have a look at him. He surprised us with how much pace he has got.

These days, Sinckler is one of England’s senior players and the Bristol prop has been enthused by the presence of a core of rookies in the national squad — the likes of Smith, Steward, Raffi Quirke, Bevan Rodd and Adam Radwan. A desire to assist with their development motivates the 28-year-old, as does the chance to take another shot at the Boks. 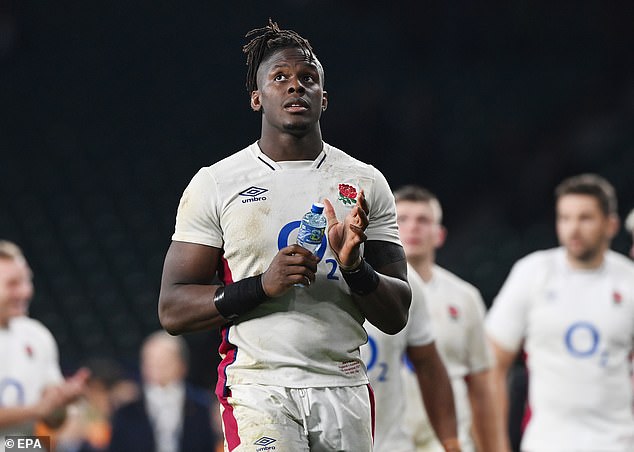 Sinckler was forced off early in the World Cup final after a collision which left him concussed.

‘I was only on the field for a minute or two,’ he said. ‘It took a while to process what happened. It was quite tough, but that is the universe’s plan for me and I have to just keep my head and use it as motivation now.’

Asked if the fixture against South Africa had been highlighted in his diary for some time, Sinckler added: ‘Yeah, I would say so. I was disappointed with the Lions result in the summer and obviously two years ago, how it ended.

‘So I’m very motivated to play. I want to give it all for my brothers. I’d be lying if I didn’t look at that fixture and was like — “I need to be ready for that game”.’ 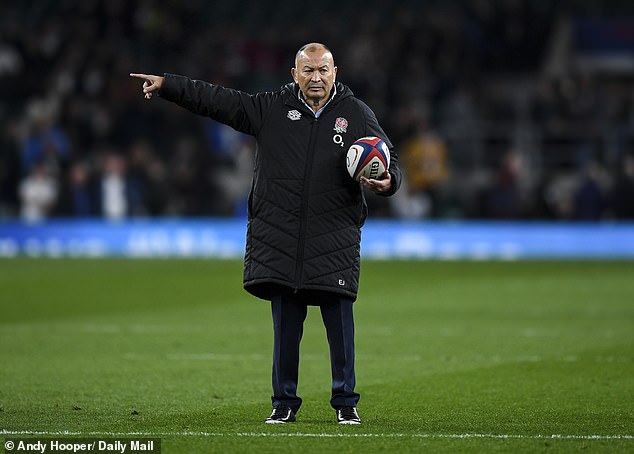 Eddie Jones has wound-up hype for the clash with the Springboks, aiming to take the ‘scalp’

Every England player needs to be ready. If they allow the Springbok pack to disrupt them as the Australian forwards did, they will be beaten.

If they squander chances as they did against the Wallabies, they will be beaten.

Time will tell whether Jones has a few more strategic tricks up his sleeve but, as the Lions discovered, trying to beat South Africa at their own low-risk game doesn’t tend to end well.

So there will be selection and tactical dilemmas this week, as well as the inconvenience of having two leading props — Ellis Genge and Joe Marler — isolating after testing positive for Covid.

England are two from two this autumn, but their new era needs a statement result.

Beating the world champions would tick that box.

Time to go with the flow, Jaco

England’s encounter with Australia was quite a come-down after the classic Ireland-New Zealand Test which preceded it and part of the blame lay with the referee. Jaco Peyper proved yet again that he is far too pedantic and lacks the knack for allowing a game to flow. His over-officious style was in stark contrast to how Luke Pearce oversaw proceedings superbly in Dublin.

Australians often refer to ‘whingeing Poms’, but it was the Wallabies rather than their English rivals who were constantly complaining at Twickenham. Michael Hooper is a fine player but the visiting captain was warned for constant protests and former Exeter scrum-half Nic White was another loud voice in a near-constant state of indignation. All the appealing was tedious and ineffective.

Irish must push on from here

Andy Farrell has taken time to really establish himself as Ireland’s head coach but the epic victory over the All Blacks has given his regime real impetus after an unconvincing start. The Irish have been here before, though, peaking between World Cups before failing to deliver at the main event.

Johnny Sexton was right to emphasise that this cannot be the peak.

Kolisi gets to the bottom of it

After South Africa’s win over Scotland at Murrayfield, captain Siya Kolisi celebrated by autographing the backside of a Springbok fan’s Y-fronts, in the colours of the national flag. Kolisi added a playful pat and shared a hug for the cameras. Before the game, he sent the South Africa women’s team a good luck message featuring him singing and dancing. The man really is some statesman.

Lowe down is right on

Leinster wing James Lowe was a try-scoring mainstay of the Irish win and added a hard-hitting style point afterwards when he said: ‘We didn’t play negative footy, like the stereotype South Africa. They’re not playing the game the way it should be played when they win games. We’ve got our own identity and it’s great.’

Fair play to Lowe for speaking his mind on this issue.

There was plenty of tension in Cardiff as Wales beat Fiji, but there was also plenty of joy. It was a delight to see veteran wing Alex Cuthbert (left)) show raw emotion after his brilliant finish, which helped avert an upset. And there was joy in Fiji’s audacious brilliance, too. They deserve to be added to the Rugby Championship. They can certainly compete with the elite. 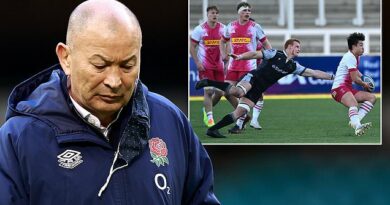 MIKE BROWN: I cannot see where England have kicked on since World Cup 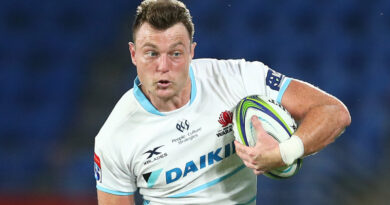